Weekends are family time at the Buxton house, and this weekend found us in Nederland, Colorado for the annual "Frozen Dead Guy Days" celebration.

This uniquely Colorado festival featured all kinds of family friendly entertainment with live music and a bounty of alcohol on the side. Here's a picture of my kids participating in the Coffin Race (their team came in second): 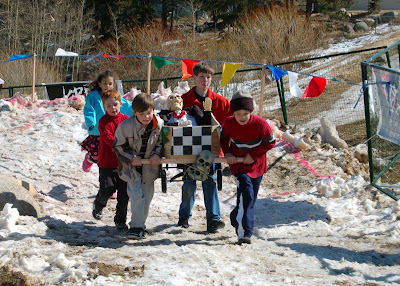 A good time was had by all, but I am completely worn out from the day's festivities. I had originally planned to skip today's post, but then I received one of those too-good-not-to-share emails from Allie in Memphis, Tennessee.
Allie writes: You said you liked seeing stuff people make from your tutorials, so here's my English bridle with laced reins. I only recently started being interested in model horses again as an adult, and this is the first bridle I've ever made. I wanted to do something a little different with the browband and cavesson, since as a kid my dream bridle had raised braids on them. Mom wouldn't let me get one because she said they were tacky (she was right) and too expensive (also right) but for a while in the early 80's they were a fad. Maybe you remember them. I had some trouble finding a picture of one so apparently not too many people use them anymore. The one I made was a little bit of an experiment, I'm not sure it worked perfectly but for what I'm doing, which is just taking pictures at home to amuse myself, the effect is great.
Here's my bridle: 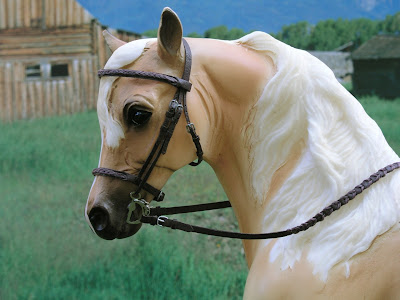 Isn't that a nice bridle? I'd never guess it was a first effort and it's certainly much, much nicer than the first bridle I ever made.
And I do remember those braided bridles. In fact there's still one of them in use at the stable where I ride. Here it is pictured on Tyson. 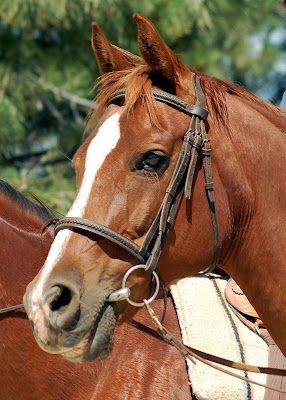 I've never made this sort of bridle in miniature, but suddenly I feel as though I should drive out to the barn and take some good close up pictures of the braiding just in case... Because, you know, I think it would look really nifty with another 1980's style suede flapped all purpose saddle...
Posted by Braymere at 4:46 PM

Labels: my family, Tack by other tackmakers