Yesterday's post described the events of the National Western Stock Show's Mexican Rodeo. Today I shift my focus to the tack used during some of those performances. Since I claim no particular knowledge of Mexican tack, this post is going to be long on pictures and short on text.

First up, the sidesaddle horses: 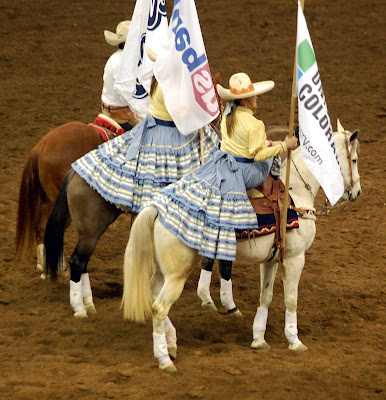 I would have loved to get a better look at the saddles, but it was impossible with those big skirts! 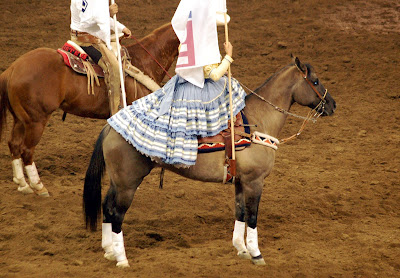 Since these horses were part of a drill team, they all had the matching cinches, breastcollars and pads. 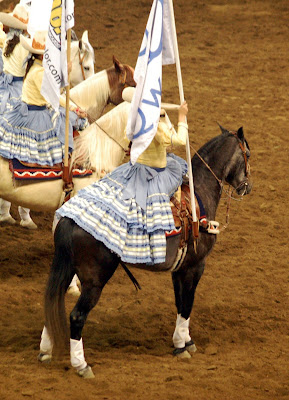 The flag carrier, which is usually attached to a stirrup, was buckled to the cinch instead. 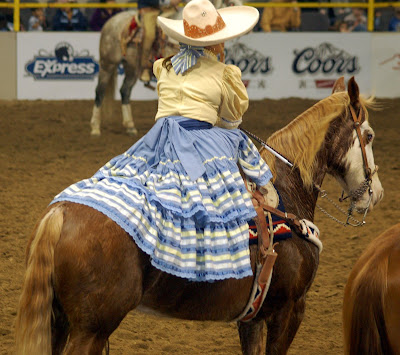 I took most of today's photos during the grand finale, at which point I had co-opted a recently vacated seat near the arena floor. As a result, these pictures are sharper than yesterday's and can be enlarged for better viewing. 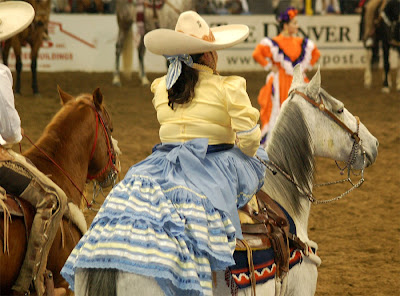 On to the Charros! This is Jerry Diaz on his Andalusian. 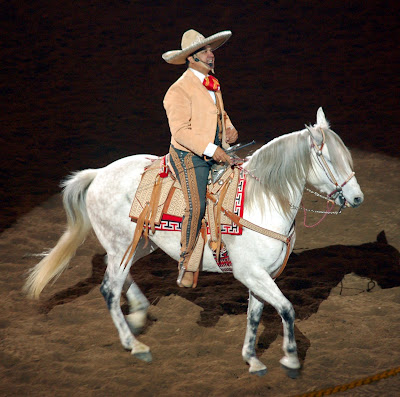 Jerry's Charro saddle is absolutely beautiful! The design is actually stitched into the leather. 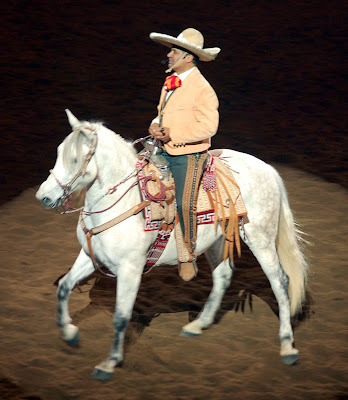 Jerry Diaz, again, this time on his roping horse. This saddle is similar to the grey's but looks a little more lived in. 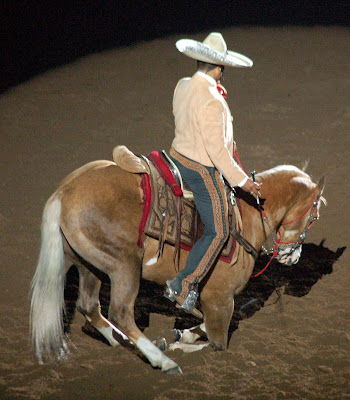 Does anyone know what that piece behind the cantle is? I didn't see anything like it on any of the other horses. Jerry does a lot of standing up roping tricks on this horse, so I suspect it has something to do with that. 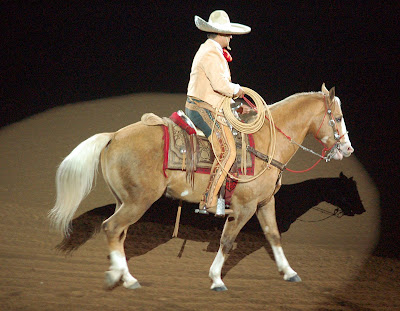 Staci Diaz. I think she looks really sharp in her green outfit. 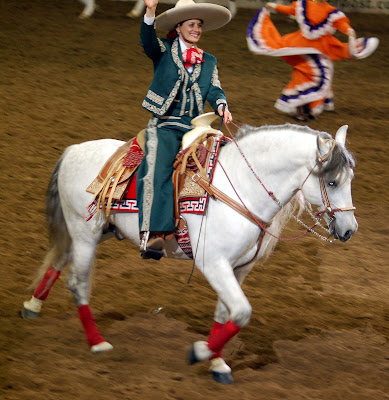 The rest of the Charros had plainer, work type saddles. 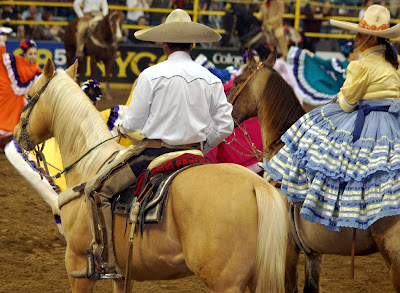 Red is a very common accent color and most of the horses wore at least one red tack item. 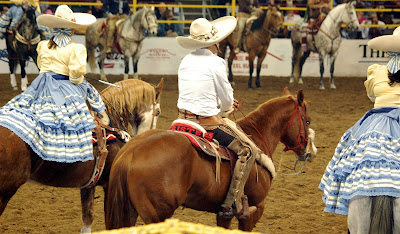 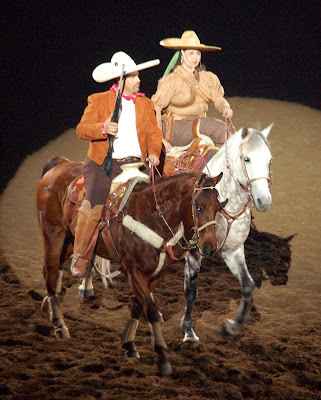 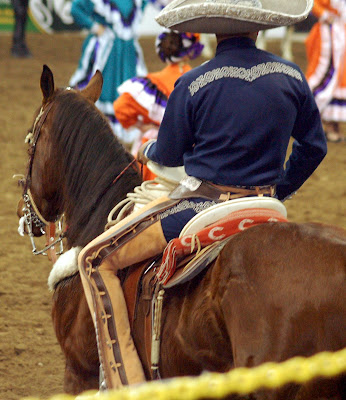 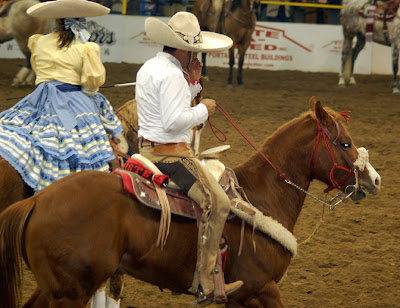 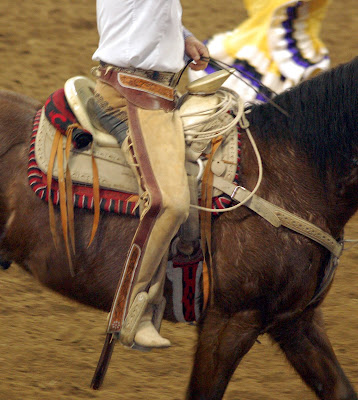 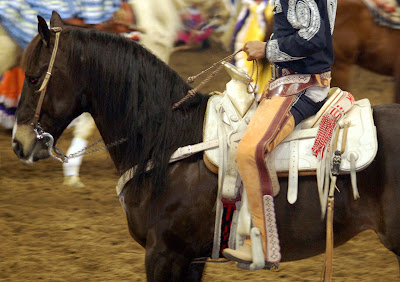 Bridles tend to be one eared style and very simple. They are often worn over a halter. 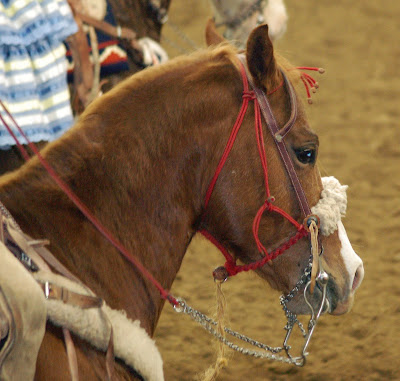 Every single horse in the arena was bitted in some sort of a curb bit and had closed, chain reins. Many also had nosebands, with or without a tiedown. 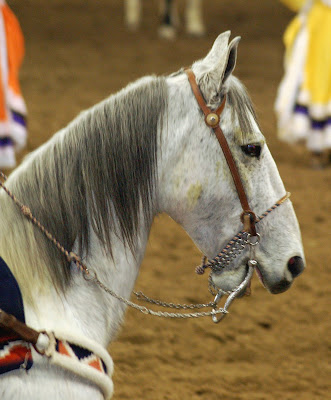 Model horse post tomorrow--I promise!
Posted by Braymere at 9:29 AM