I don't usually spend a lot of time in the studio on weekends and today has been no exception. Rather than update the Charro saddles lack of progress, I am going to share some pictures sent by my readers.

First up is this cute pony bridle made by new tackmaker Rachael Mogielski. Rachael was one of the winners of the Friends of my Blog raffle and received a box of basic tackmaking supplies which were immediately put to use. Looking good, Rachael, and I promise I will get that tutorial on laced reins up soon! 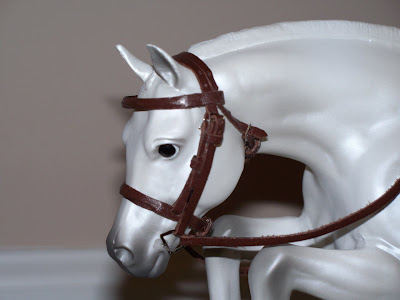 From the other end of the spectrum comes this lovely Charro set by the accomplished British tackmaker, Lauren Islip. 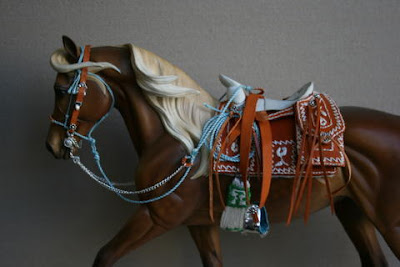 She writes: You're welcome to use these on your blog to carry on the theme if progress is slow (it was with me). For some more info, I used an Australian Dye, Saddle Tan, and combined it with natural coloured extra strong cotton (though it looks white in the pics). My saddle tree is painted with enamel paint, though it wasn't as hard-wearing as I would have liked. The rope articles were made by Rebecca Dunne of Griffindoon Ropes, and I added the leather coverings on the reins and noseband. She did a really good job, better that I could have done! 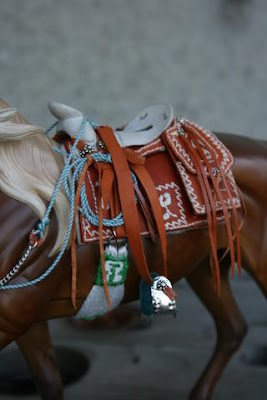 Having never seen one in real life, there was a lot of guess-work involved with the patterns and how things went together. I think it turned out ok in the end! 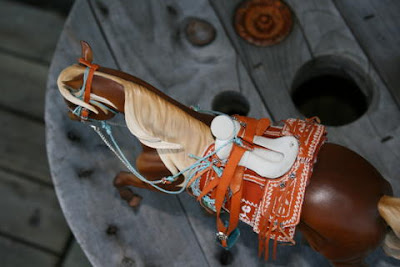 I think it turned out better than ok, Lauren. In fact I'd go so far as to call it pretty darn awesome. These stitched Charro sets are soooo labor intensive. It's no surprise that there are so few of them in the model horse hobby.
Many thanks to both Rachael and Lauren for sharing! Would you like to see some of your tack featured here? If so, please send a picture to braymere@comcast.net. I am particularly interested in tack that was made using some of my Tack Tip tutorials, but honestly, I'm not that picky!
Posted by Braymere at 3:36 PM