I bet you thought today's post would be entitled "The building stage" and would include in-progress pictures of the two Charro saddles.

Yeah, I would have liked that, too...

Unfortunately those saddles are going to be a long time in the making. It will probably be the end of the week before I've finished enough to photograph. In the meantime, I'm going to share some pictures from the National Western Stock Show parade which was held in downtown Denver last Tuesday. 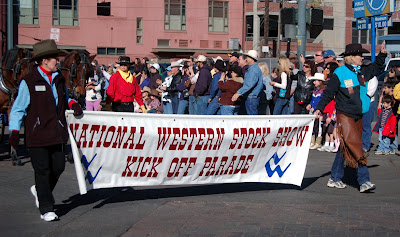 This was the first time I've ever attended the parade. I always want to go, but between the downtown parking difficulties and the high incidence of freezing cold weather... Well, it's just never worked out. This year, however, the stars were in perfect alignment. The sun came out, temperatures hit the sixty degree mark and my friend Teresa had a reserved parking spot just a block off the parade route--hurray, hurray!

The parade opened with the procession of the longhorns. 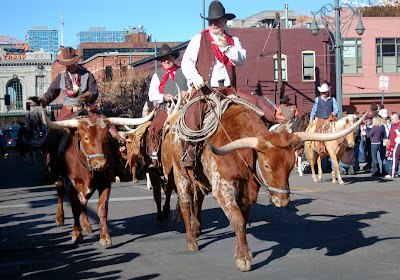 Close up of the longhorn's "bridle." I do not think this would go over well with a horse! 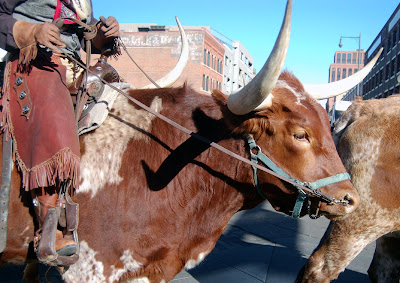 Here come the rest of the cattle. 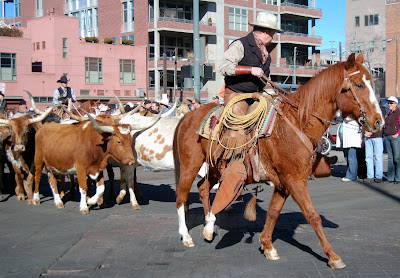 You know the Stock Show is in town when you see a giant herd of longhorns walking down 17th Street! 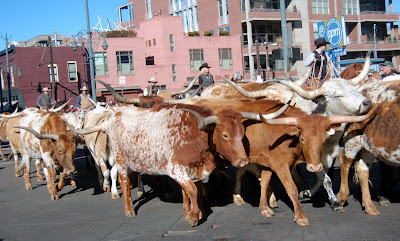 Just past our location on the corner of Blake and 17th was one of Downtown Denver's many vents for underground steam. For a moment, I thought the parade was going to come to an end almost before it started. The cattle stopped in their tracks and it took a lot of work on the cowboys' part to get them moving again. 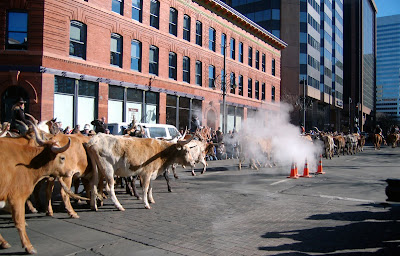 This became a common theme throughout the parade. None of the animals liked that steam much at all. 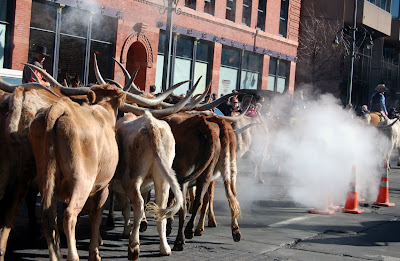 This cowpony is looking at the steam but also paying attention to the cattle. I just love how smart he looks! He is wearing a working style one ear bridle with a noseband and tiedown. 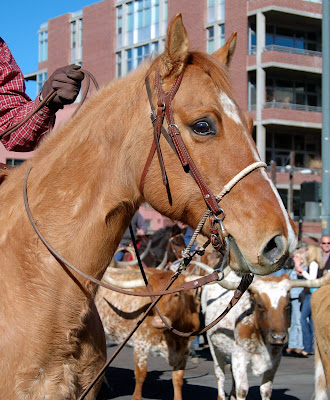 As the longhorn riders passed us, this cowboy turned around in the saddle to see what was coming up behind him. I don't blame him. There was a lot of good stuff back there... 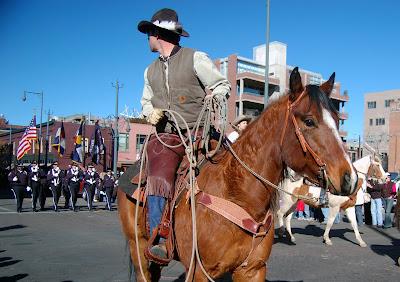 and I'll be sure to post pictures of the best of it in the days to come!
Posted by Braymere at 10:23 AM