I haven't always been an ultra discriminating resin collector.

When I was a kid, I had a true "this and that" collection. Basically, if it was horse shaped I wanted it. Breyers were my favorites because they looked the most real, but I wasn't picky. I proudly owned a few Hartlands, some made in Japan chinas, several Marx horses, a Hong Kong semi rearing mustang copy, one Julip and several rubbery toy horses.

And then there was this unmarked China horse: 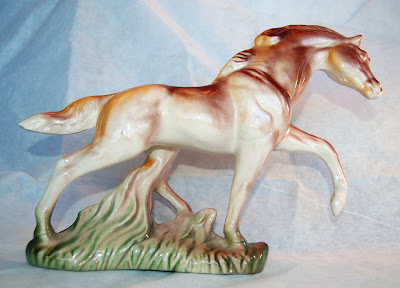 My mother found him at a thrift shop and bought him for me when I was eleven or twelve. This was after the institution of the Breyer ban so new models were few and far between. I was absolutely delighted with my new horse, and I didn't mind his big ugly base or the lack of color in his eyes. I thought he was beautiful and mysterious looking. I named him Flamingo. 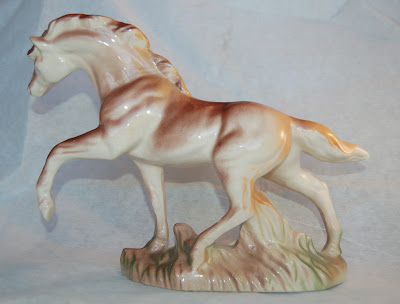 My best friend and I decided that he was a strawberry roan. Since Arabs don't come in roan, we also decided me was an Anglo Arabian (I know!). Because he was one of my favorites, he made countless trips between our houses. Amazingly, he survived without damage. Except for crazing over his entire body, he is in nearly mint condition. 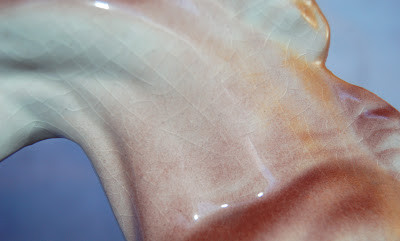 Some twenty years later, I saw another copy of this particular model in another collector's house. I asked her if she knew anything about him, and she said no, not really. However she went on to say that she'd been told he was probably a Maureen Love sculpt released by a small pottery in California. That sounded right to me. He does look a Maureen Love horse and I did get him in California. 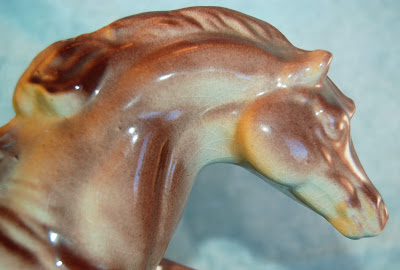 If you have any more information about my dear old Flamingo, I'd love to hear from you. In the meantime, he remains my much loved, beautiful mystery horse!
Posted by Braymere at 1:06 PM