Something really different for you extreme performance types

There's been an interesting discussion in the performance forum of Blab regarding what makes an entry suitable for a "Natural Trail" class as opposed to a "Scene" class. Opinions vary somewhat by region and mostly focus on whether the horse is actually negotiating an obstacle on the trail rather than simply being ridden outside a ring. Well, I have an idea for one of you really enterprising performance specialists. This one would work well with a standing model, but you'll have to decide for yourself which class to put it in! 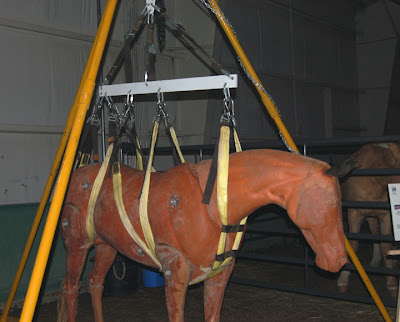 My boys and I saw this apparatus in the display barn at Halloween With Horses last weekend. Ryan--always the engineer--was drawn to it immediately. He asked me what it was and all I could do was shrug and say "Some sort of a horse sling." Thankfully there was someone there who was able to explain it a little better than that. 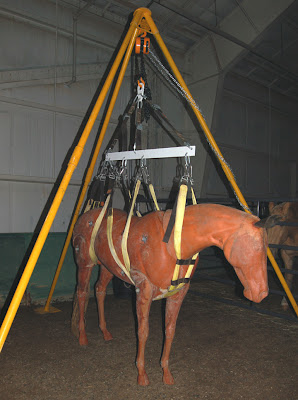 So here's my out-there idea for a natural trail or scene set-up. The explanation card would read--"This horse and rider's idyllic trail ride nearly ended in disaster when they fell into a ravine. Luckily, the local rescue organization was able to erect this apparatus over the ravine, strap the sling on the horse and lift him to safety". Pretty cool, huh? 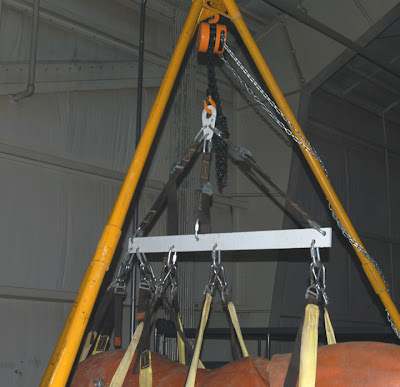 Well, that's my creative thought for the night. I'm going to go watch Mythbusters with the little engineers!
Posted by Braymere at 7:03 PM