The great racehorse John Henry died October 8, 2007 at the age of 32. The Kentucky Horse Park--which was his home after he retired from the track--will be erecting a statue in his honor tomorrow. You can read an article about it here: http://news.bloodhorse.com/article/47431.htm?id=47431 I think it is a very attractive statue and a great monument to a real champion. 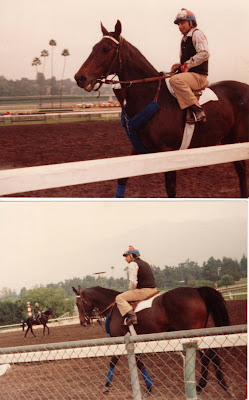 I grew up in Southern California not too far from Santa Anita Racetrack. My parents are neither horse people nor gamblers, but they did take me to the track fairly regularly and I was lucky enough to see a lot of the great racers from the late 1970's through the mid 1980's. I saw John Henry race several times including his last "Big 'Cap". I took these pictures of him at during early morning works sometime in the early 1980's. 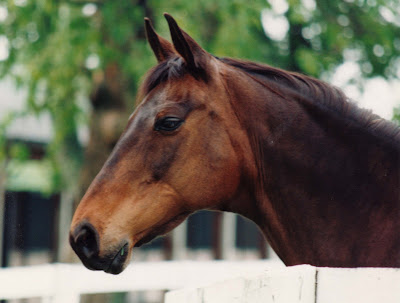 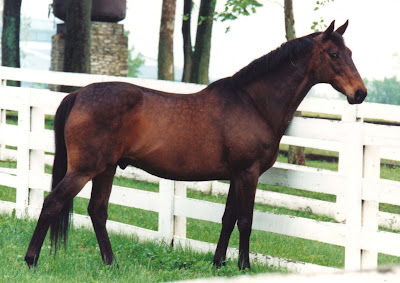 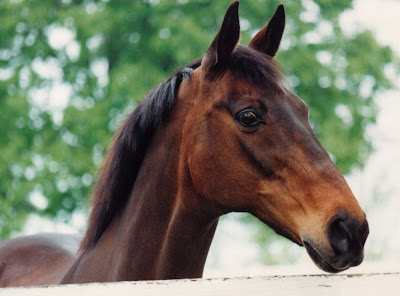 I renewed my acquaintance with John Henry ten years later when I was working for a mobile tack shop based out of Memphis, TN. We usually spent five weeks each year vending at the Horse Park during some of their large A-rated Hunter/Jumper shows. I loved going to the Park (what horse lover wouldn't?) and one of my favorite things about being there was visiting with John Henry. I took these pictures of John hanging out in his pasture after hours. Everyone always talks about how bad tempered he was, but he seemed positively peaceful this particular day.
Posted by Braymere at 1:08 PM