First off, I want to thank everyone who is reading this Blog! I had a really nice response to the advertisements I placed on MH$P, Model Horse Blab, the Watering Hole and the various mailing lists. I especially want to thank the people who have signed up to follow the Blog, sent pictures, added notes to the comments section (I love those), or emailed me personally. Although I can't promise I'll add a new post every single day, I do plan to update this Blog regularly with the same basic mix of pictures and text. The Tack Tips post was very well received, and I expect to continue doing that sort of thing in the future. If you have ideas for topics you'd like to see covered, feel free to send them along. Just be sure it's something small enough that I can cover it in one post! 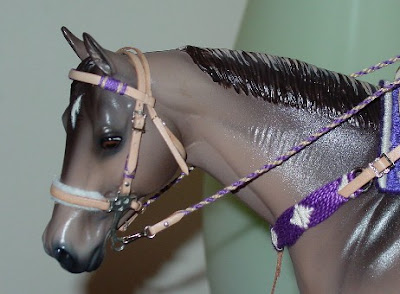 I also have an idea for another semi-regular series involving tack requirements for different performance classes that will cover things such as what is legal/illegal, what is most commonly used and how to put it all on. I'll probably start with hunters and jumpers since that's what I'm best at, but again, I'll happily take suggestions! 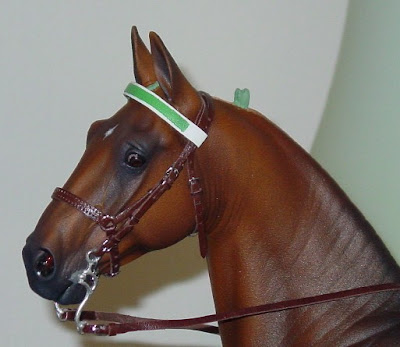 I've had a few people inquire about orders, and while my tack books aren't closed, I'm mostly booked up through the end of the year. That's not a hard and fast rule. If you need something in a hurry, I may be able to accommodate you, but no promises. Email me privately for specific prices and time frames. As a general rule, I do take time payments and some trades. However, I'm pretty picky about what I'll trade for so don't be too surprised if I turn you down!


Thanks to Bev Manderfeld for today's pictures. The top horse is a Carol Williams Matriarch painted by Bev herself. I made the hackamore but not the breastcollar. The lovely Indy resin was sculpted by Sarah Rose and painted by Tom Bainbridge. Both the hackamore and bridle were made in 2007.
Posted by Braymere at 5:26 PM