Back in August, Kellye Bussey contacted me to see if I would be interested in building a one wheeled device that is used to train horses and riders in the "art" of bullfighting. She sent me a picture of what we soon dubbed "the contraption". I'm not really known as a prop maker, but I have made a lot of props for my own use and I thought this might be an interesting challenge. Kellye sent me some wheels and I raided the aluminum tubing section of my local hobby shop. I borrowed my husband's drill and went to work. 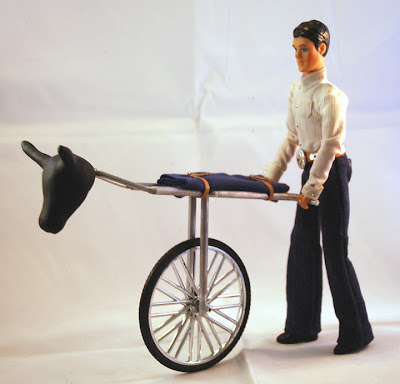 My first attempts at building this were completely nonproductive. Although the tubing was pretty soft, I wasn't able to cut it well with anything I had on hand. Time after time, I mashed the tube into itself so it lost its nice, round shape. I also struggled with drilling holes into a rounded surface. The design I'd come up with was fairly complex and suddenly the whole project seemed overwhelming and impossible. I set it aside and worked on some other orders. 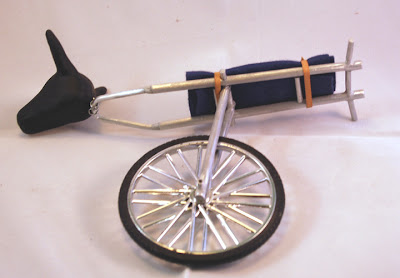 Time passed. The tubing remained on my work table, but I hadn't touched it in several weeks. Then I got an email from Kellye asking if I was making progress. She had a show coming up and would really like to have the contraption to use in the scene class. I need reminders like that to get myself motivated sometimes. I set aside the "easy" order I was working on and revisited the hobby shop. I bought a little hacksaw that made quick work of cutting the tubing. I discovered that I could use one of the awls I already had to poke guide holes into the tubes before I drilled into them. Most importantly, I simplified the contraption's design to a more manageable degree of difficulty. 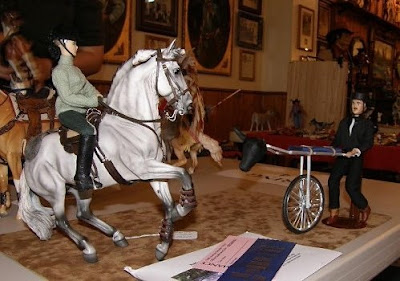 And here is the result! Kellye's contraption made it's live show debut in the scene class at Red River Live this past Sunday, and now her Alborozo is NAN qualified in performance! Hurray! Her explanation card read that this depicted a Doma Vaquera Clinic with a Portuguese instructor and clinic attendant. 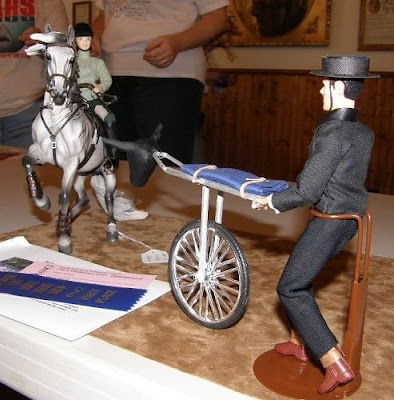 Isn't this a cool set-up? The Portuguese tack is by Vicky Norris and the dolls are by Joan Yount and Amy Showalter. The doll in the top picture is by Mary Jahnke. Special thanks go out to Regan O'Keefe who is my go-to person for all things Iberian. She helped me immensely with this project by finding lots of pictures of a similar contraption being used at a real DomaVaquera clinic.
Posted by Braymere at 5:50 PM