Across the globe, NaMoPaiMo horses are finding success inside the live show ring. Here's a quick round up of some of their most notable triumphs

Our journey begins with Ondřej Moučka in the Czech Republic. He writes‎: My NaMoPaiMo pony debuted in the annual Moravia Live Show hosted by Pavla Pernicová, and she just slayed the competition! She won Appaloosa pattern and then became Colour Champion and later won CM Stablemates and 3rd place in all Breyer CM. So happy and proud of her. 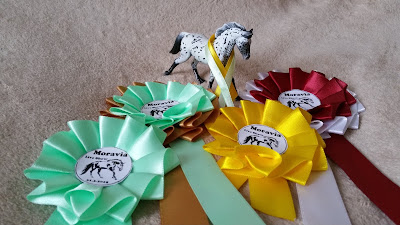 In England, Natalie Nimblette's Wrona had a similarly successful show ring debut. Natalie says: It was my NaMoPaiMo's first outing into the show ring yesterday and she came home with Supreme Champion!!! Very proud of my cheeky little fuzzball. 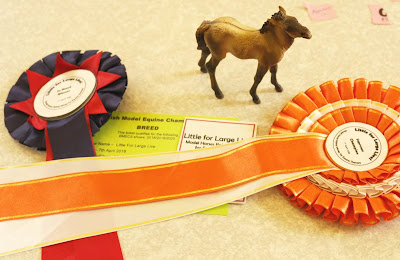 Kim Brandner's unicorn was also a first time winner, placing first in the Fantasy class at at Liveshow Franken Pfeffi in Germany. 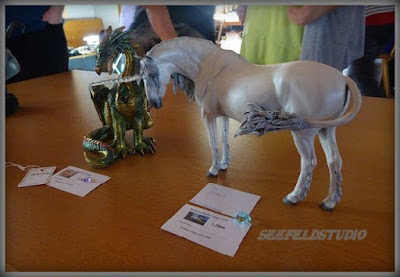 A bit closer to home, Lynn Cassels-Caldwell's 2017 NaMoPaiMo horse, Fadjeyn, won Reserve Champion Novice Performance at Toronta Live. Fadjeyn is now owned by Catherine Scholz. He is shown in a presentation set was by Dee Crawley. 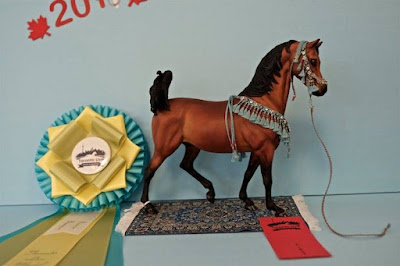 Neena Bickram also showed at Toronto Live and shared her "tried-and-true formula for winning a championship ribbon: forget to bring your camera." Fortunately, Andrea Brydigyr was there to snap the victory photo. 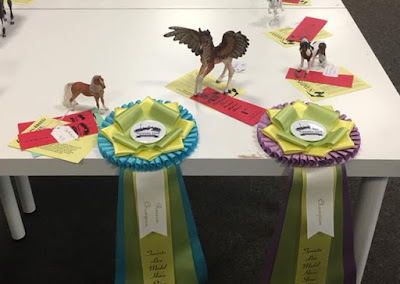 Twyla Wehnes' Spring Round Up Live in Alberta, Canada included an “I Did It Myself” fun class at lunch. Meredith Conrad showed her 2017 NaMoPaiMo horse, and he won thisa wesome little sculpting/painting box donated by Rayvin Maddock. Meredith writes: I’m super happy about my NaMoPaiMo pony giving me more reasons to customize! 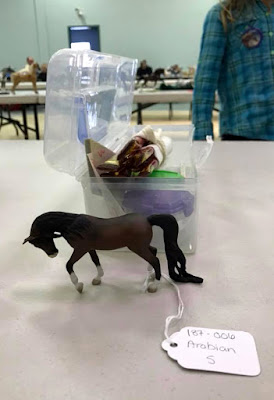 Tammy Turner's 2018 NaMoPaiMo model, Ke Kani, also won an art kit in the "I Did It Myself" class. Additionally, he placed second in Other Breeds and second in Fantasy Colour! 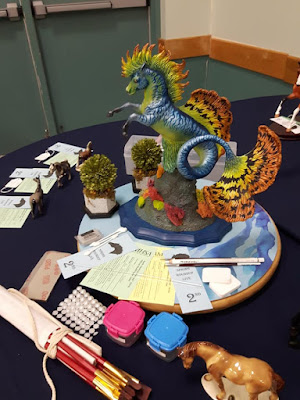 Canadian Beth Peart crossed the border to show her 2018 NaMoPaiMo horse, Kelven, at the Finger Lakes Spring Fling Hammondsport, New York. He made the trip worthwhile with this big win the Light Horse Division. 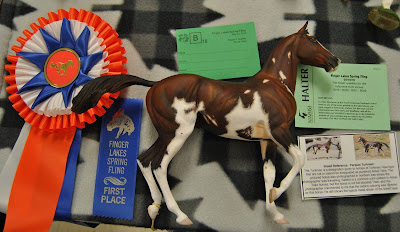 On to the US horses! Ryan Jaeger's 2018 horse won its breed class at SoCal Live... 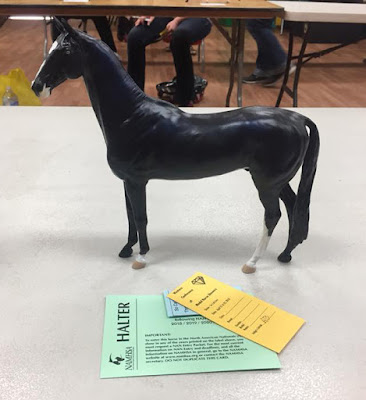 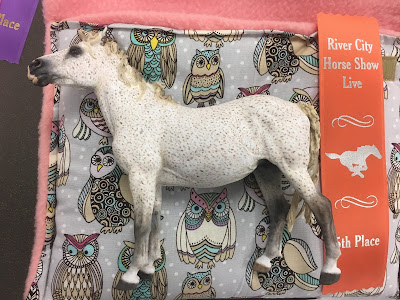 Kate Springer's tiny bay was a super star at  his first show. She writes: My official horse made his debut today, and he did great!! He got first in color workmanship and design workmanship. So happy with how he did and how far I have come as a painter. 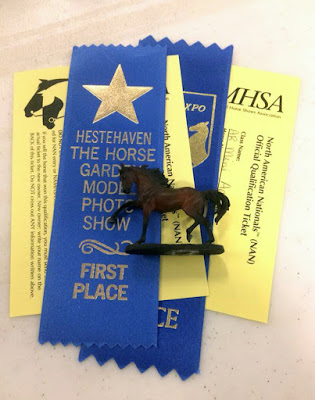 Emily Gillis' zebra, Ophelia, did almost as well, with a first and second at the same show. 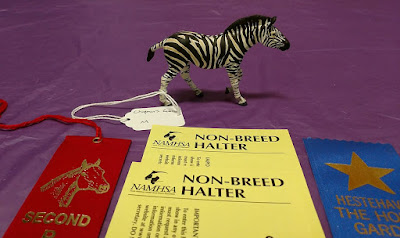 In Arizona, Pam Vigo's Annabelle won a good ribbon in the Fantasy class. 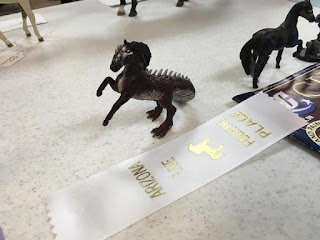 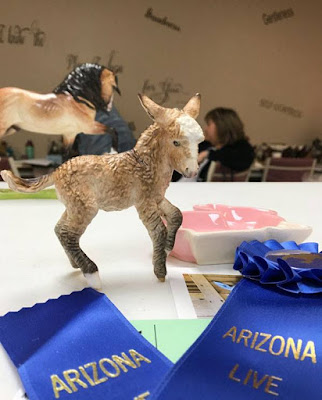 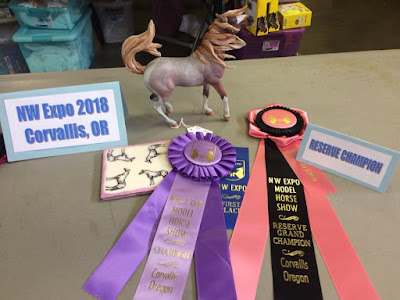 and Renee Jordan and Beatha Sellman showed in the NaMoPaiMo class at Lemmonade Live in Montgomery, Texas. 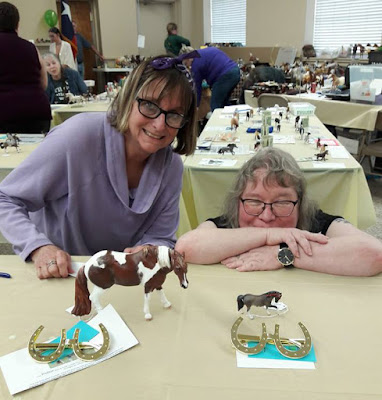 Stacy Quick and Shana Bobbitt both showed at Jolts Jubilee in Kamiah, Idaho over the weekend. Stacy's 2018 horse won a red ribbon... 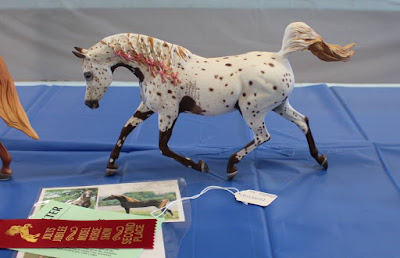 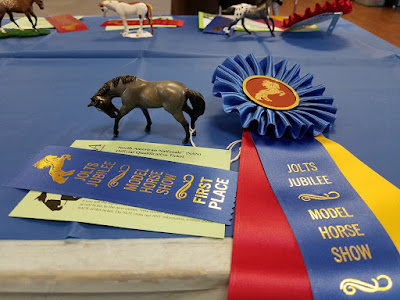 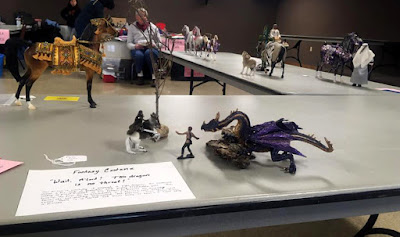 Sondra made the horse's costume out of a mouse skin she tanned herself. Amazing work, Sondra! 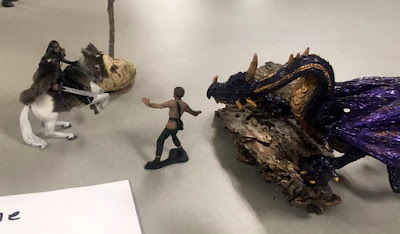