One of my favorite parts of the Jennifer Show was watching Sandy Sanderson show thirty six different horses in the performance division. Her energy and enthusiasm was contagious, and she totally rocked the Overall Champion Shower concept. I asked her to write a guest post about the experience, and she rocked that, as well. Thank you, Sandy. I love you, too, and I would have totally given your Chia pony a NAN card!

But I had almost forgotten how much I love her.

At Jim West's funeral last fall we showers in Colorado decided we would always to try to remember to say "I love you" more often to each other.

Driving to the service, Jenn and I actually got to spend some quality time together, which had been a long time in coming, but that is for another post. Suffice it to say, I love Jenn Buxton, and all my fellow showers. 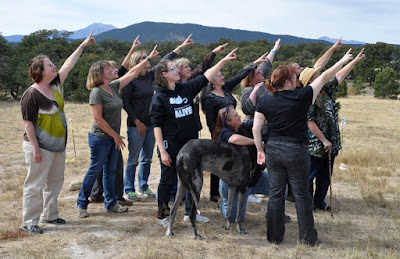 When Jenn and Jennifer Scott announced The Jennifer Show, I had NO idea how fabulous this show would be, but I was still determined to carve out time to prepare some new and fun entries for performance. The fact that Jenn was tempting me with a saddle as grand prize was also incentive, as  I've been on the waiting list for a while, and it IS more fun to win one! But then, when ALL the unbelievable prizes kept pouring in from hobbyists, well, I was really pumped.

When the format and class list came out, my brain really started smoking! During my daily 160 mile round trip to a job in another town, I would make mental notes. Talk about distracting driving!

First and foremost, I was so excited that I didn't have to show just one or two horses. Every time I leave for a show, I feel remorseful  leaving all my other fantastic performance horses at home. I'm known to throw in a few Halter horses, mostly out of guilt for leaving ALL those horses on their shelves. But the Jennifers came up with a way to have TWO Overall Performance Champions! Which meant there would be TWO ways to win a Braymere Saddlery saddle!! #1. customary overall horse by points, AND # 2. overall shower by points like in "alive"horse showing. (vs live showing lol)

I've been model horse showing for almost twenty years and have kept all my NAN Champions and all my retired Breyerfest Live Champions and I'm almost as bad of a tack junkie as Tiffany Purdy. I mean, who has four parade saddles??? I'm outta control. 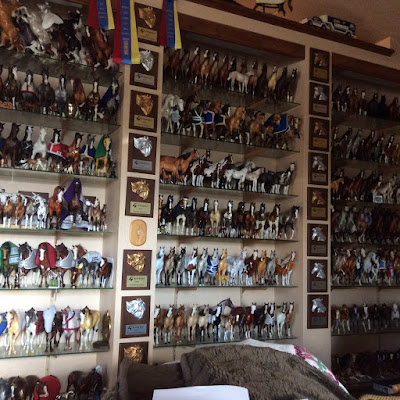 So I thought......wouldn't it be fun to show a different horse in EVERY class? Or as many horses that I had tack for per class ? Think of how many different horses I could bring!

Along with still having to decide what horse, reference material, tack and props I needed for each class, (which I consider fun) I was able to make a costume that I felt would make Jenn laugh.

I thought my entry for Fun Costume would actually have a chance to win but that class was tough! (As was every class). But it didn't matter that I spent HOURS every evening, hand sewing every individual branch on this costume, or that it only got fifth place. What mattered was Jenn's laughter when she saw it. I KNEW that entry was what she had in mind when she listed that class. 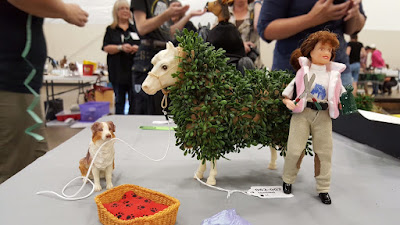 Then, a couple days before the show, I thought of another Fun Costume entry that she would enjoy, as would Ryan. Another late evening "entry creating session" in my new studio..... 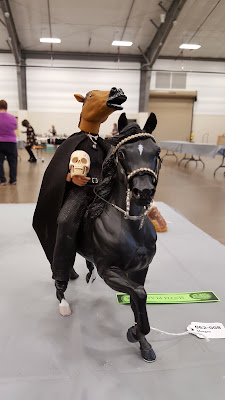 All in all I showed thirty six horses, in twenty seven classes. And I only missed showing one horse. Yes, that's TWO tables of horses. 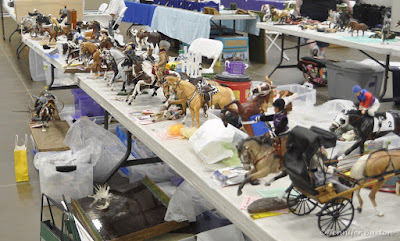 In the end, I won Champion Shower and my show buddy, Lu Heater, won Reserve Shower. 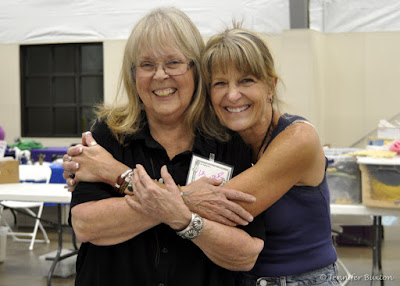 And I had sooo much fun, 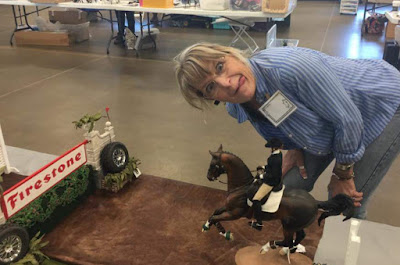 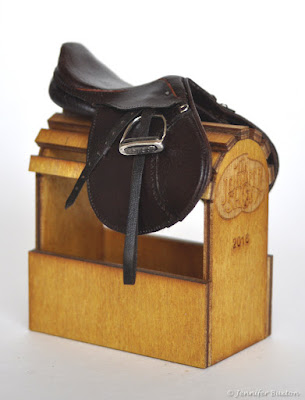 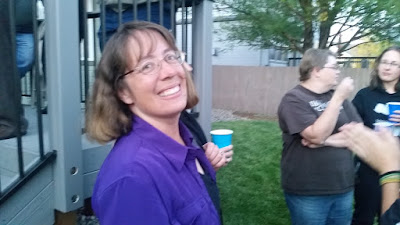