Every now and then I see something on Model Horse Blab or Facebook that is so exceptional, I immediately ask to re-post it here.  This is one of those occasions.  The photos and text in this series come from Blab member Eleda of Triple Mountain Model Horses and My Little Ponies.  Many, many thanks to her for allowing me to share!

We recently made the 3-hour trip to Hartland, Maine to meet Mrs. Winnie Russell and Philip Russell, the wife and son of E.C. Russell. Philip has built a wonderful museum in tribute to his father's work. Please join me in a tour of this incredible little museum. Be forewarned, though. What you are about to see are works of art, not collectible models. Many have been painted, repositioned, etc., to suit the piece. I hope you'll enjoy them as he intended.

There's no place to start but at the center! The centerpiece of the museum is a 40-Horse Hitch... 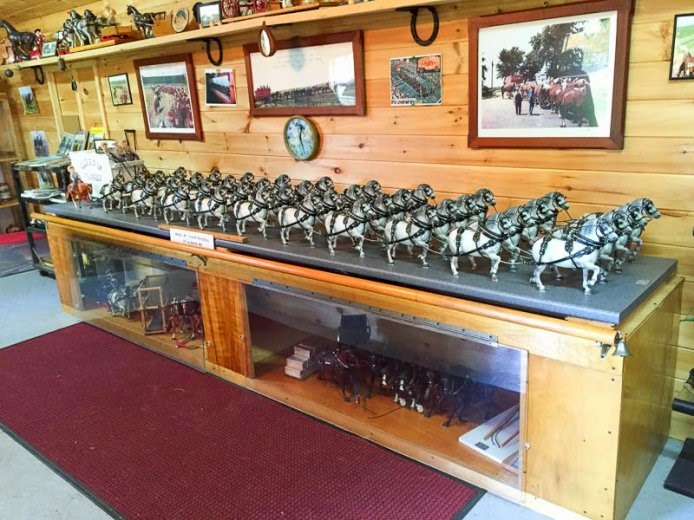 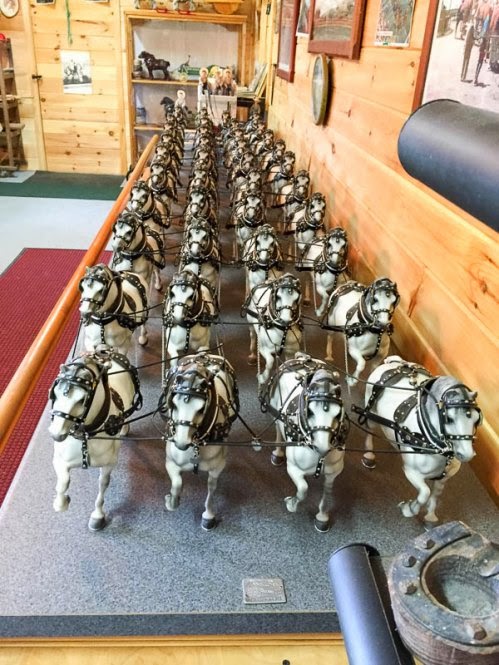 The hitch is twelve feet long, an includes a primitive-styled Circus Wagon and two outriders on Zippo Pine Bar models. 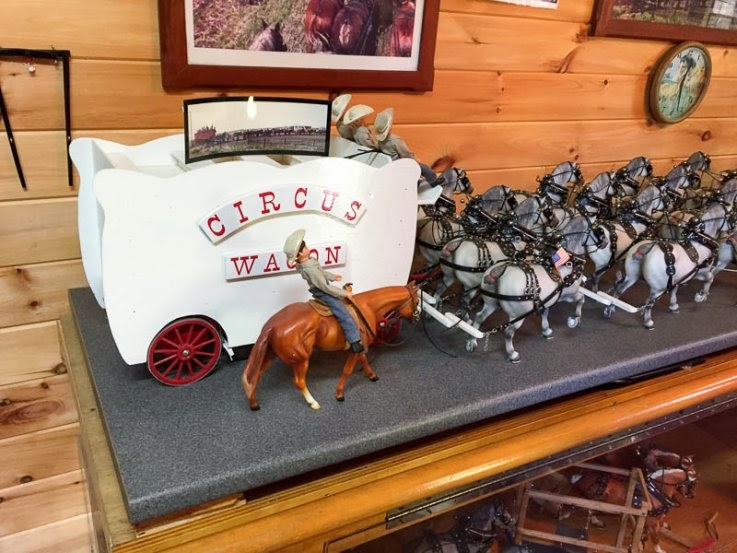 Okay, I should have fixed the lazy rider before taking the pics, but hey, I was a little overwhelmed! I was also confused... I'd seen his 40 Horse Hitch before, and even though it was almost 25 years ago, I knew darned well it had been 40 Roy models pulling it, not BGLs. Winnie told me I was correct, and that this was actually the SECOND 40-Horse Hitch. In 2003, as his original's fame had spread, a collector for the Ringling Museum in Sarasota, FL, had made him an offer he couldn't refuse and purchased the original for several thousand dollars. Clair and his son had wrapped the entire thing in bubble wrap, then a blue tarp, and secured it "with a whole roll of duct tape," according to Philip, who was then charged with driving it in the back of his truck from Maine to Florida, with two feet of it hanging out over the tailgate the whole way. He was greatly relieved when they arrived and found that it survived the trip in perfect condition. 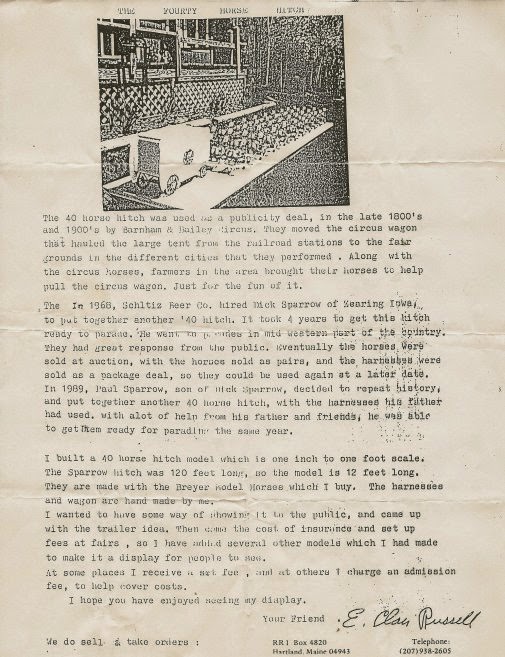 That was in November. When Philip arrived home from Florida in March, his father had already finished this new display, having worked on it all winter long! He didn't like the Roy mold, so even though it better resembled the Dick Sparrow's actual 40-Horse Hitch, he opted to change to the Belgian, which he loved. To really appreciate the work required, check out this harness work, and remember it was done by a man in his 70s... and then done AGAIN forty times over! 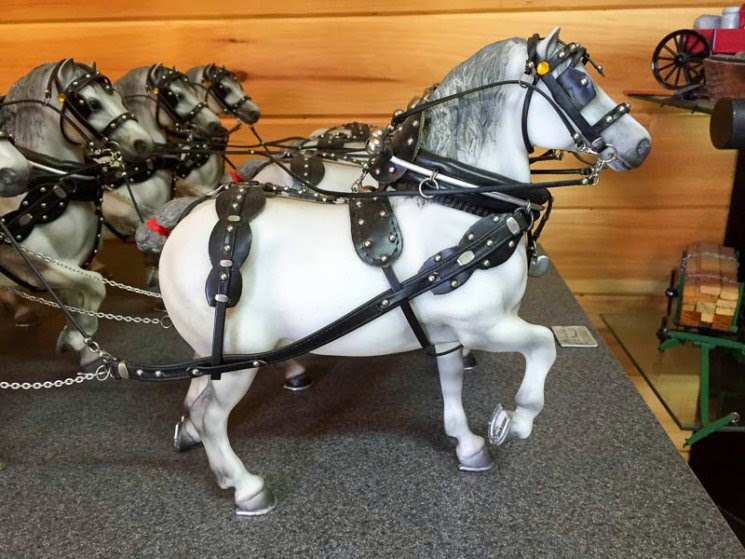 Check out how on each horse, the outside rein is attached to trace of the horse leading him. I don't see how that would function in real life, but it's an interesting and elegant design to look at, especially in this magnitude. Philip mentioned that after the hitch was completely finished and secured to the base, Clair realized that he'd forgotten to shoe them! Never one to let extra work keep him from getting the details right, they took all forty horses off the base, handmade all 160 shoes, with caulks, attached the shoes, and then re-secured the horses! 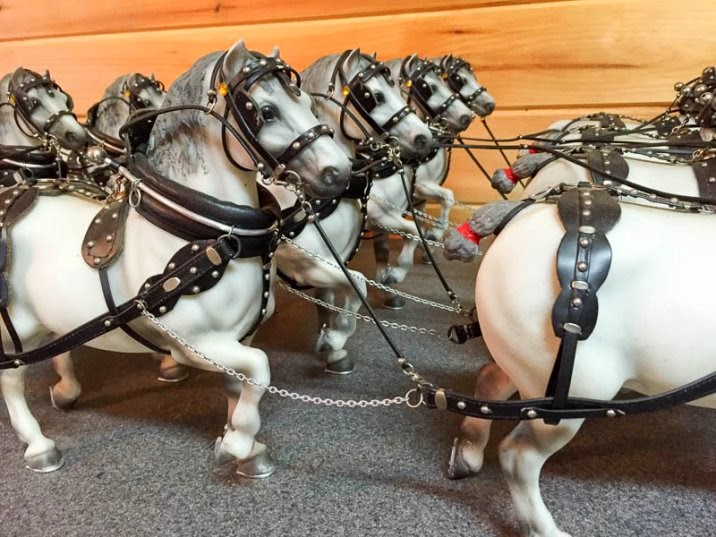 While his most famous work(s) is the 40-Horse Hitch, it's only one of about fifty hitches on display in the museum. 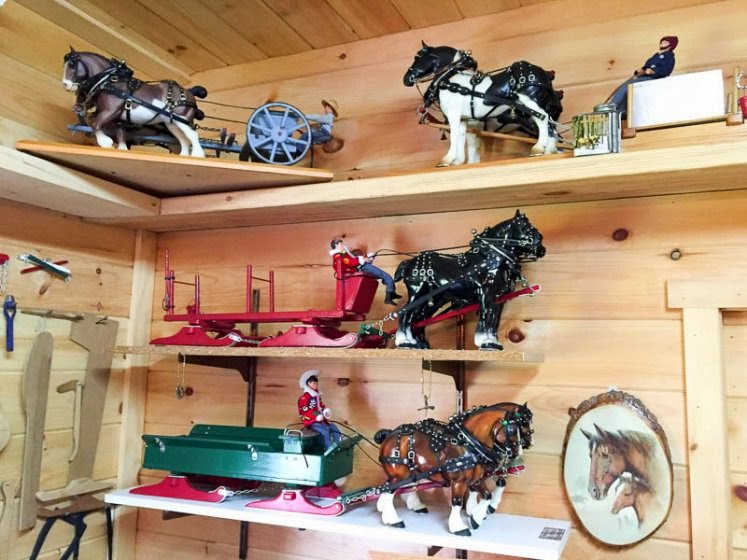 What's about to follow is a long photo spam, because I know you all like photos as much as I do. Get comfy! 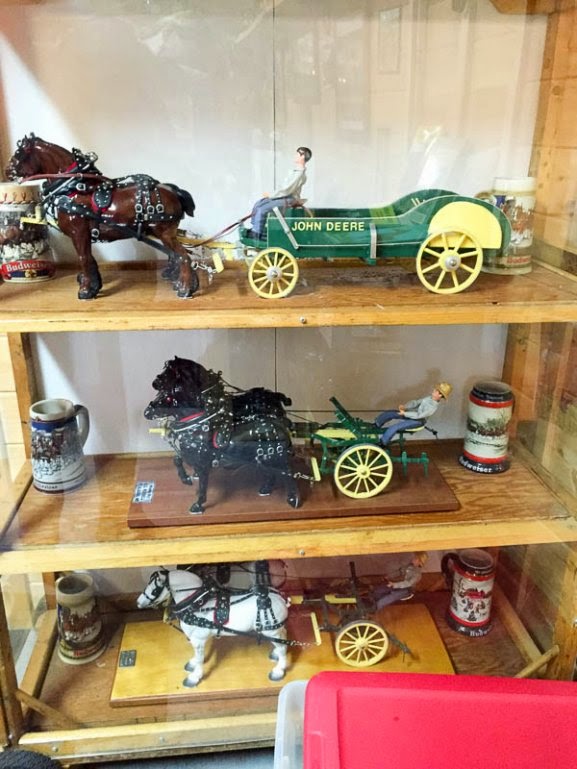 Yes, Clair DID get to go out and not only see the real "40," they let him DRIVE it!!! It was during practice for a parade, in a field, and Philip tells us he was so excited that they were actually there, that he, being charge of the camera, took an entire roll of film as the trainers brought the team by again and again... And then suddenly his dad was in the driver's seat.... and he was out of film!!! He says he got severely tongue-lashed for that, but at least his dad got a hat to prove he'd done it. 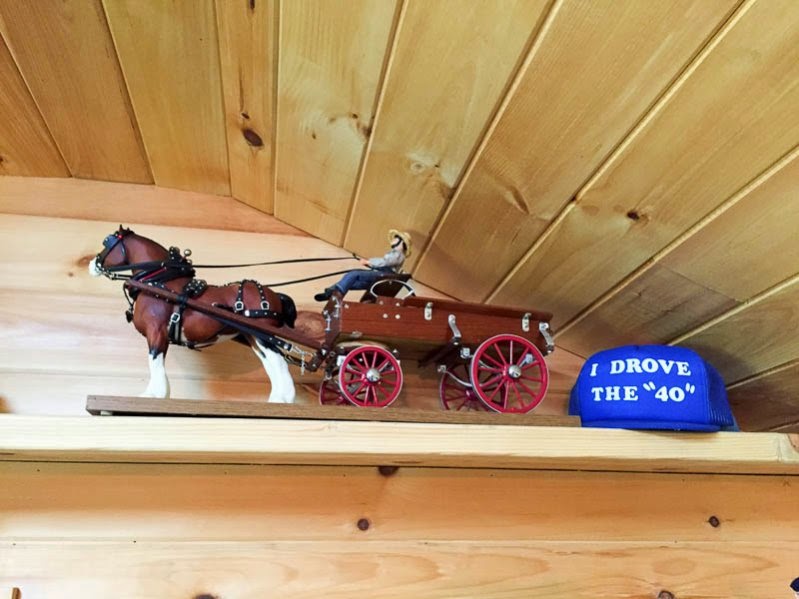 Note framed photo of the "40" taken by Philip under the Clyde Mare hitch. 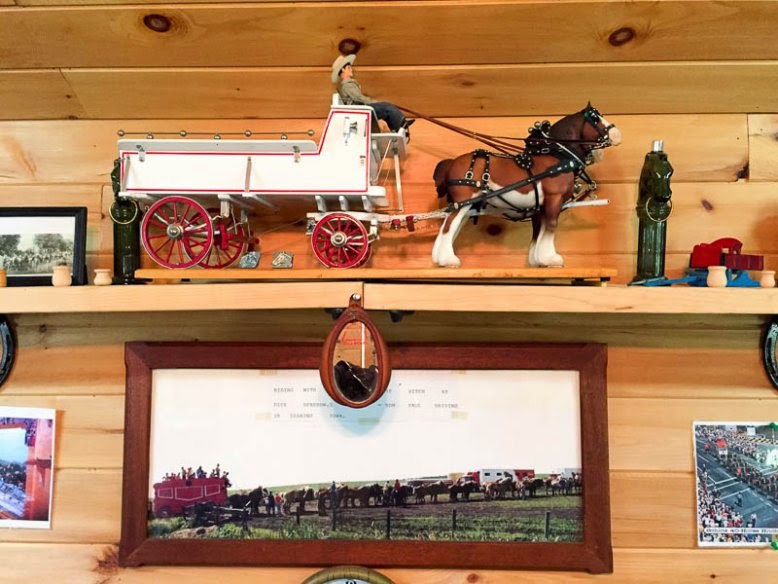 Someone please tell me if you can identify the copper/bronze plated Clydesdale in this photo. He's really made of metal and is attached to a wooden base with felt pads. No identifying marks that we could see. (Of course, his origin made no difference to Mr. Russell... It's a horse, let's harness it! I love that.) 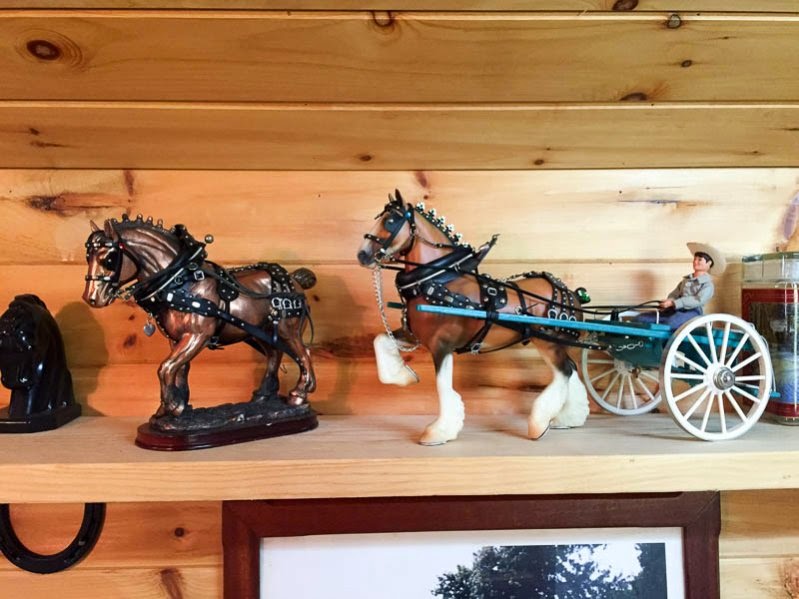 I love this, too!

There's still a lot more to see.  Stay tuned for the next installment!
Posted by Braymere at 10:09 AM