I checked my email yesterday evening and found multiple messages titled "Anne Field tagged you on Facebook."  This can only mean one thing:  Yay! Live show pictures! 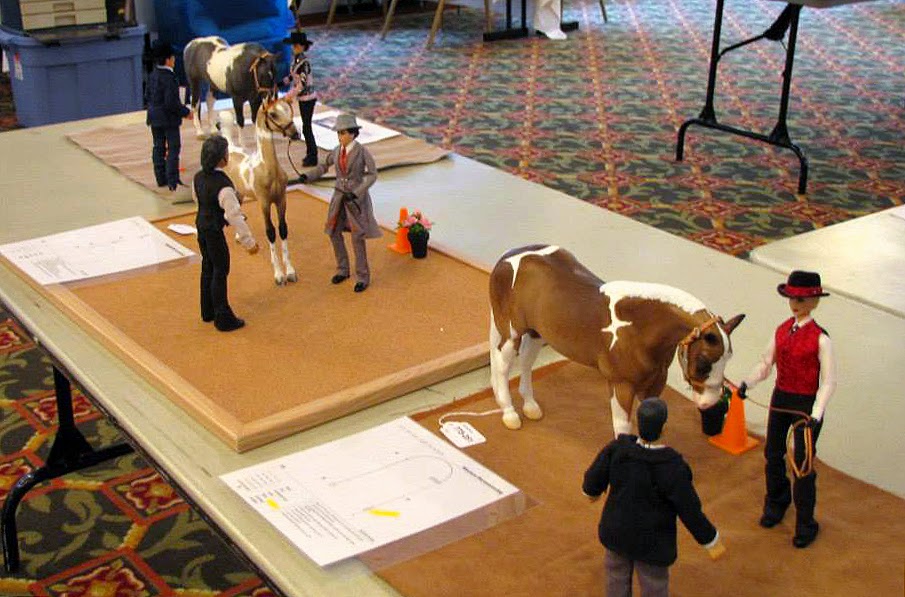 These photos were taken by Anne at the Albany Area Regional Performance show, which was held this past Saturday in East Greenbush, New York. 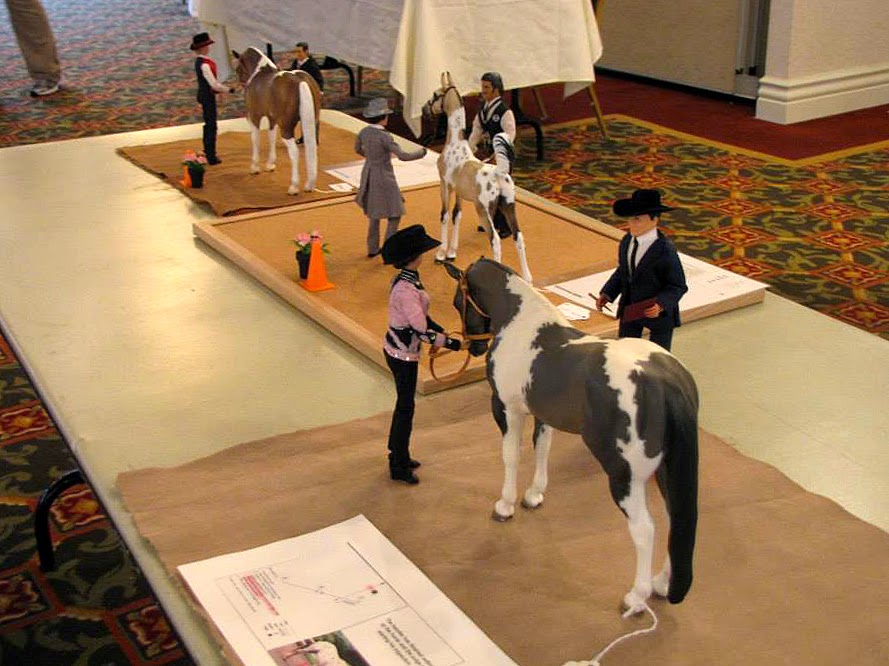 Anne is one of the hobby's best known doll-makers, but it turns out she's equally talented in the costume department.  I really like her show-ring style Arab costume, and it looks like the judge agrees! 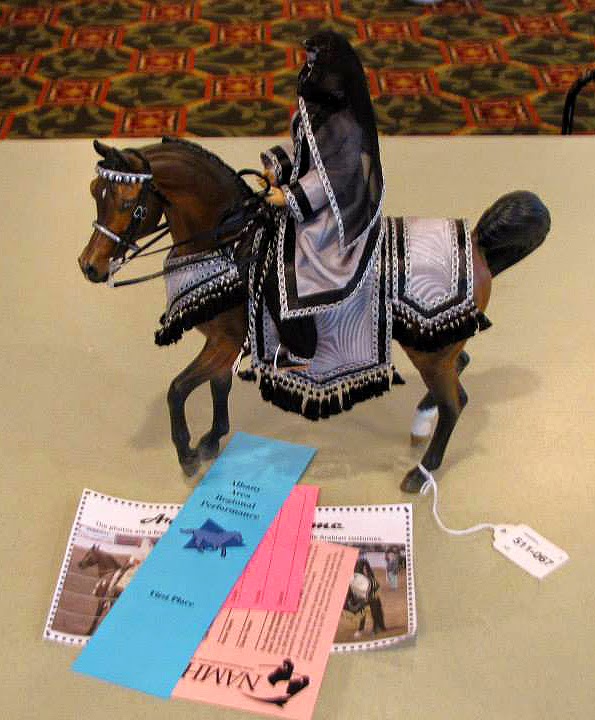 Proving that some people can make darn near anything, here's Anne's Bold Endeavor resin  with a whole bunch of stuff--dolls, food, even the picnic table--made by Anne.  All this entry needs is a donut eating dog, and it would be perfect. 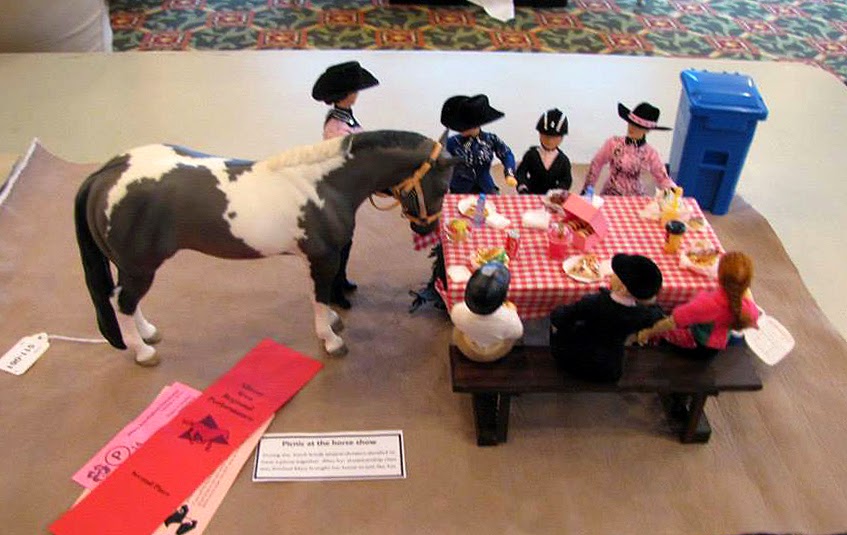 Fortunately for us tackmakers, Anne would rather trade for tack than make it herself.  The saddle and pack sets shown in this photo were made for Anne by my friend Sara Kucharski of PawPrints Saddlery. 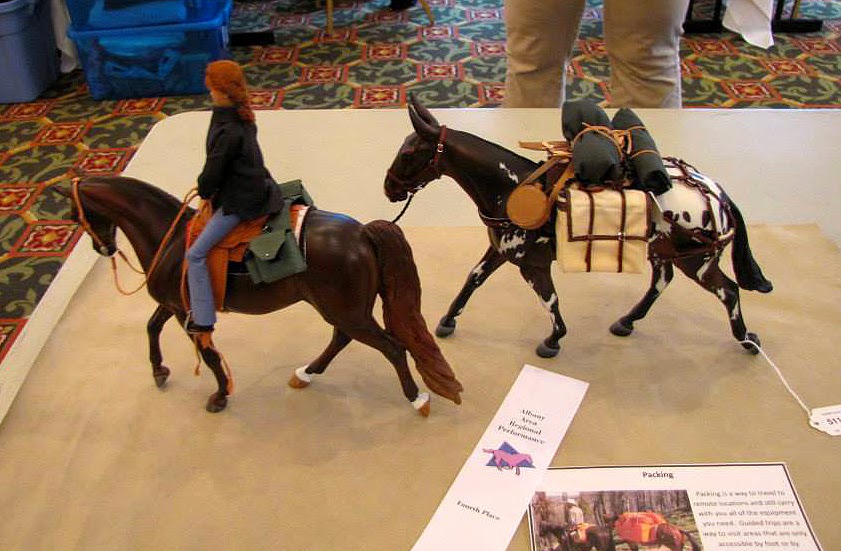 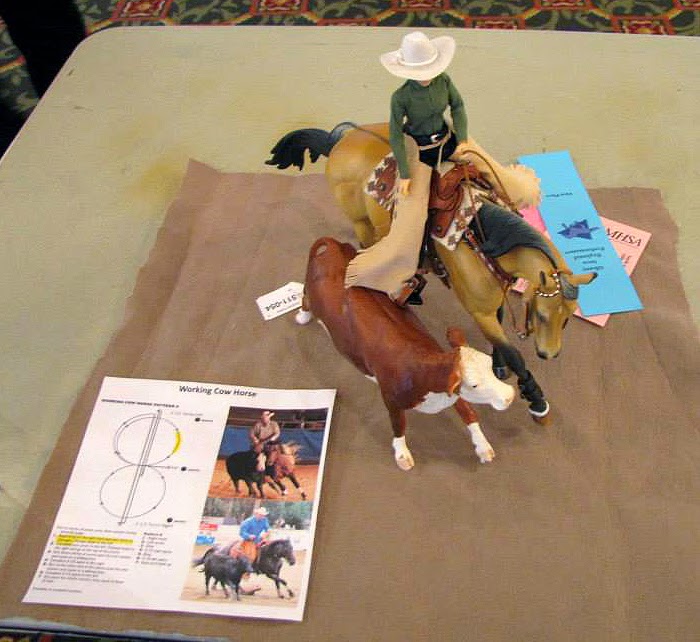 Anne showed several models in this division.  This one is Flash in the Sky, a Carol William Matriarch resin painted by another multi-talented doll-maker, Joan Yount.  She is shown with a barrel spin obstacle that includes several of my photos in the documentation. 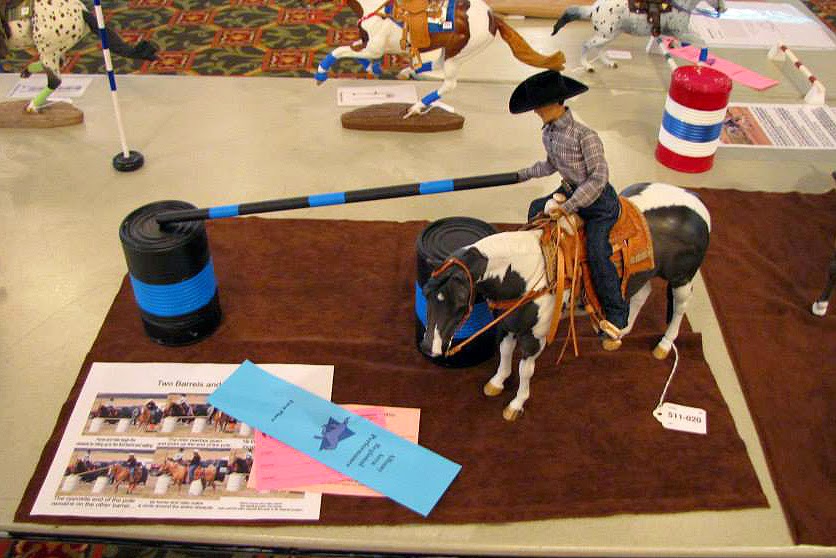 Here's another one of Anne's Western horses competing in a Versatility Challenge.  Mocha Latte is a Liesl Dalpe Loping Leggs resin painted by Liesl.  Her saddle was made by Pam Perkins and her bridle by Danielle Hart.  It goes without saying that Anne made the dolls.  The English saddle might be one of mine, but I'm not sure. 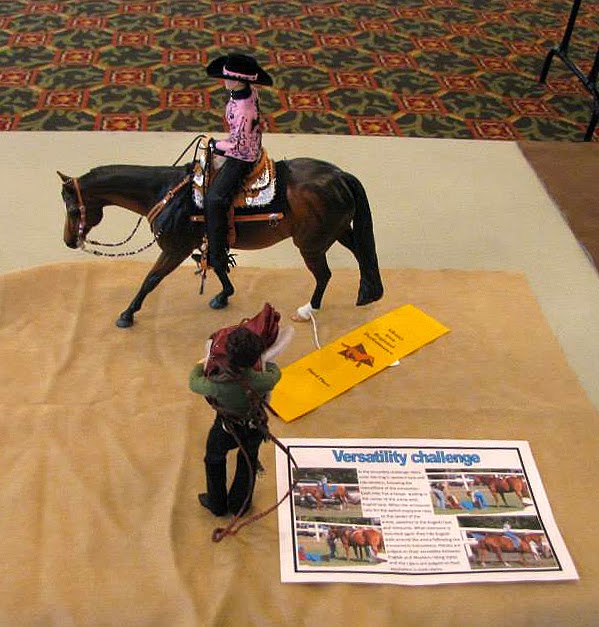 This is Flash in the Sky again.  Her doll was made specifically for this class! 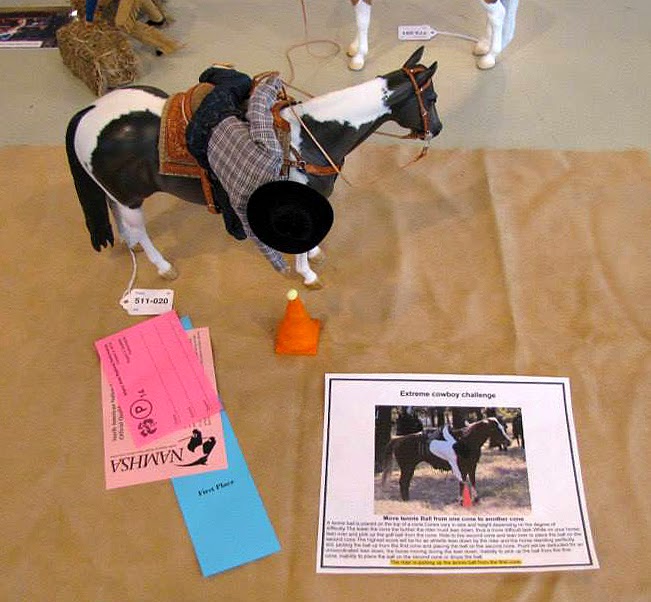 Flash in the Sky was division Champion.  Another one of Anne's models, Bootlegger, was Reserve.  Bootlegger is a Sarah Rose Reiner painted by Meghann Lorei. 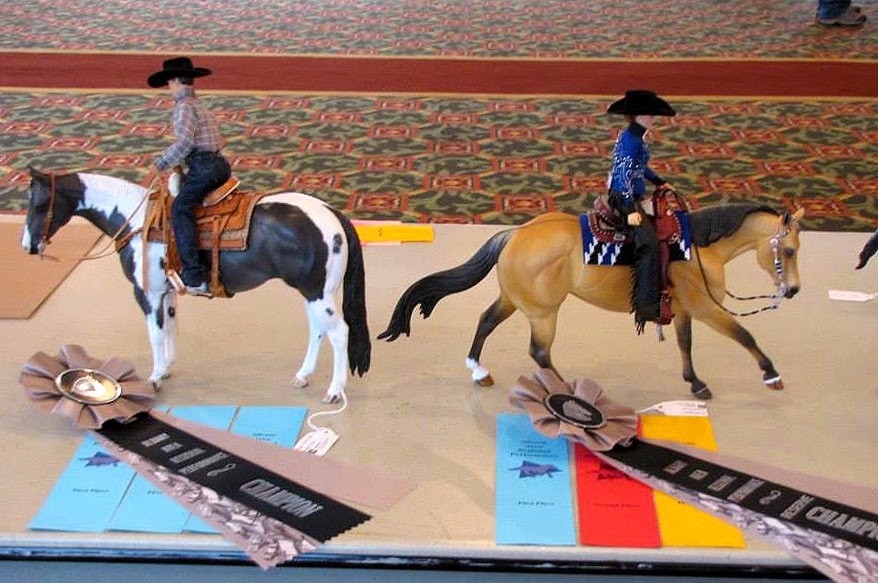 Finally--English!  These are the pictures I was tagged in. 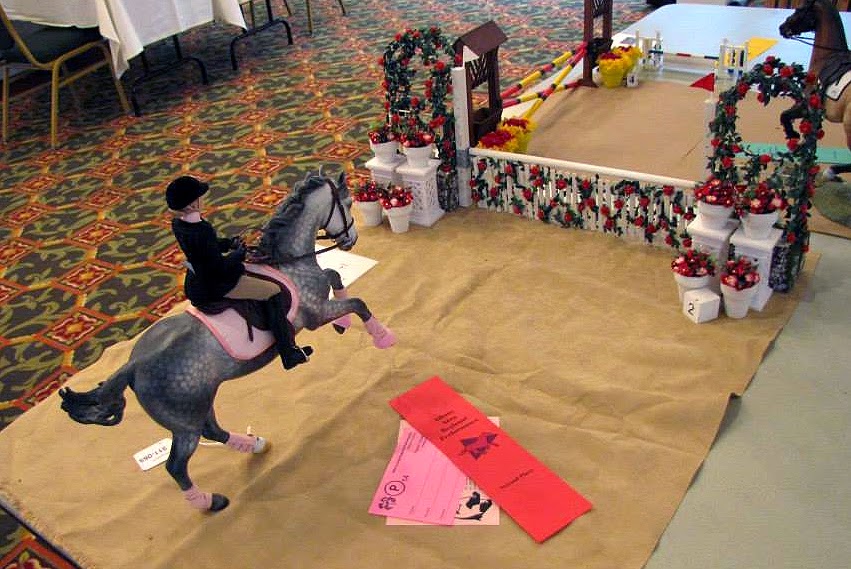 This nice grey horse was sculpted by Mindy Berg and painted by Joan Yount.  He is wearing a BCS saddle and bridle.  Anne made the doll, saddle pad and horse sports medicine boots. 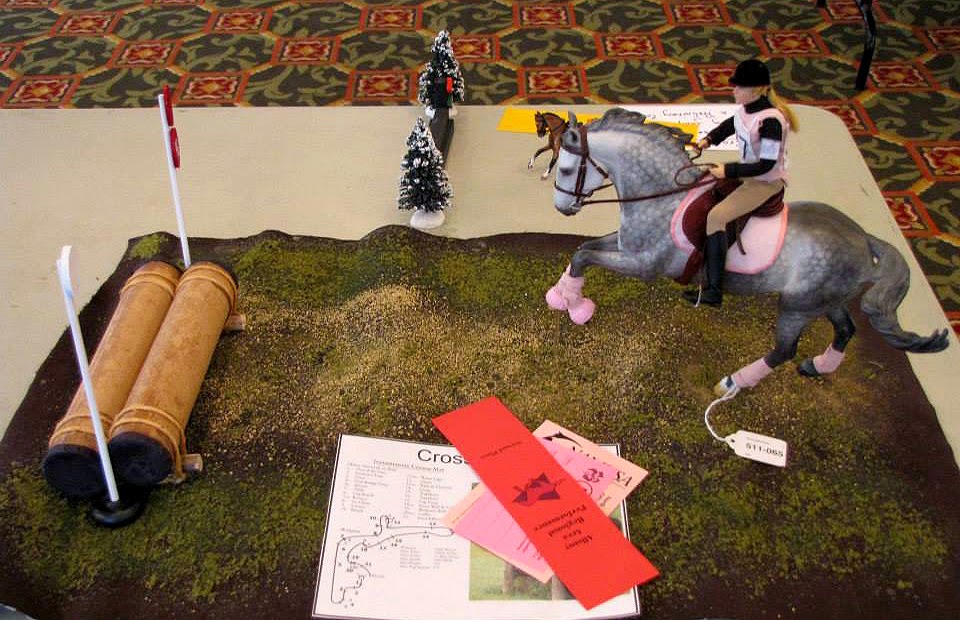 Anne also showed two other models in the English classes.  The walking Leggs wore tack by me... 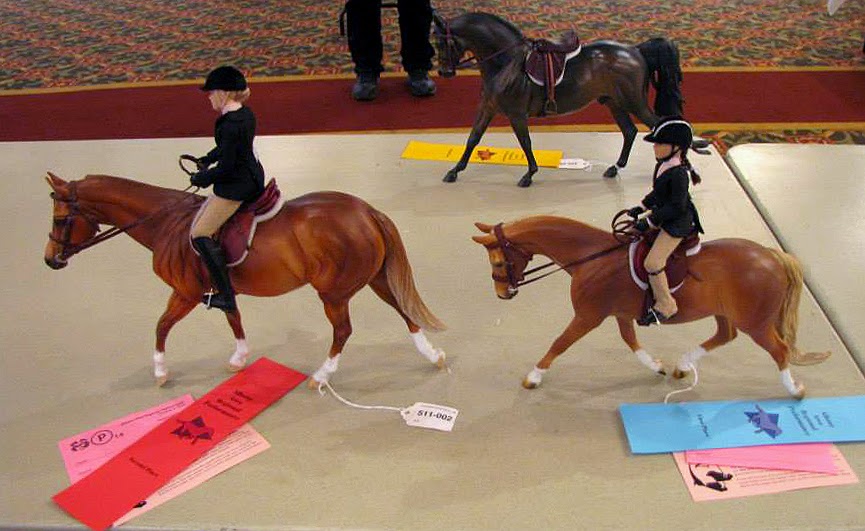 but this adorable pony named Halestorm was dressed in a saddle and bridle by Pat Coulter. 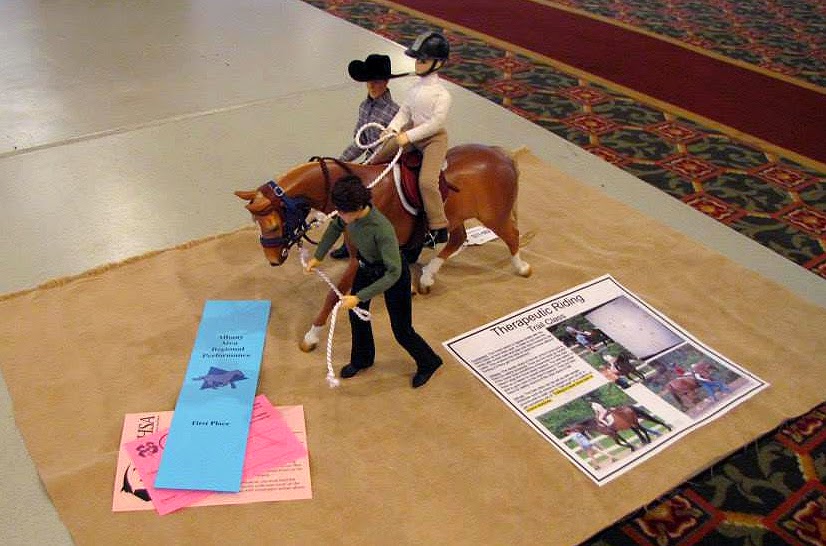 Here's another one of Halestorm's entries.  Performance newbies should pay attention to the documentation.  All of Anne's entries have really nice supporting materials with clear photos, diagrams where relevant and not an overwhelming amount of text. 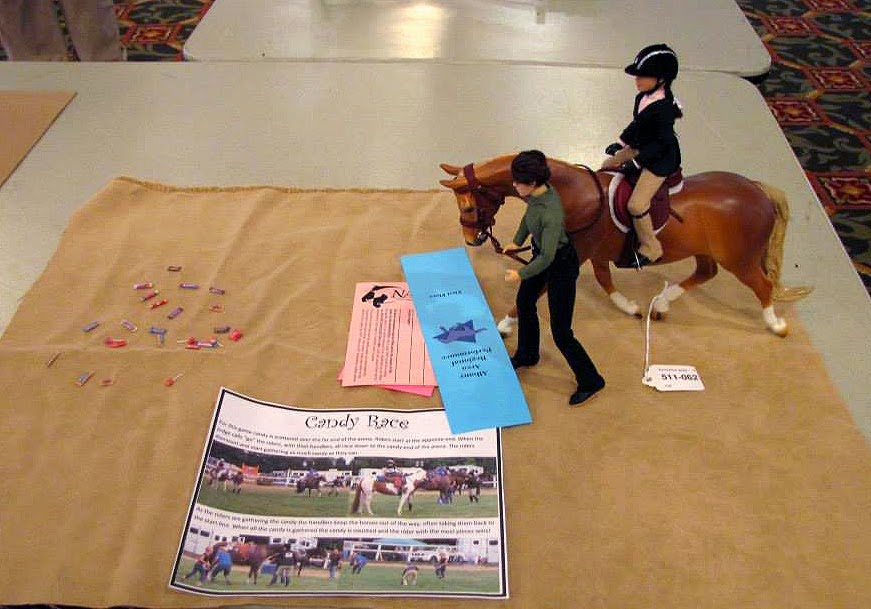 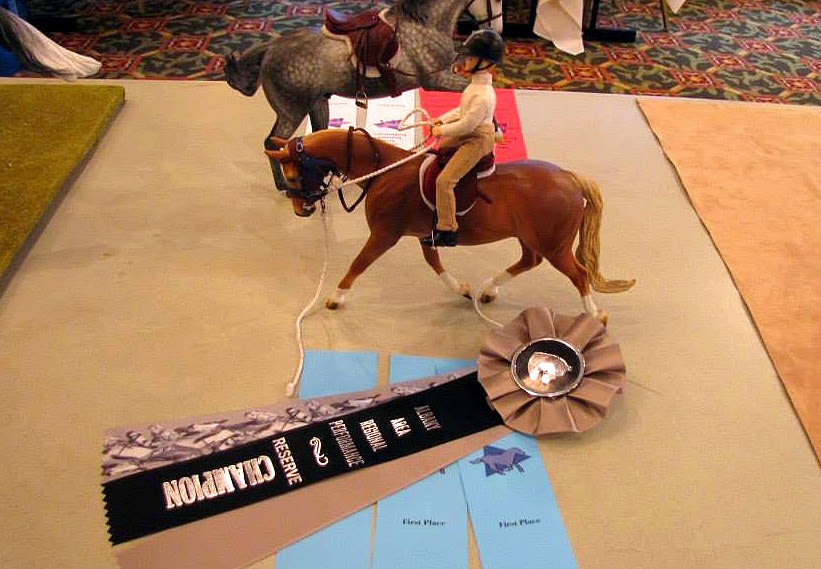 Congratulations on all your wins, Anne, and thank you so much for allowing me to share your pictures!
Posted by Braymere at 10:51 AM