You never know what you're going to get when you attend a performance show in Colorado.  Last year, when I judged the performance division at Springamathing, this was only entry in the harness class. 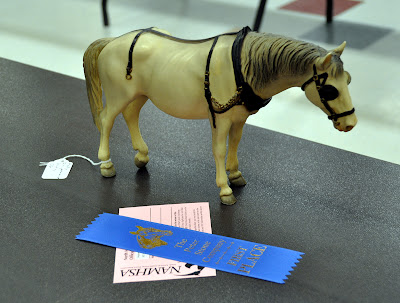 I judged again this year, and right from the start I knew it was going to be an entirely different experience.  This time the harness class had three entries and two of them were National Championship quality. 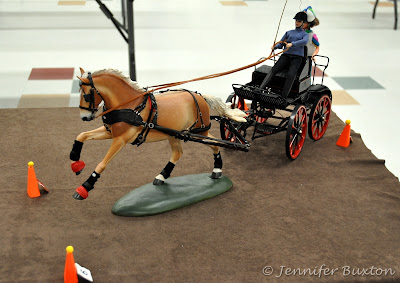 Top honors went to Jackie Arns-Rossi's lovely Hazel resin, Heidi, but really, that could have gone either way. 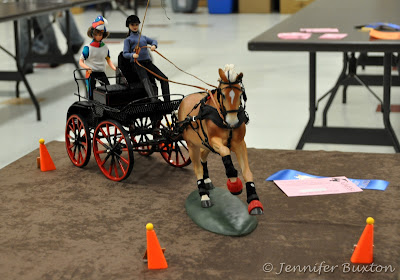 Native costume was next... 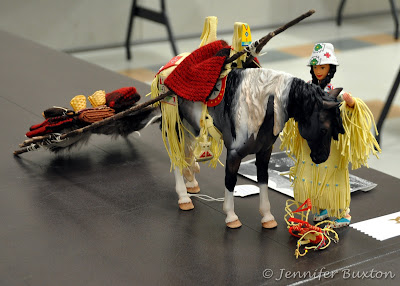 and this time there were five good entries on the table. 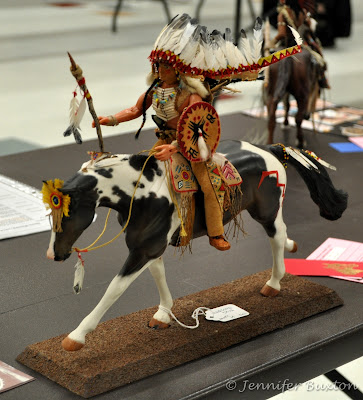 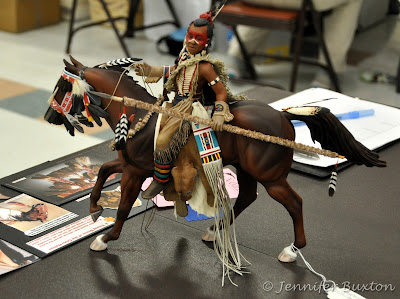 Other Costume/Parade was a bit easier for, but not much. 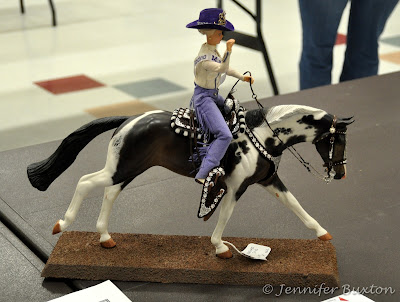 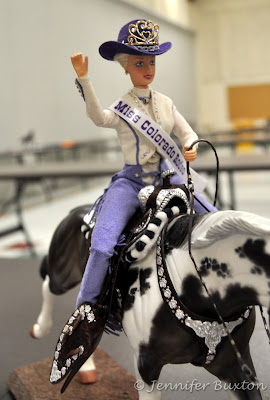 Because I was busy judging and showing, I didn't get pictures of all the classes.  One of the missed events was the Other Performance class.  If I remember correctly, that was also won by Lonesome Dove.   Don't quote me on that, however!

The last class of the Other Performance division was scene.  Lu and Sandy both put up outstanding entries, so I was forced to do something I've never done before... 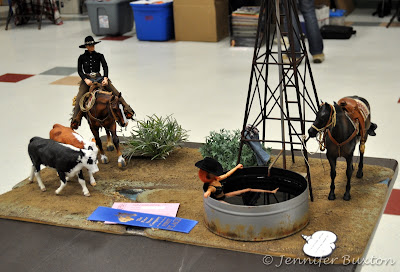 I gave them both blue ribbons! 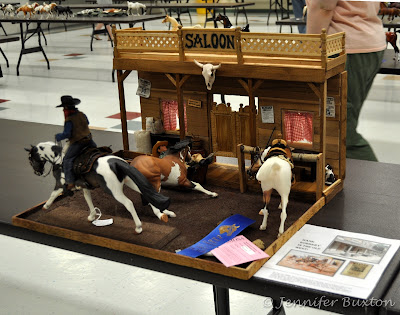 The English Performance division is my favorite, both as a shower and a judge.  Unfortunately, the English classes at this year's show came during the busiest part of my day.  Something had to give, and in this case it was the photos.  Even though there were a lot of great entries on the table, I just didn't have time to document them. 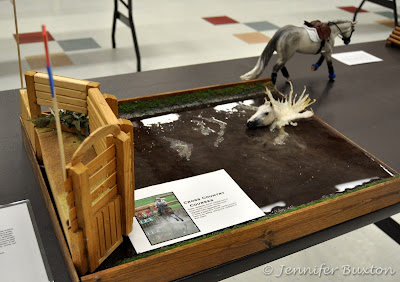 I did manage to get a couple shots of Beowulf splashing around in Sandy's water jump! 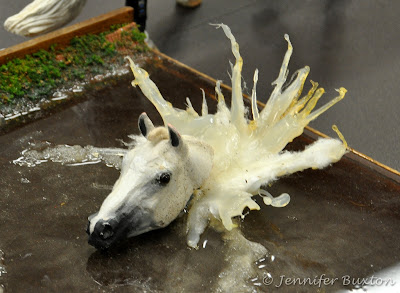 And here's Lonesome Dove winning the Other English class. 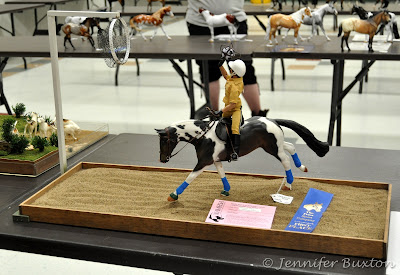 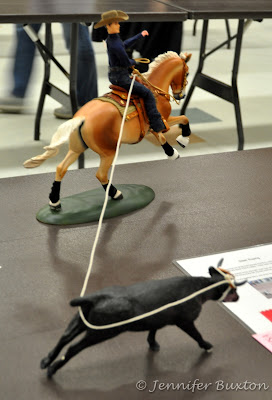 Yet another blue for Lonesome Dove! 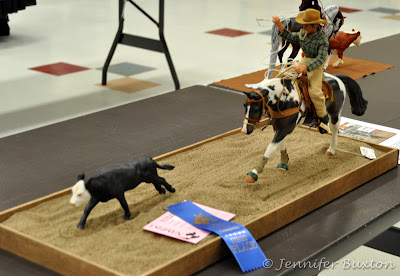 Lu's Cowcutta resin was the clear winner in Cutting. 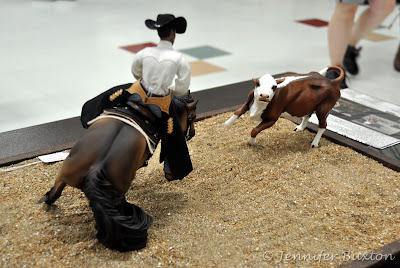 It's hard to capture in photos, but this is the best cutting posed rider doll I've ever seen. 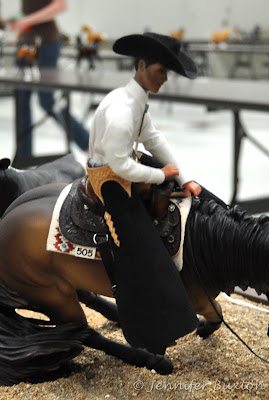 Other Stock/Ranch Work was next, and once again Lu was triumphant. 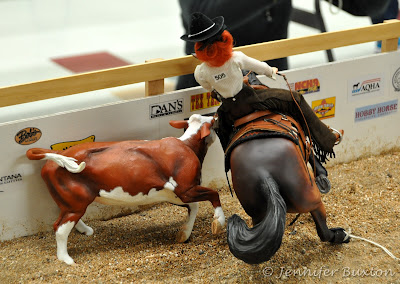 My favorite entry, however, was Teresa's BHR Loping Horse, Invitation to Unzip. 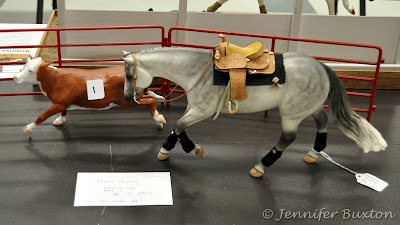 Teresa never shows in the cattle classes, so I was so glad to see her stepping outside her comfort zone.  Still, I think her description card needs some work... 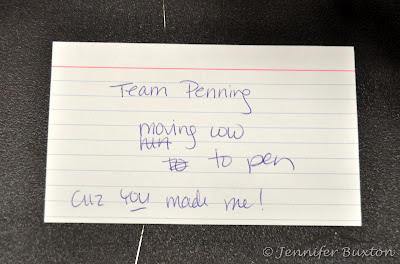 Reining was won by yet another Lu horse. 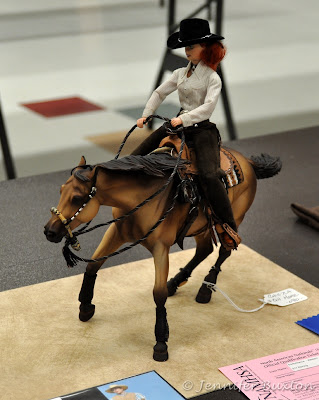 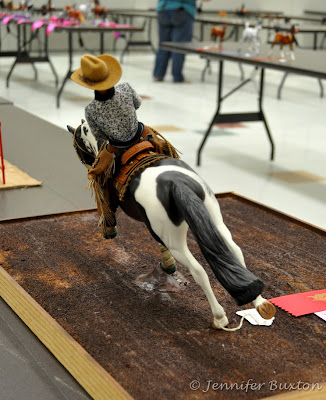 and Heidi galloped into third. 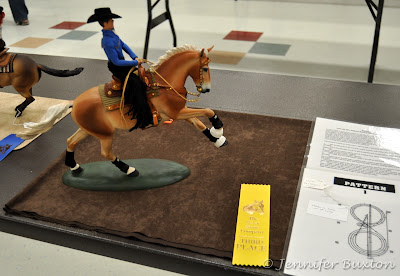 Fabian Rodriguez's Sade won both the Western Trail and Western Pleasure classes with her side saddle tack and rider. 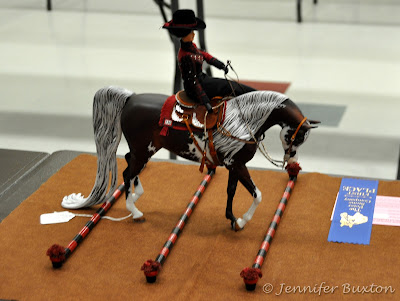 The division wrapped with the Other Western class and Western division champions.  Then--finally!--it was time to award the trophy models.  After a day filled with so many tough decisions, I was delighteded to discover that this last choice was an easy one.  With two division champs (Other Performance and Western Performance) and too many ribbons to count, Sandy Lyles' Lonesome Dove was the clear choice for Overall Champion. 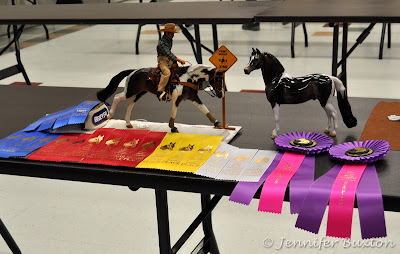 Right behind her was Jackie Arns-Rossi's, Heidi with her English Performance Championship and Other Performance Reserve. 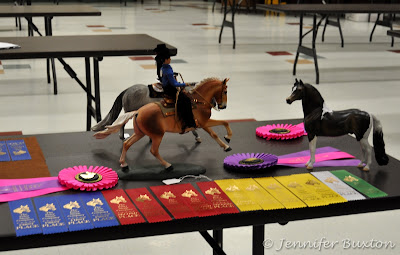 Congratulations to everyone who showed in the Open Performance Division at Springamathing 2013.  That was, without a doubt, the best Colorado performance division I've ever had the pleasure of judging!
Posted by Braymere at 12:51 PM