Model horses are versatile critters.  It's not unusual for a good performance horse to compete in any number of diverse disciplines in a single day.  Pleasure driving, costume, endurance, jumping, gymkhana games, calf roping and Western pleasure?  No problem!
This is not generally the case with real horses.  Oh, there are some horses that compete in different events, of course, but generally those events are not totally unrelated.
Don't tell that to the folks at Cottonwood Riding Club in Littleton, Colorado, though!  This large boarding stable hosted a fun Pentathlon this weekend that was an absolute celebration of equine--and human!--versatility. 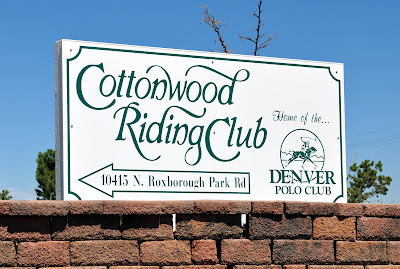 The Pentathlon was a team event with each team being composed of six riders.  My friend Jane's daughter Marianne and her horse Twist were a part of the "Lucky Charms" team.  That's them second from the right dressed up as the purple horseshoe charm. 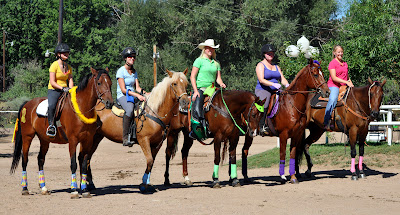 As is usually the case with fun type events, turnout was casual and often sparkly. 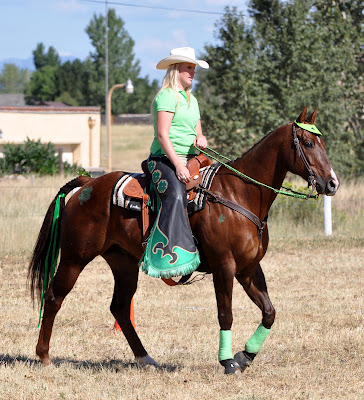 This drafty guy was part of the "Dances with Hooves" team. 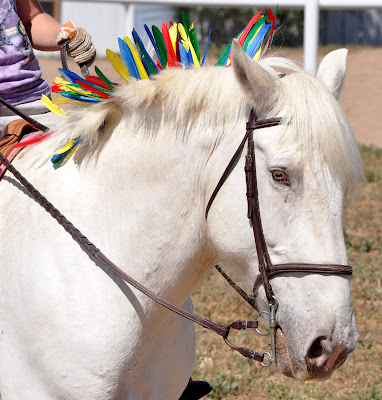 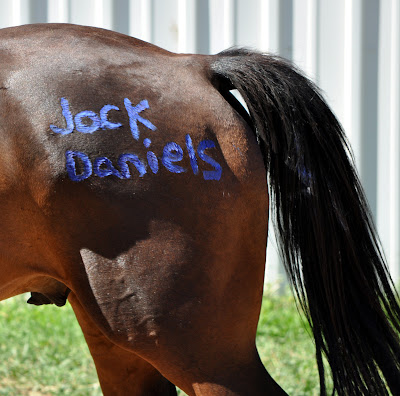 as was hoof glitter! 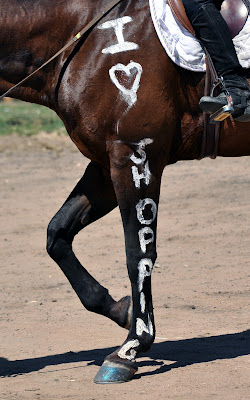 The five events were Trail, Dressage, Barrel Racing, Polo and Jumping.  The Trail class took place in a large field... 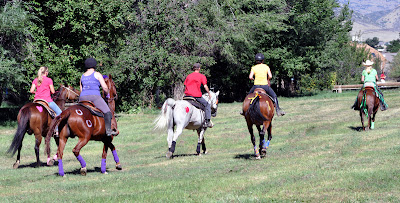 and included obstacles such as walk throughs (with swimming pool noodles!), 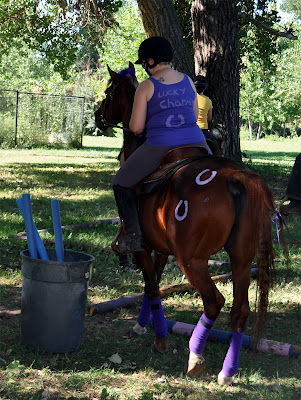 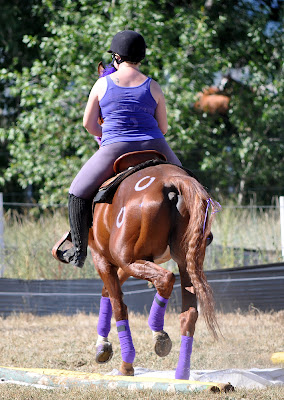 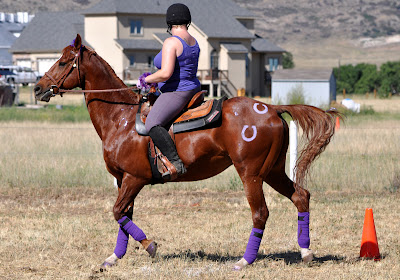 The Dressage competition was really more of a drill team event as all the members of the team were in the arena at the same time.  Unfortunately that arena was inside a poorly lit indoor ring, so this is the only picture I took! 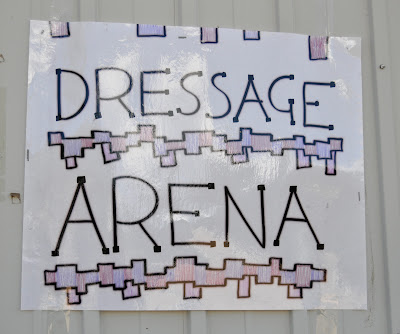 Barrel Racing was next.  Some team members were very accomplished at this event. 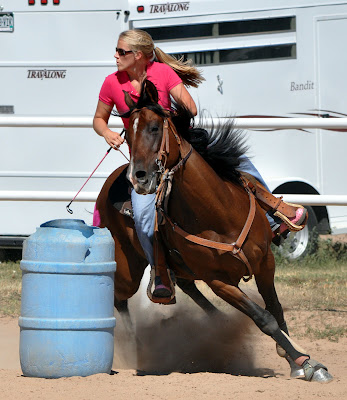 Others struggled a bit. 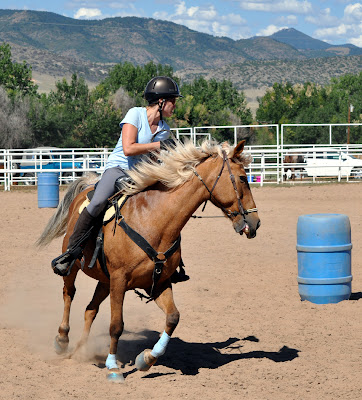 It was especially fun seeing some English horses put in some good runs. 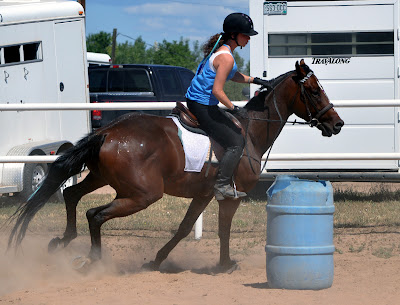 Cottonwood Riding Club is the home of the Denver Polo Club and the facility features a dedicated Polo arena. 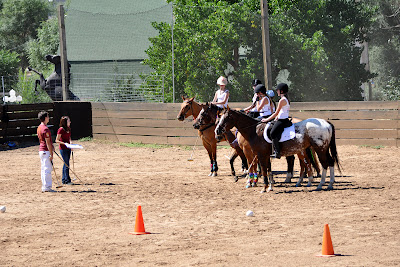 The Pentathlon's Polo competition was a basic, two shot affair that I will explain in greater detail tomorrow. 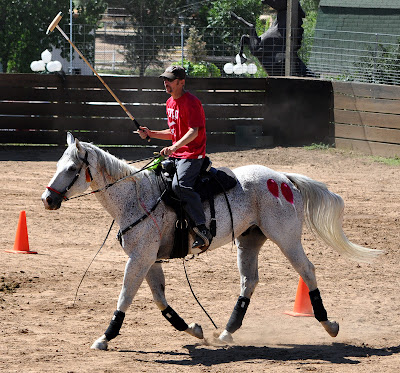 The last event of the day was a Gambler's Choice jumping class.  Jump heights ranged almost nothing to four feet six inches.  Some of the Western riders swapped out their Western saddles for English... 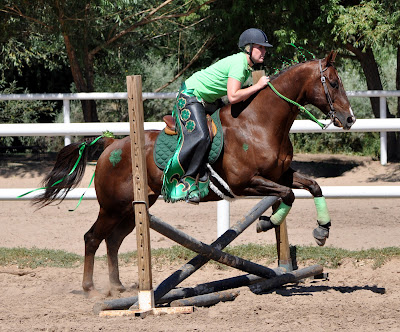 but others did the best they could with what they had. 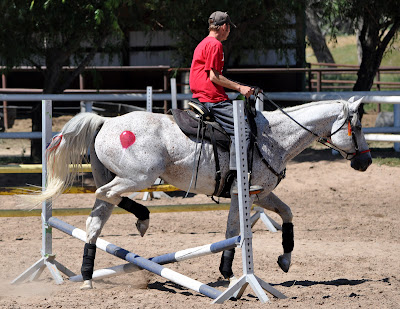 Here's one of the little tiny "jumps." 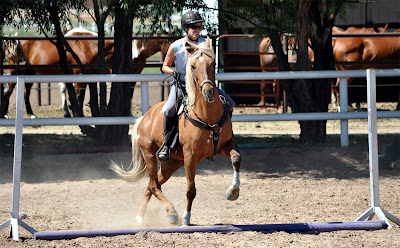 Marianne and Twist were the stars in this leg of the competition performing a nice smooth round that included most of the medium sized fences. 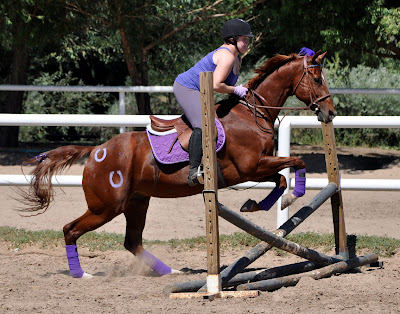 Post performance pats for Twist.  He and Marianne did a wonderful job proving that occasionally real horses can be just as versatile as their plastic counterparts. 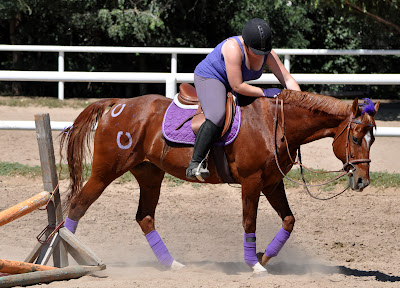 Thanks so much for inviting me to the Pentathlon, Jane.  I had a great time.
Posted by Braymere at 7:33 PM