Horse statues at the US Cavalry Museum

Instead of going to jury duty and posting pictures from the GLC No Frills live show, today I'm running errands and finishing up my photo tour of the U.S. Cavalry Museum in Fort Riley, Kansas.  Specifically, I'm focusing on the two large statues outside the museum itself. 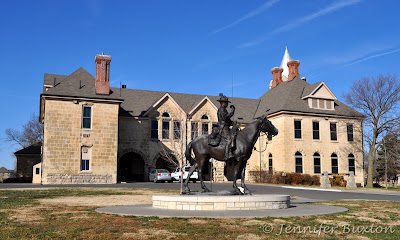 The first is called "Duty" and it was sculpted by James Nathan Muir.  It is described as "a tribute to the Cavalrymen and their Horses who so faithfully served our Nation." 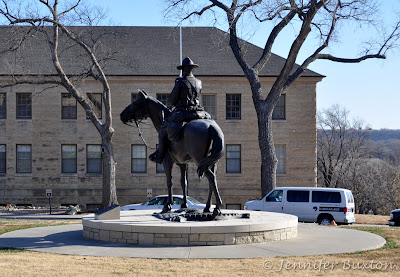 As always, my eye (and camera) lens are attracted to the tack.  The details on this bridle are wonderful! 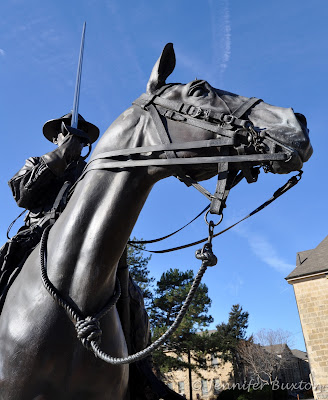 Although my overall experience of the Cavalry Museum was extremely positive, I did wish there was a bit more information presented about the horses.  Perhaps I missed it, but I did not see a single display that was dedicated solely to the horses of the United States Cavalry. 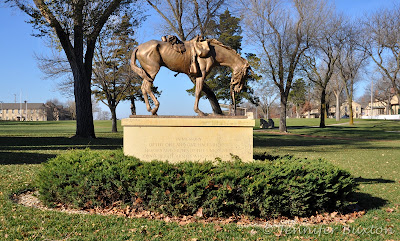 Fortunately, what's missing inside is addressed outside.  The inscription on the base of this statue reads:  In memory of the one and one half million horses and mules of the Union and Confederate armies who were killed, were wounded, or died from disease in the Civil War. 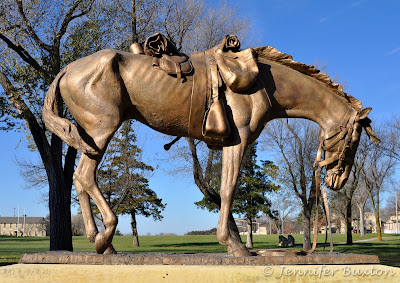 It's a lovely tribute and a good reminder of the horse's place in the history of our country.  The U.S. Cavalry is on my short list of favorite museums.  Be sure to stop in the next time you find yourself travelling through Kansas!
Posted by Braymere at 10:21 AM