Summer vacation is almost over.

In just a couple days, the kids will be back in school and I will be back in the studio.  Although it's been a good summer, I'm ready for the change.  I look forward to having a regular schedule, especially a schedule that includes long, uninterrupted stretches spent making tack.

Until then, I'm staying busy wrapping up two of my summer customizing projects. 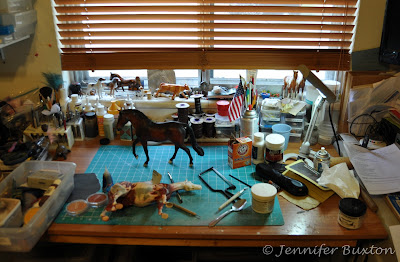 I've shared bits and pieces of the first horse several times over the course of the last month but this is the first time s/he's appeared in his/her entirety. 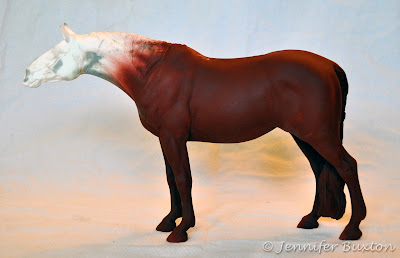 This is a waste mold casting of an original sculpture by Jennifer Scott.  I've been doing the prep work, which is something I enjoy.  Additionally, Jenn has allowed me to fix some of the areas that needed fixing.  There's still some work left to go, but I look forward to giving him/her back to Jenn sometime next week. 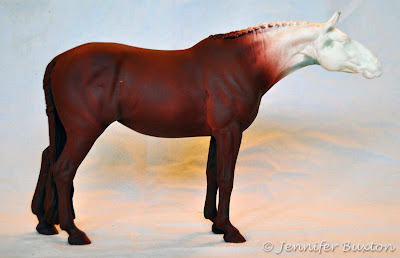 The other project is a horse with a history.  About three years ago I spotted this lovely customized Eberl Lorenz for sale on MH$P.  I don't buy many finished resins, but this one really appealed to me.  I couldn't stop thinking about him, and eventually I arranged to make him my own. 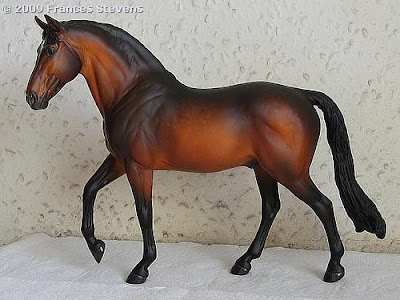 And then...  my husband got laid off.  He was still out of work when the horse arrived so my usual new pony euphoria was replaced with feelings of guilt and remorse.  I could hardly stand to look at the model, and he ended up being placed a little too close to the edge of my work desk.  It's a sturdy desk so normally that would have been ok.  However, that was truly a Murphy's Law kind of month for the Buxton family.  Everything that could go wrong did and my horse ended up crashing to the ground.

Surprisingly, he didn't lose body parts.  However, two legs and an ear suffered multiple cracks and there was a lot of paint damage.  I'm good at fixing things, but I have my limits.  Plus, I really didn't want to look at this horse any more.  He had too much bad karma, so I hid him in the back of a shelf in the basement.

I discovered him there earlier this summer and decided I was ready--finally!--to restore the old boy to his previous glory.  I dug out and filled the cracks... 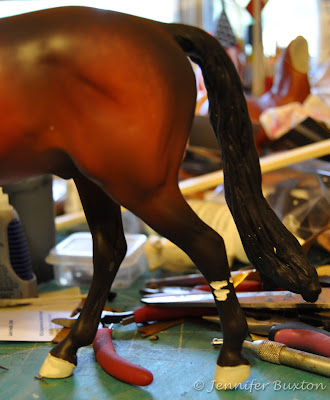 and have successfully restored the finishwork.  All that's left is the hooves.  I plan to work on those today and tomorrow using Kimberley Smith's tutorial. 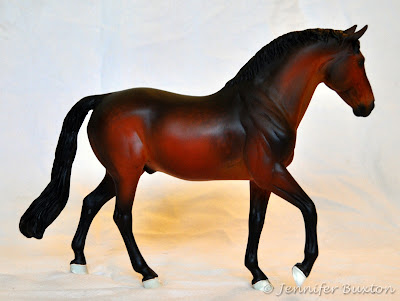 Barring any last minute complications, my work on both these horses should be complete before the official end of summer vacation.

Progress pictures tomorrow!
Posted by Braymere at 11:42 AM