Sophie writes: I would love to know how you create that raised nose or browband effect,it really fascinates me how tackmakers make them so realistic, if that's possible :) This is another wonderful topic suggestion--thank you Sophie! There are several different ways to make raised browbands and nosebands in miniature. I know I've tried two or three different methods over the years. Predictably, the one I like best is the one that most closely matches the way real raised browbands and nosebands are made.

Not sure how a real noseband is made? Sometimes the best way to figure things out is to take something apart. Luckily, I happen to have an old broken noseband at my disposal. This was part of my very first bridle, and despite the fact that it's no longer usable, I've been reluctant to throw it away. It's been lurking at the bottom of a bucket for the last couple years. 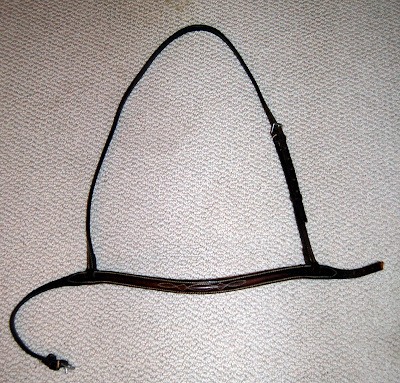 Close up of the center section of the noseband. This particular noseband has fancy decorative stitching on the middle of the raised portion. I've seen a few enterprising tack makers mimic this effect with paint. I've never tried that myself, mostly because I don't think I could do a good job of it.

Here's a look at the backside of the noseband. You can clearly see that the raised section of the noseband has a second piece of leather sewn to its backside. 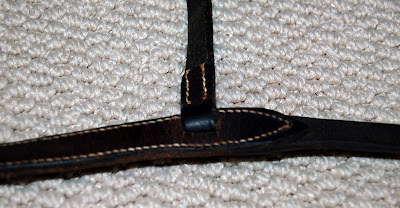 In this picture I have started to pick apart the stitches that are holding the two layers together.

I've got the layers separated now and the plastic cord that gives the noseband its rounded shape is clearly visible.

The bottom layer of leather is flat. The top layer is thinner and has been shaped around the cord.

So that's the real thing. Tomorrow I'll focus on its model sized counterpart.
Posted by Braymere at 12:38 PM