I didn't take very many pictures of the Western Performance division at High Country Live. This should in no way be interpreted as a reflection on the quality of the competition. Although none of the classes were huge, they were some very nice entries. I particularly wish I had taken more photos of Lu Heater's setups. She absolutely owned this division with one knock out entry after another. I would have been so much better off if I had taken things a bit easier and not shown so many horses.

But that's twenty-twenty hindsight talking. Three models seemed like a good idea at the time, and although it wasn't very pretty, I did manage to get all three of them in nearly every class. Here's a quick look at my Western boys. First up is my trusty Linda Lima Mule, Balthazar. He is showing in the Games class and was supposed to have boots on his front legs. Somehow they were forgotten. I'm pretty sure he went in the Roping class like this as well. 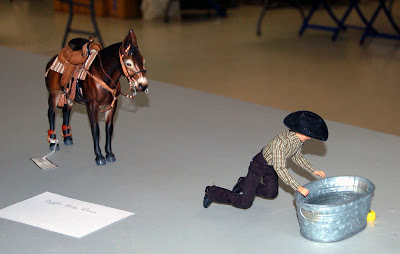 This is Hot Summer Knight, a Carol Williams Knightly Cadence resin painted by Sommer Prosser. He is showing in the Games Class doing Ride-A-Buck. His doll was dressed by Darla Curtis and his bridle was made by Erin Corbett. 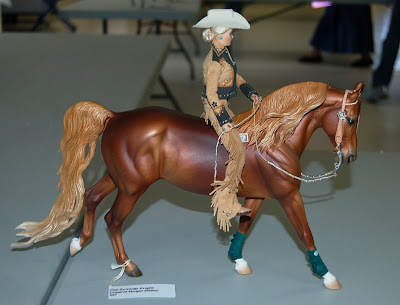 Last but not least is Letter to Laredo, a Sarah Rose Lone Star painted by Liesl Dalpe. Laredo's saddle is by Margaret Teller, his bridle is by Susan Bensema Young and his doll is by Traci Durrell-Khalife. Don't ask me where her hat is--I suspect it ran away with Balthazar's boots! 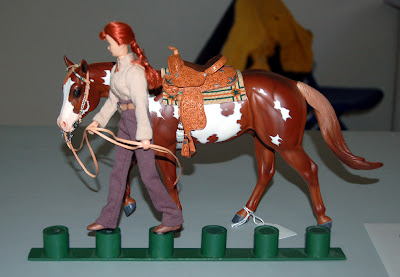 So now that you've seen my sort of half-assed Games entries, here's a look at the class winner. That's Lu's Stone Quarter Horse competing in the Hide Race. 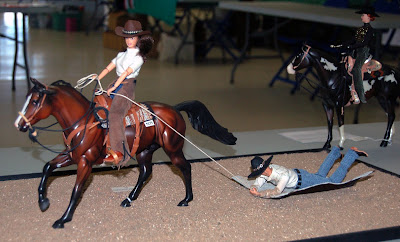 Close up of the doll on the hide. This was a really neat setup. Lu is a master at the small details that really make an entry come alive. I love the way the dirt has come up over the front of the hide! 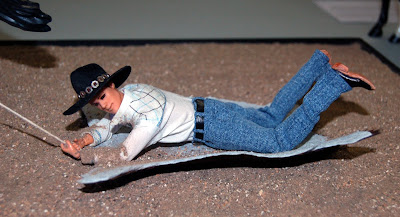 The only other Western class I photographed was Western Trail. Here's Balthazar again... 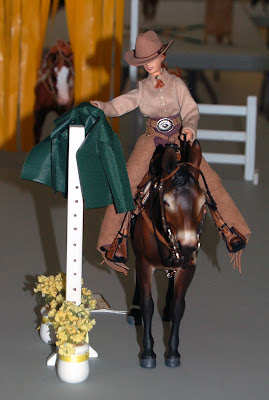 and Laredo. I made all of their props with the exception of the rain slicker. That was made by Traci Durrell-Khalife. 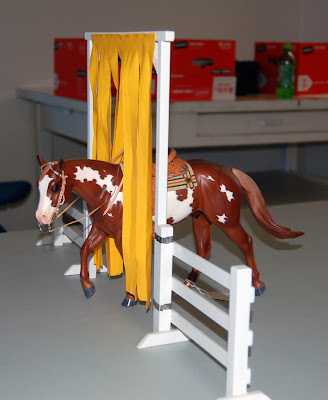 Lu's trail entry. This came with a LOT of really good documentation from one of the Texas Stock Horse Associations. Oh, to be that organized! 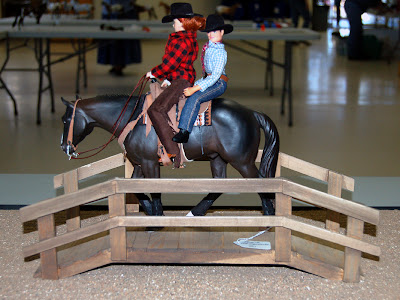 Not surprisingly, Lu's Monte resin ended up division champion. My own Balthazar managed to sneak into the reserve spot. Monte also went on to be the Overall Performance Reserve Champion. 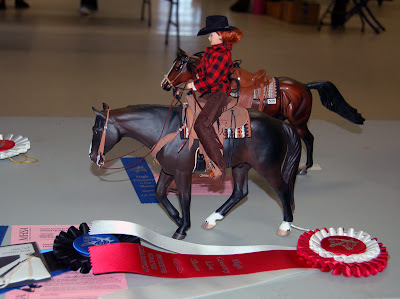 It was Adonis Z, however, who took home the Overall Performance Champion honors. Yay, Adonis! 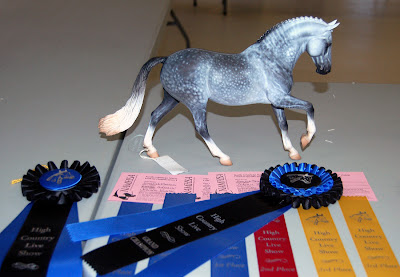 Next post--people pictures!
Posted by Braymere at 10:39 AM