Thanksgiving is early this year, and my week is chock full of family events.  I don't expect to have a lot of time for tack or blogging, so I'm extra grateful for this wonderful guest blogger piece by my friend, Christie Partee.  Thanks, Christie!

The first weekend of November has always been a big weekend for thoroughbred horse racing. But if you live in central Virginia, it’s not the Breeder’s Cup you are excited about; it’s the Montpelier Hunt Races! www.montpelierraces.org 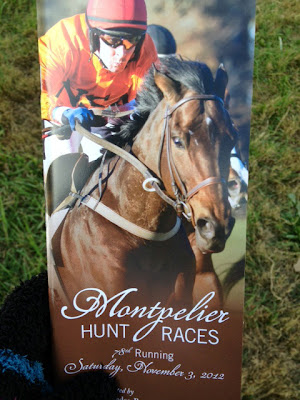 Montpelier was the estate of James Madison, the fourth President of the United States, in the countryside near Orange, Virginia.  After his death, the estate passed through many hands until it was purchased by the DuPont family, who converted a large portion of the grounds into a flat race and steeplechase track. In 1934, the first running of the Montpelier Hunt Races was held, and 2012 was the 78th running.  Since I happened to be in Virginia that weekend, my husband and I purchased tickets to go see what the Hunt Races were all about. 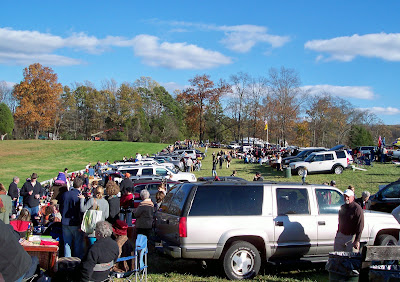 Parking for the hunt races is mostly in the infield, which has fancy tents for parties hosted by the sponsors and VIPs, and tailgate spots for the rest of us. Some of the spectators even go all the way and bring a fancy tablecloth, china, floral centerpieces, etc. (We just used the back cargo area of our SUV.) There was even a competition for the “best tailgate setup,” but obviously Sean and I didn’t win. It’s pretty obvious that the Hunt Races are a “see and be seen” event for the central Virginia gentry, since many of the tailgaters were very involved in socializing and they hardly saw a horse the entire day! In addition to the horse races, there were also Jack Russell Terrier races, and stick horse races for the kids. The sponsor area in the center of the track had a really nice French saddlery shop, Irish horse clothing and boots, and several home furnishing and jewelry stores. Sean snapped a picture of me standing next to some of the lovely French saddles. As you can see from my attire, it was a chilly fall morning! The entire race course area is pretty big, and it’s a lot of walking! We did some exploring before the races started and the crowds were still light, but once everything got going, we stayed closer to our tailgate spot. 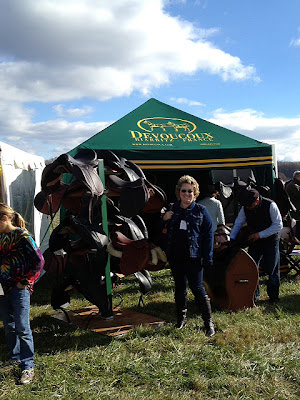 Steeplechase racing is fairly similar to flat racing, but with a few differences. Obviously, the jumps are the most obvious difference. There were two kinds of jumps: “National” fences, also known as “hurdles,” which were brush and about 4 feet high with a padded front, and the “Montpelier brush course” fences, which were about 5 feet high and had no padding on them. Most of the races were over the smaller fences, but one race was held over the higher fences, and one “training turf” race had no jumps. 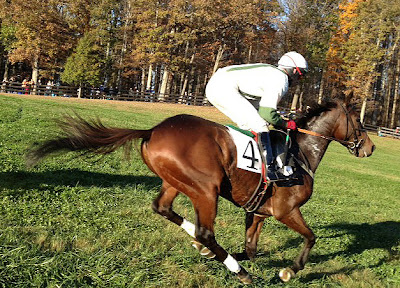 The race distances are also significantly longer than most flat races; Montpelier’s track is about a mile around, and all of the races were two laps of the track. The start is an old-fashioned standing start (no gate). The track is NOT level like a flat track! There are some pretty significant hills on the track in addition to the actual jumps. Also, there is no grandstand, and the only above-ground area is the tower where the officials watch the race. So, the spectators just line up at the rail and watch the horses go past. Unfortunately, this means unless you are a race official, you don’t get a panoramic view of the track. 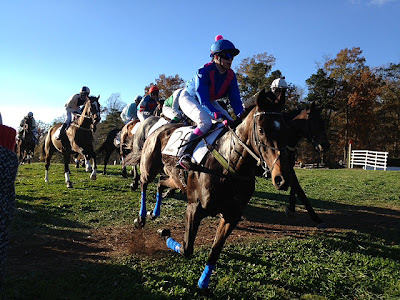 The horses used in Steeplechase racing are basically the same thoroughbred pedigrees you see on the flat tracks. I noticed a LOT of Dynaformer get, as well as a few AP Indy and Skip Away. (In a Facebook post that weekend, I complimented Three Chimneys Farm on the good performances of the Dynaformer sons, and they commented back that the Dynaformers are great jumpers!) The horses do tend to be older, as even a 4 year old is usually the youngest horse in the field, and they are almost all geldings. There are some that have pedigrees with horses better known for steeplechasing, but these were a distinct minority. 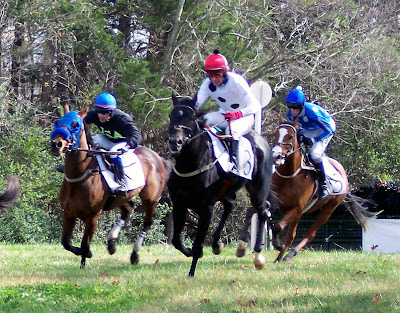 Steeplechase equipment is somewhat different. The saddles are mostly larger, often similar to a “work saddle” for flat racers. ALL of the runners used a web breastplate that was worn high on the neck. Bridles were standard English bridles with a few showing shadow rolls and flash nosebands. Irish martingales were also quite common since it is not unusual for the jockeys to fall off during the race! Leg wraps were also seen on many of the horses. Saddlecloths at this track were plain white rather than the colors that are seen in flat racing. The feature race, which was run over the bigger fences, had hunter green saddlecloths. 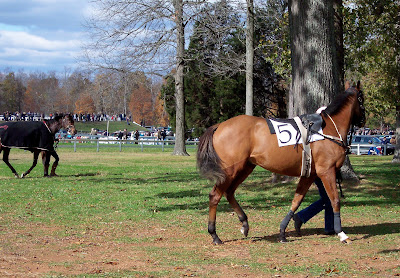 I took a few photos in the paddock before the first race. The horses are led over from the van area (Montpelier has no stables since it is a single-day event) already saddled, which kind of surprised me. The paddock has big trees where the horses are led around while they wait for the jockeys to mount. 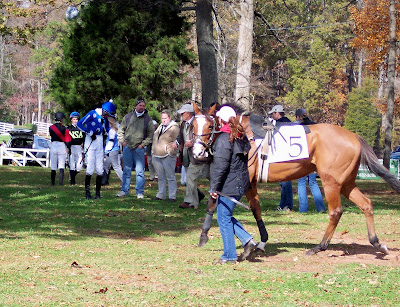 It’s pretty obvious from the photos that the steeplechase jockeys are a LOT bigger than flat race jockeys! They are almost normal-sized humans, just a little on the skinny side. Several jockeys’ bios were published in the program, and many of them are Irish. Even though they are running a lot further than flat racers, and jumping, the hunt horses carry a lot more weight. Most of the racers carried between 135 and 150 pounds! Jockeys still wear the owner’s silks, although some jockeys wore plain silks with “NSA” on it, which meant that the owner’s silks were unavailable. 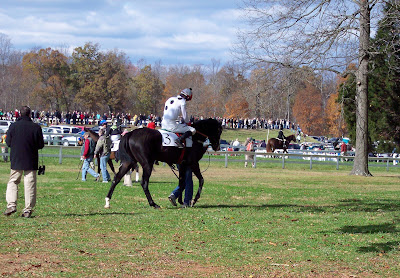 After the jockeys are mounted, the horses warm up like flat racers do, but there really isn’t a formal post parade, and there are no lead ponies. The horses canter around on the track for a while, and many of the jockeys take the horses over to one of the fences and let the horse have a good look at it. The photo of the beautiful dapple grey horse standing next to the big brush fence is from the feature race, and the horse is a son of the great turf racer Cozenne! 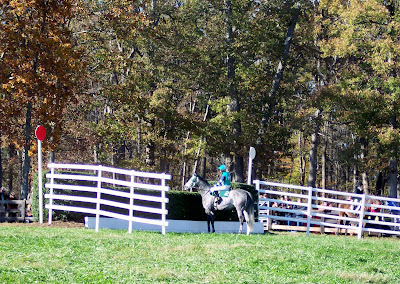 Each fence has a mounted outrider who stands on the outside of the fence and watches the horses go by. The riders who were stationed near the fences by us were members of a local hunt. Notice the photo of two of them. 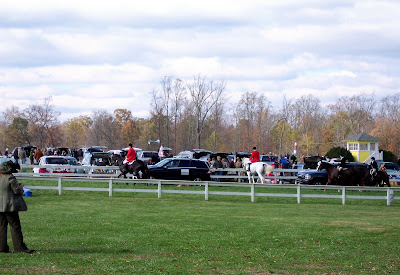 They both have the hunt’s colors in the vest under their coat and the coat buttons. I was really impressed to get to see this! 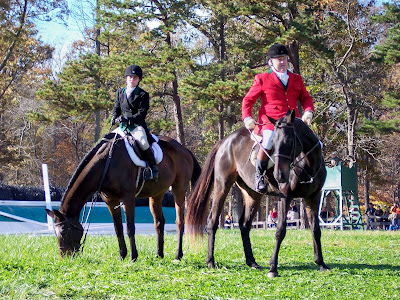 As I mentioned, the start of each race is an old-fashioned standing start. Unfortunately, I couldn’t get a good view of the start, or of the winner’s circle, due to the combination of the trees in the paddock, sponsor tents, and the fact that it was on top of a hill while our area was further down the hill. Still, I managed to get some great photos and a couple of videos, of the racers as they ran past our spot on the rail! 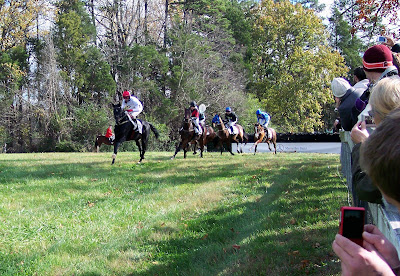 There was a p/a with the race calls, but it was a little difficult to hear, so we mostly just waited along the rail until we heard the hoofbeats come toward us. Suddenly, the horses were there, flying over the jumps at a dead run! The crowd cheered as they came by, and then they were over another fence and out of sight! During all of the races, I snapped pictures as they came by, and afterwards, I was amazed at how close I really was, and how fast they were going! 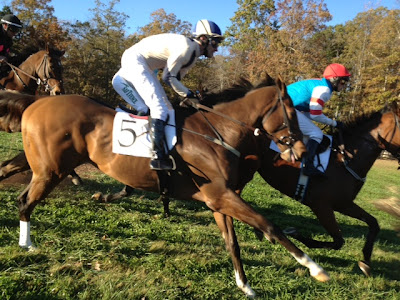 Sadly, once I figured out how everything worked, the day was over. There were only six races, including the final turf training race (no jumps), so by 6 PM, everyone was packing up their cars and heading home. It was a really memorable day, and I am so glad that I had the chance to see another unique horse sport!
Posted by Braymere at 12:55 PM