One of my favorite things about photo showing is that with the right camera angle and a lot of creativity, even the most unlikely models can be potential performance superstars.

Touch of Red is a perfect example of this. He is a Peter Stone rearing horse, a mold which is unpopular with halter and performance showers alike. Despite that, Touch of Red has had a long and successful showing career in the tough MEPSA show series. Here are a few of his pictures. 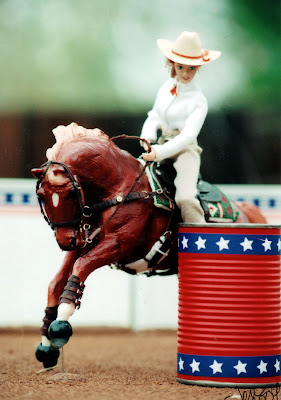 Touch of Red is shown wearing a Hartland Collectibles saddle made by Kathleen Bond. His cinch was made by Doreen McGuire, his pad by Deb Messner and the boots, bridle and breastcollar were made by yours truly. Traci Durrell-Khalife dressed the doll. 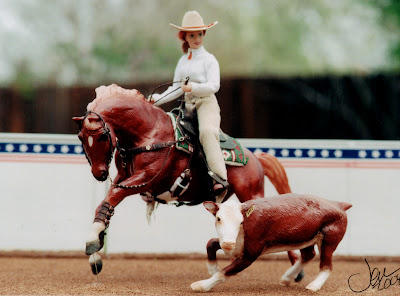 Competing in Western Trail with a jump by Jane Schneider. I love this picture! You won't see Touch of Red accompanying me to any live shows, but he's just as unlikely to end up for sale on MH$P. This good old boy with his good old pictures (taken with a film camera!) has earned his forever home. Who knows, I might even take some English performance pictures of him one of these years!
Posted by Braymere at 12:39 PM