Karen writes: This was the first time I set up a dressage entry so I was really nervous about how well I would get it put together and presented. I have your lovely dressage saddle, as well as a lovely double bridle and saddle pad that Corinne Ensor did for me in February. Because Corinne lives nearby and would be at MAR, she offered to double check how well I had tacked up my Salinero before I set the entry up on Sunday. I spent at least an hour getting the model tacked up on Saturday and felt pretty good about my efforts. Corinne took a look Sunday morning and, other than loosening the throat latch a notch, said I did fine. She also checked everything once I had the entry on the table and it was good to go.

Unfortunately, because I was judging at the same time, I can't even say how many entries there were in the class, but I believe it was quite a few. How thrilled was I when I looked up to that 1st place ribbon on my entry!!! 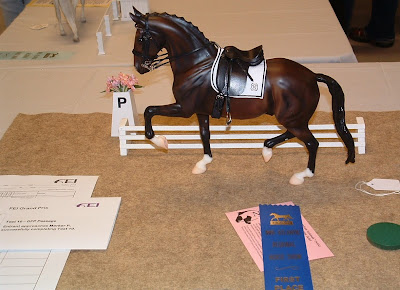 Additionally, Betsy had added a new twist to Performance this year by giving her performance judges "Best of Performance" rosettes for each division. All first place entries in a division were brought to the table at the time the division championship was being judged. The intention of the BOP rosette was to allow the judge to recognize their favorite entry in that division that might not qualify for the overall championship because it only showed in one class. So on top of that first place ribbon, Roshambo was also awarded the BOP rosette for the English division! 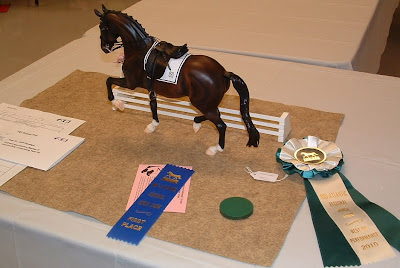 Congratulations, Karen, and thank you so much for sending the pictures and report. It looks like you and Roshambo will be more than ready for NAN this summer!
Posted by Braymere at 9:08 AM