Three ponies and a horse

If I was a better businesswoman I would work only for cash. Unfortunately--0r fortunately, depending on your point of view--that is not the case. I am easily tempted by all sorts of hobby goodies, and a large number of my tack orders are paid for in trade. I always seem to have a huge stash of unpainted models so I particularly like trading tack for paintwork. Today I'm showcasing some new models from old trades.

I customized these Naughty and Nice ponies more than two years ago. They started out as a battered pair of Breyer Classic Mustangs. They're not fancy customs, but I was quite pleased with the way they turned out. Of course it's hard to go wrong when you're starting with good Maureen Love sculptures! 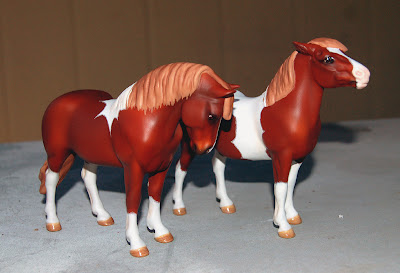 As much as I enjoy customizing, I'm not much of a painter. I sent the ponies off to Kirsten Wellman for "similar but not identical" paint jobs. Here's Nice after his makeover. He's a sweet and patient boy. 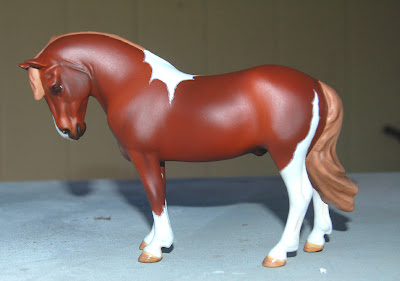 And this is Naughty living up to her name. I have to admit that this bratty girl is my favorite--I love that bad pony attitude! 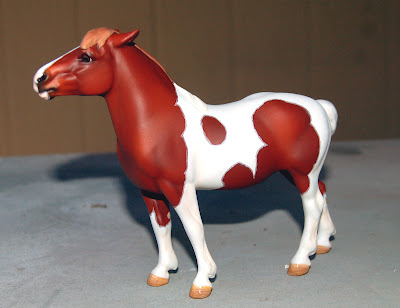 Continuing with the pony theme, here is an old resin with a brand new look. I bought this poor little Firefly for just $30 and that was mostly because I felt sorry for her. She had a terrible paint job which turned out to be two terrible paint jobs one on top of the other. I stripped her, did a little rescupting and sent her on to Meredith McFadden. I am so pleased with the results. She's actually cute now! 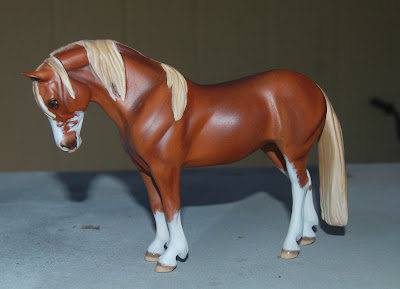 Last but not least, this is "Sanjay". He used to be a Breyer Lonesome Glory and is the product of four separate hobby artists--Kitty Cantrell sculpted the original model, Jeanette Garey and I are responsible for the customizing and Meredith McFadden gave him this nice tobiano paint job. I especially like his blue eye! 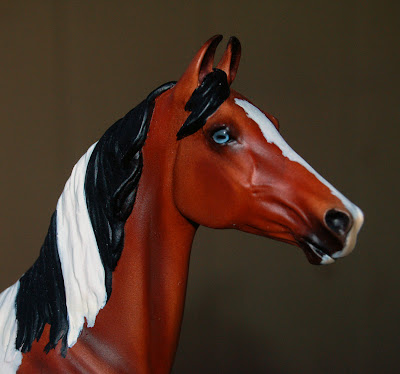 Thanks again to Kirsten and Meredith. I hope they like their tack as much as I've already like my old/new models!
Posted by Braymere at 1:40 PM