I think most hobbyists--or at least most hobbyists with an interest in performance showing--know the basic differences between hunters and jumpers. Hunters are judged on their jumping style, way of going and manners. Their jumps are "natural" in appearance and never top four feet in height. Jumpers are scored rather than judged. They (usually) wear more tack and compete over flagged and numbered fences that feature striped poles and colorful standards. The most common format for a jumper class involves two jumping rounds. The horses that finish the first course without jumping faults and within the time allowed proceed to a jump off. At this point it becomes a foot race. The horse with the fewest faults and the fastest time wins. Pretty simple, right?

Well, not always. I see a lot of "almost right" entries in the model jumper ring. The basic idea is there, but the little details--those things that really sell the set up--are just a bit off. Often the jump is much too big. Anything is possible I suppose, but I'd rather not see your Arabian galloping down to an Olympic sized oxer. There are lots and lots of jumper divisions to choose from and most models are going to look better doing something other than Grand Prix.

Another common problem is using a horse that is not really in a jumper frame. Jumpers may gallop fast--particularly in the jump off--but they also need to collect and turn. Horses in a really long, low frame aren't going to look right. The Breyer show jumper (Ideal) is nearly perfect. Smarty Jones and Cigar are not.

Here are some pictures of a pinto pony competing successfully in the jump off of a Children's/Amateur jumping class at the High Prairie Spring Preview II Show last week. Note the size of the fences in proportion to the pony (I would guess he was somewhere between 14 and 15 hands) and the frame he's travelling in. He's definitely moving forward with speed, but he's not full out. His head is up and both he and his rider are focused on the upcoming jumps. 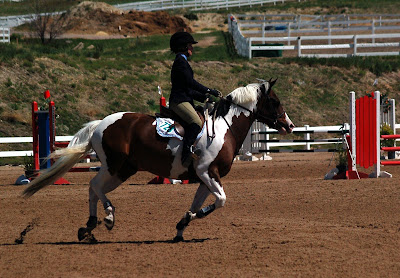 The pony looks unhappy here, but it was only a momentary issue. 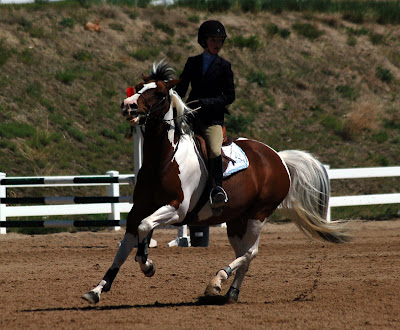 Turning in midair to save time. 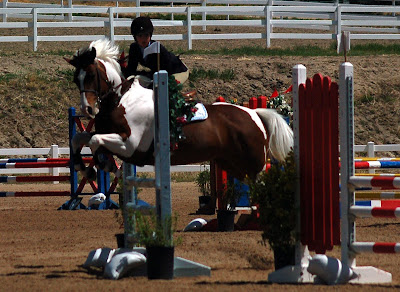 They landed long and strung out and overshot their turn. The rider compensated by sitting down and pulling hard to the left. 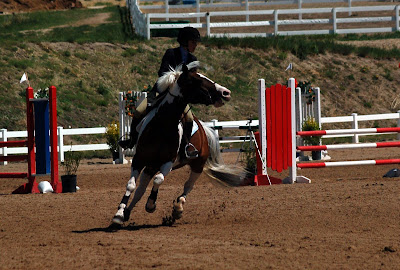 This got the pony turned around but also resulted in a loss of momentum. 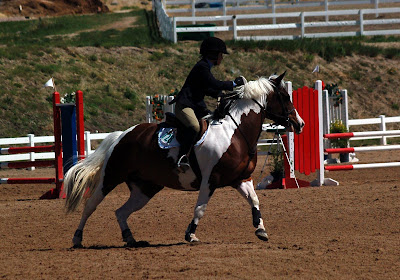 He's moving forward now, but you can see that he's strung out again. 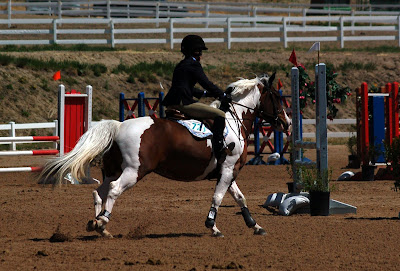 This resulted in a long, flat jump. Still, he was able to leave the rails up and scored a fast clear round. 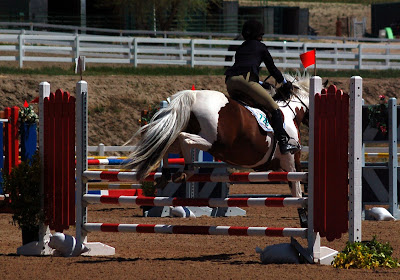 This is a nice pony. Even after galloping around like a bat out of hell, he quickly settled down to an easy canter... 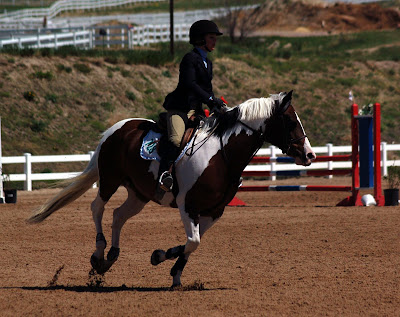 and walked quietly out of the ring. 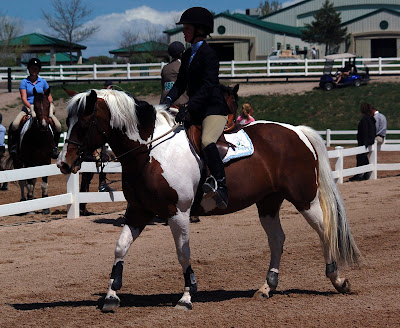 Well deserved pats for a good, clean round! 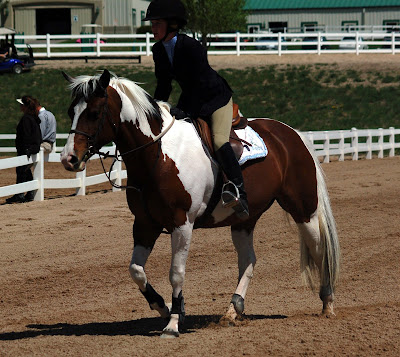