Today is the first Saturday in May and for the past 31 years that has meant one thing to me--the Kentucky Derby. Like many horse lovers, I have mixed feelings about racing. There's no doubt that it's hard on the horses. They're started too young, pushed too hard and too many racing stories have unhappy endings...


And yet, there's something magic about the Kentucky Derby. I do not have strong feelings about any of the runners this year, but that won't stop me from getting a little bit misty eyed when they step onto the track later this afternoon. 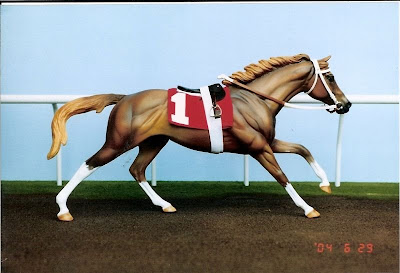 My children have no real interest in horse racing, but that hasn't prevented me from establishing a couple Buxton family Derby traditions. The first one is pretty obvious--we each pick a horse to root for. My kids make their selection based entirely on the the horses' names, and not surprisingly, they both were fans of I Want Revenge. Unfortunately he was scratched this morning, so they were forced to make last minute substitutions. Ryan selected Atomic Rain, but James was unable to decide between West Side Bernie and Desert Party. I told him that was ok. He can have two this year if he wants. My husband likes Bob Baffert so he will be rooting for Pioneerof the Nile. Although I strongly suspect the best horse ran yesterday, I have settled on Chocolate Candy as my choice. He ran a good race in the Santa Anita Derby, and I love the fact that his dam is by Seattle Slew and out of an Alydar daughter who was a half-sister to Affirmed. Seriously, how cool is that? 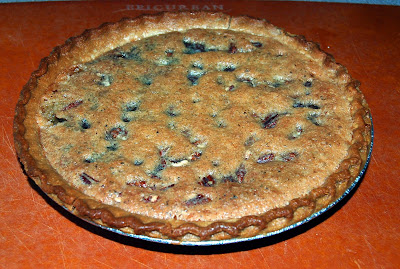 Our other Derby tradition is to make (and eat) Kentucky Derby Pie. I copied this recipe off Model Horse Blab a few years ago and it was an instant hit with my kids. It tastes like warm chocolate chip cookie dough served in a pie crust and probably has a zillion calories per slice. I only make it once a year, though, so I don't care. In case you are interested, here is the recipe:


Preheat over to 350. Melt butter in microwave and set aside. In medium bowl, beat eggs just enough to break them up. Add sugar and mix until blended. Stir in melted butter and bourbon. Blend in cornstarch. Stir in pecans and chips. Pour into pie shell. Place on foil lined cookie sheet and bake for 45-50 minutes. Cool one hour before serving.
Posted by Braymere at 11:09 AM