If wishes were horses and money grew on trees, this parade set by Erin Corbett would belong to me:

I spent a day hanging out with Erin in her studio earlier this month. That was a real treat as I've only occasionally had the chance to watch another tackmaker work. Tackmaking tends to be a solitary pursuit, and it's hard to think of new ways to do things. Erin and I use a lot of the same techniques, but there were a few things she did differently and better. Most of these things seem obvious in retrospect and were immediately incorporated into my own bag of tricks. I hope I was able to provide her with a few similar light bulb moments.

Here is a picture of Erin's workspace after we had made a mess of it. The English saddles in the lower left hand corner are both made by Jennifer Kistler. The Western saddles are by Erin. 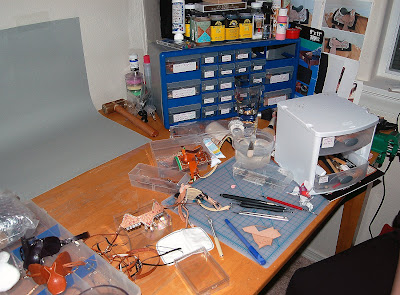 Erin's Western saddles are hand carved rather than stamped. Each part of the design is cut into the leather with a small knife. I find this method of tooling incredibly intriguing, and Erin was nice enough to give me a lesson in the basics of carving. It will be a while, however, before I can produce anything that looks half as nice as this.

Here is another closeup of parade saddle parts. The poppies were carved by Erin but painted by Tracy Eilers. Tracy is Erin's best friend and one of the hobby's most talented resin painters. So neat to have the work of two top artisan's in one piece! 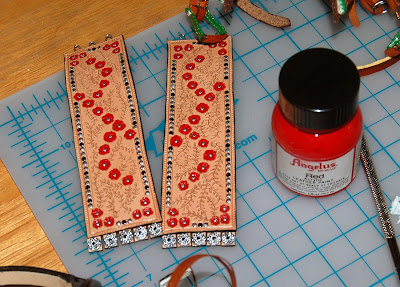 Hopefully some lucky person will snap up this parade set soon--I guarantee that even the most discriminating tack collector will not be disappointed with it.
Posted by Braymere at 8:55 AM

Labels: Tack by other tackmakers, the creative process