Heavyweight Draft Pull was another one of the events Cara and I watched while attending the National Western Stock Show last month. I'd never seen a horse pull in person, but I had watched one on tv and the concept is pretty simple. Basically this is an elimination event in which teams are asked to pull a load for a specified distance. The weight of the load is steadily increased until only one team completes the pull. If no team is able to do that, the winner will be determined by who pulled the heaviest load the greatest distance. Depending on the rules of the individual competition, teams are given either two or three chances to complete each round.

The arena set up for this event is very simple. Two parallel lines are drawn down the middle of the ring. These lines should be fifteen feet apart and the horses are not allowed to step on or over the line. If they should do so, they will receive a no score for their efforts.

Horses can be hitched to either side of the sled. As the class progresses, the sled will work its way back and forth across the arena.The distance the horses are required to pull varies from event to event. A quick Google search indicates that twelve feet is the most common length, but it can range from six feet to twenty seven feet, six inches. The competition we watched used a fifteen foot standard. This was marked with a simple rope and stake device. The ground crew would set up the stake by the back corner of the sled between each pull. The rope connecting the stake and sled was 15 feet long, so each pull was considered complete when the stake was pulled out of the ground. 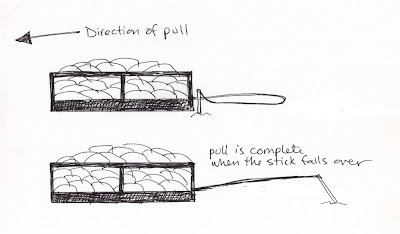 Pulling competitions are generally divided into light, medium and heavy weight divisions with the combined weight of the horses determining the division in which they will compete. We watched a heavyweight class, and most of the teams were between 4,700 lbs and 4,900 lbs. Without exception every single horse in the arena was a sorrel Belgian and they all had roached manes. Most, but not all, had docked tails.

Each team had a driver as well as two or three other people who helped with the hitching process. All these people were men. Attire was casual ranchwear. The horses wore collared work harnesses which ranged from very plain to very fancy. Some pulling associations require blinkers to be worn, while others make no such stipulation. If in doubt, it's probably safer to use them. 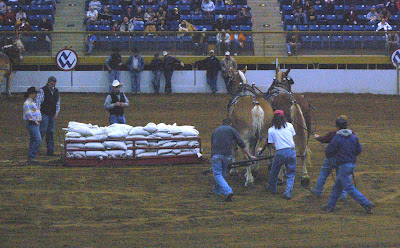 The horses were generally well behaved, but not surprisingly, they were very much on the muscle particularly early on. A few teams dragged their handlers around the ring and most did this little piaffe-y thing while being hitched up. 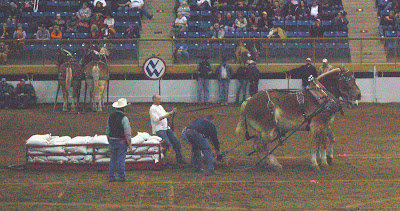 The sled at this event was loaded with sandbags. None of the teams had any problems until the load's weight reached 13,000 lbs. You can see this next pair of horses is pulling the load quite easily.

Only three teams were able to pull the sled when its weight was increased to 14,000 lbs. At this point we saw a lot of horses' legs buckling under the strain. Despite that, this did not seem particularly abusive. There were no whips in the ring and the officials were quick to sound the whistle when it was apparent that the load was too much for the horses. This pictures shows Fred and Duke winning the competition. This was the biggest team with a combined weight of 5,000 lbs and they were the only team to successfully pull 14,500 lbs the required fifteen foot distance. 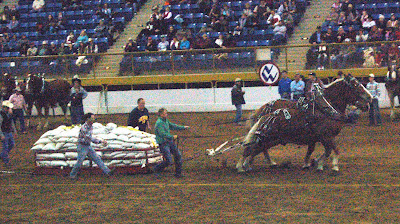 This is a very basic overview of the sport of horse pulling. If you are interested in researching it further, I'd recommend a Google search for either "draft horse pull" or "horse pull rules." Either of those will quickly bring up links to different pulling associations, their rulebooks, and lots of horse pull videos

I've never seen a horse pulling set up at a model show and there aren't a lot of molds which are suited for the event. Still, it's a pretty interesting event to watch and I hope someone found this to be helpful!