I get a lot of orders for "jumper tack", which I generally interpret as an English saddle and bridle with at least one or two jumper type extras. Probably the most common of those accessories is a full set of jumping boots.

If you've looked through a good tack catalog recently, you know there are a lot of different choices in equine leg protection. Open front boots, however, have long been the boot of choice with the jumper crowd. These boots protect the horses tendons while still allowing him to "feel" the jumps. They are commonly paired with shorter ankle boots on the hind legs.

Most high end jumping boots are feature a leather exterior and either sheepskin or neoprene lining. Front boots generally have three or four straps which may run parallel to one another or criss cross as in the picture below. You will also see some boots with just two straps, but these are almost always those that fasten with velcro rather than buckles. Ankle boots generally have two straps, although some of the velcro varieties will use just one.

In this picture, Dos Equis is shown wearing full protective leg gear--bell boots and open front boots on his forelegs and ankle boots and pastern wraps on his hind. The pastern wraps are made out of neoprene and fasten with velcro. 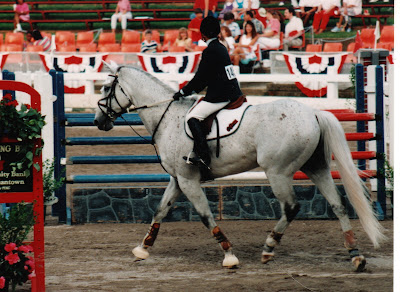 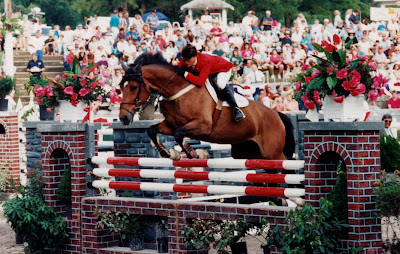 Margie again, this time on the well known stallion Saluut II. He is wearing neoprene lined leather open fronts and hind wraps. It is not unusual to see different styles of leg protection on the front and hind legs. 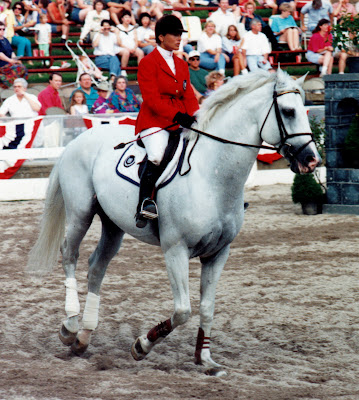 Of course not all jumping boots are made of leather. Synthetic boots are also a popular choice due to their lower price point, easy care and durability. They are also better in wet, muddy situations as they do not get water logged and heavy. These boots generally do not fasten with buckles. The Roma boots pictured below use wide velcro tabs instead. 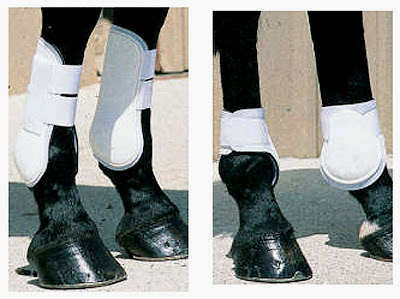 Synthetic boots are available in a multitude of colors, but most competitors tend to stick with white, black or brown. 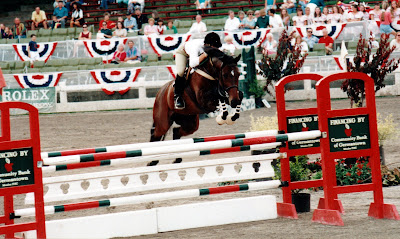 In this picture, Chuck Waters and Gold Card are competing in a pair of white boots decorated with an American flag. Note, the leather ankle boots behind. 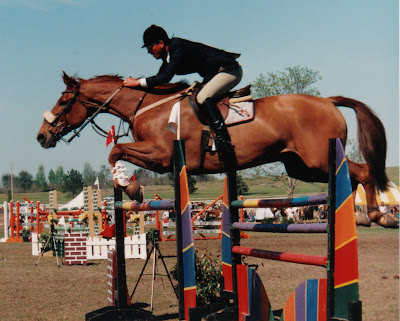 Although less popular than boots, some riders do show their jumpers in wraps. This picture is of my friend Leigh showing her horse Montana in an Amateur Owner jumper class at the Kentucky Horse Park. 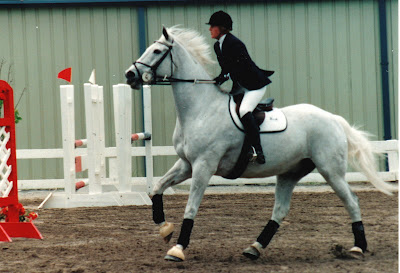 This Grand Prix jumper (Money Talks, ridden by Hugh Graham) is also wearing front wraps. The black stripes at the top of the wraps are electrical tape which makes the wrap more secure and less likely to come undone on course. This horse is wearing leather ankle boots on his hind legs. 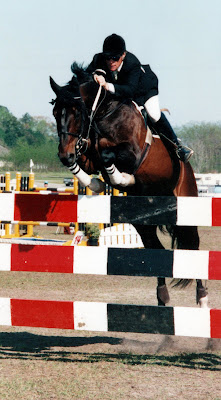 Of course, there is no rule requiring the use of either boots or wraps in the jumper ring. I have a surprising amount of pictures showing Grand Prix jumpers doing just fine with little to no leg protection. This photograph shows Mafito clearing a big oxer in only bell boots. 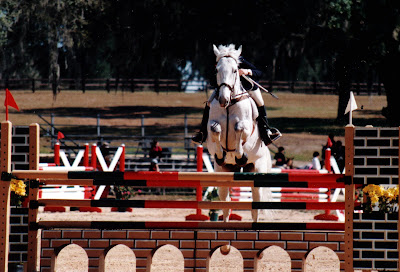 And this is Pilot Point and Vicky Miller entering the Grand Prix ring in Ocala, FL completely clean-legged. This horse was an absolute superstar in US Grand Prix League competition in the 1990's, and he often jumped around without the benefit of boots. 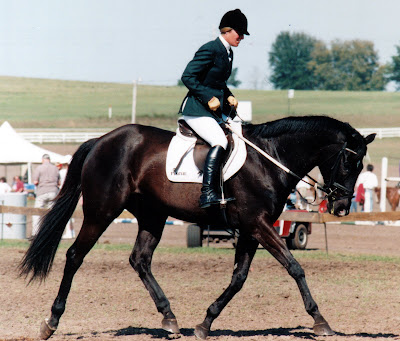 The one thing you will almost never see in the jumper ring--at least at bigger shows--is closed front splint boots. As a model horse judge, I'd rather not see your Western boots on your jumper. That said, I don't think this is something that should be judged per se. The use of boots in the jumper ring is a matter of convention and personal preference. It's not governed by any show association and therefore there really isn't a right or wrong. If you have a judge tell you that the only reason your jumper didn't pin higher was his boots (or lack thereof), please feel free to refer them to this posting!
Posted by Braymere at 8:55 AM