If you were to ask my son Ryan to describe Valentine's Day, he would tell you that it is a stupid, lovey-dovey holiday with really great candy. I don't entirely disagree with that assessment, and my husband and I rarely do anything to mark the day. In fact, my favorite Valentine's memory has nothing to do with love and romance. It does, however, have a lot to do with horses and horse shows!

Like so much of the hunter/jumper world, the mobile tack shop where I worked wintered in Florida. Typically, we'd head south in early January and would not return until mid-March. The bulk of that time was spent in Ocala, which was home to the six week long HITS (Horse Shows In The Sun) circuit. I loved going to Ocala. The shows were big and bustling with horses and riders from all over the United States and Canada in attendance. The weather was consistently great, and there was a sort of optimistic, party atmosphere that made even the longest days go by quickly.

But I had another reason for liking my Florida winters--Ocala was the home of my friend Cathy. 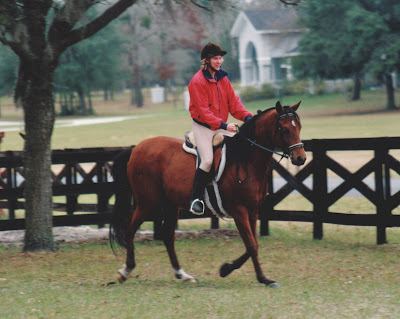 I had not known Cathy prior to my first winter circuit. I had, however, known of her, as she was my best friend's favorite penpal. When Trish found out I'd be staying in Ocala, she sent me Cathy's phone number and said, "You two should meet." I felt funny calling someone I did not know, and almost didn't do it. Thankfully, I got past that and made the call. After a few awkward minutes it became obvious that we had a lot in common. We made plans to meet, and almost immediately we were best of friends. For the next several winters, I spent nearly all my non-working days with Cathy. 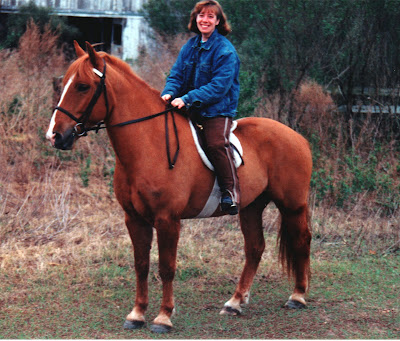 Much of that time was spent riding Cathy's horses, of which she had several. Arabs were her breed of choice and the bay Arabian in these pictures was her main show horse. The chunky little chestnut was a Belgian cross named Seneca. She also had a retired half Lipizzan gelding and several other Arabians. 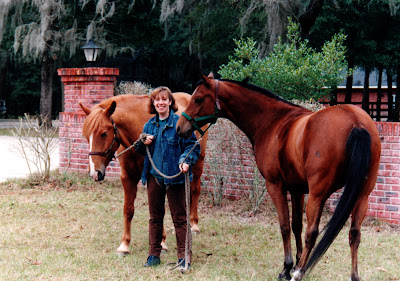 We did more than just ride, though. Ocala is truly horse country and Cathy was a master at setting up little field trips to different breeding farms and equestrian centers. One of her favorites places to take me was Rohara Arabians, which was home of Ivanhoe Tsultan. I am not a big Arab person, but I had heard of this horse. Although his own show career was very short, he was an immensely successful sire who had produced national champions in halter and every major performance division, including dressage and racing.

For some reason we were allowed to take pictures of every horse at Rohara except Ivanhoe Tsultan. This did not make any sense to me, and you can see from the picture below that I was unable to resist sneaking a couple quick photos. He did have some age on him and it showed, but he was still a lovely, healthy horse. 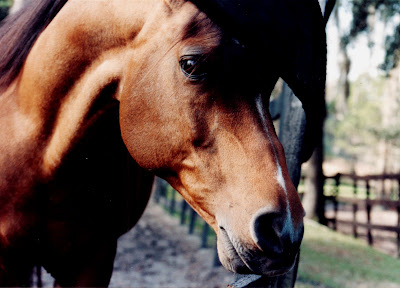 I do not remember the name of this gray stallion, but he was also standing at Rohara and Cathy was quite impressed with him. 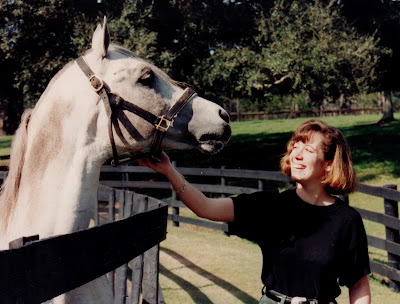 Another one of our field trips took us to a Thoroughbred farm called Silver Leaf where we met Mister Frisky. 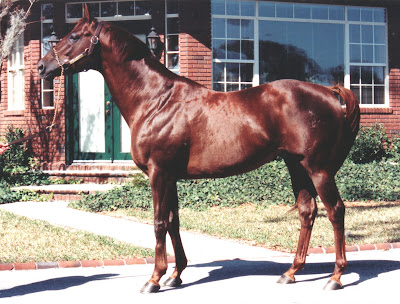 Race horse fans may remember Mr Frisky as the Puerto Rican phenom who went into the 1990 Kentucky Derby with an unprecedented record of sixteen straight wins. He finished eighth in the Derby and third in the Preakness. Shortly after that, he was diagnosed with a life threatening illness that was thought to have contributed to the losses. He recovered and eventually returned to the track, but never matched his early brilliance. 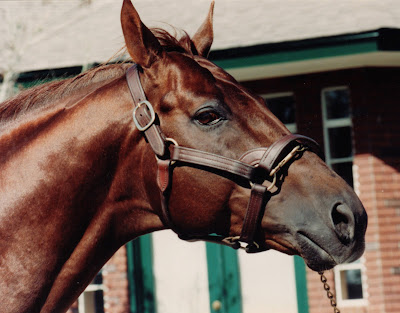 The most famous horse we visited was the Quarter Horse stallion Rugged Lark who was standing at Bo-Bett Farms in Reddick, FL. With his trainer Lynn Palm, Rugged Lark won the Super Horse title at both the 1985 and 1987 Quarter Horse Congresses. In recognition of this achievement, he had a Breyer horse sculpted in his likeness. Unfortunately, that particular model is not one of the nicer pieces in the Breyer line-up. Let me assure you that the real Rugged Lark looked nothing like his plastic counterpart! 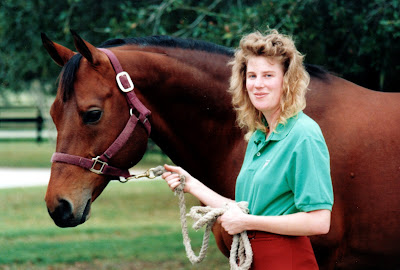 So what does all this have to do with Valentine's Day?


Well, the first time Cathy visited me at the HITS showgrounds was on a Valentine's Day. The stabling there was a looong way from the rings, and I wanted to take her back to the barns to meet the horses. Rather than walk all that way, I suggested we ride on my boss's scooter. Cathy agreed but did not tell me that she'd never ridden on a scooter and was deathly afraid of them. We climbed aboard and had barely set off when the problems began. I drove over a little bump and Cathy panicked and grabbed on to me. I lost my balance, she lost hers and the scooter went down. No one was hurt, but we had not yet cleared the vendor area so our crash was highly public. I was terribly embarrassed, and predictably, the teasing began immediately. Cathy's comment was that she couldn't believe I'd "dumped" her on Valentine's Day. 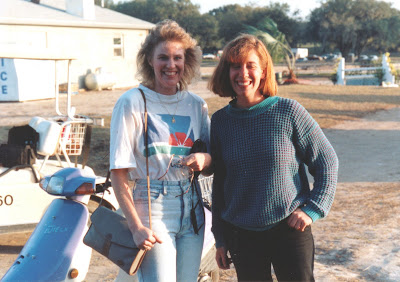 That became our big in-joke. Years after I'd stopped wintering in Florida, I could expect to hear from Cathy on Valentine's Day.

Unfortunately, that's no longer the case. We started to lose track of each other when both of our lives got crowded with husbands and kids and stuff other than horses. I didn't think it would be a permanent situation but time keeps going by and somehow it's been five years since the last Christmas card. I look for her every now and then on Facebook and Google, but she has one of those names that makes Internet searches difficult. Hopefully she'll decide to look for me one of these days. I do miss her--especially on Valentine's Day!
Posted by Braymere at 9:40 AM