I've finally finished editing pictures from the draft show that Cara and I attended a couple weekends ago. This first group of photos focuses on the hitch horses--those are the elegant, leggy drafters that pull the show wagons.

Whenever I go to a horse show, I try to arrive early so I have time to visit the stable area and see the horses up close. I was not the only person who had that idea at this show. The stable area was crowded with camera wielding spectators and giant carts and wagons. 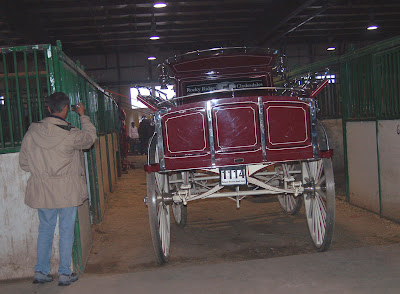 These things were everywhere. 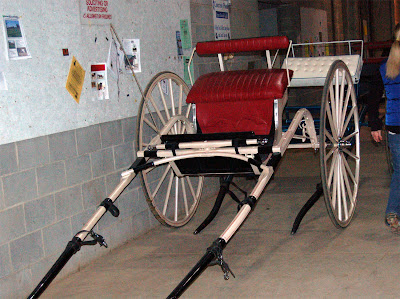 But wagons weren't the only thing blocking the aisles! 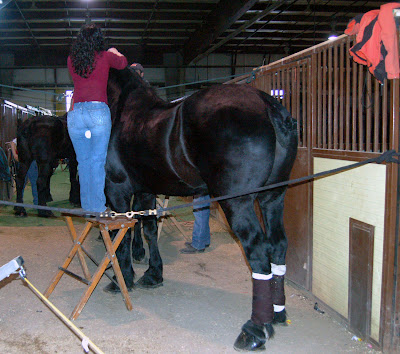 Everywhere you looked there were gigantic horses being beautified for the showring. 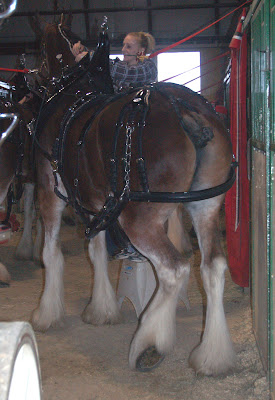 These grey Percherons would be the eventual winners of the eight horse draft hitch class. 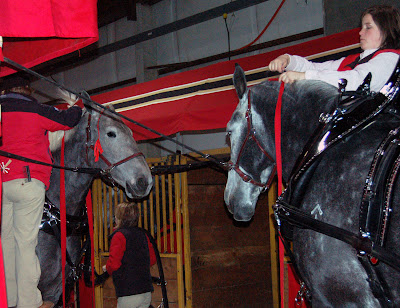 Close up of a Belgian's tail. All the hitch horses had docked tails. 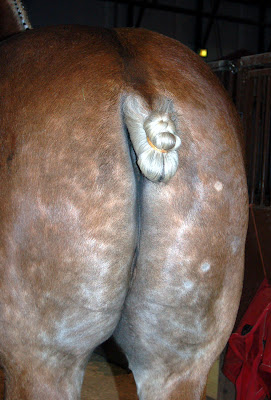 I have been taking Cara with me to various horse themed outings for several years now. Usually when she asks questions I am able to answer them, but it did not take long for either of us to realize that my draft horse knowledge is pretty limited. One of the questions I did not know the answer to was "What's up with the shoes?" in regards to this Clydesdale. Since I didn't know, I took a picture. Maybe someone will enlighten me. They do look pretty weird! 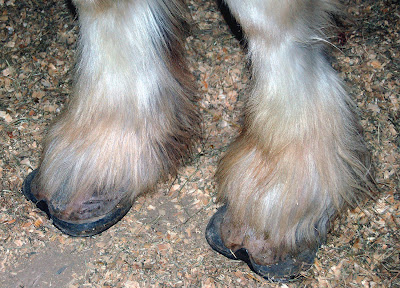 Everything about these horses was big--even their muck carts! I have never seen so many jumbo sized muck carts in one place in my life. Trust me, this was not the biggest one. 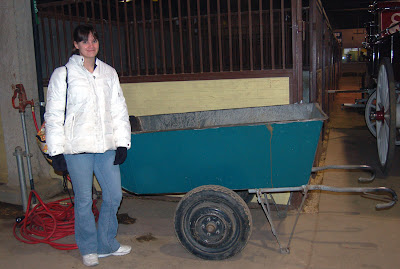 Those horses are magnificent I was tempted to stay in the barn area all day. Eventually, however, we did go watch the show. I took a few pictures of the eight horse hitch class, but none come close to portraying the sights and sounds of that event. Oh, it is wonderful to hear the thunder of hoofbeats and jangle of harness as a team like this passes in front of you!

This picture shows a few of the teams as they stand in the final line up waiting for the placings. There were seven teams, each with eight horses. That's fifty six draft horses in the ring at one time--truly an amazing sight!

According to the announcer, it takes well over $200,000 to put together this caliber of hitch team, and most are owned by corporations who use them for advertising. I'm glad there are still companies that choose to spend their money like that so that people like me can admire horses like this, both in the barn and the showring.
Posted by Braymere at 8:22 AM