There's no better way to start the week than with a guest blogger show report. Many thanks to UK hobbyist, Curtis Sayers, for sharing his experience and pictures from last Saturday's Halloweenies show in Hampshire, England.

Saturday was the annual minis-only and wonderfully Halloween themed show, ‘Halloweenies’. Hosted by Claire Goss, it featured a weeny (:P) performance division, and the standard OF, CM, AR/AC and Animal Artistry halter divisions. As an added twist, there was also a little fun division for all things fantastical. I personally hit the rings in the first class of the day – costume. 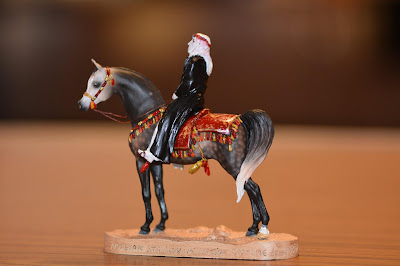 My CollectA Lipizzaner jumped through all the right hoops, 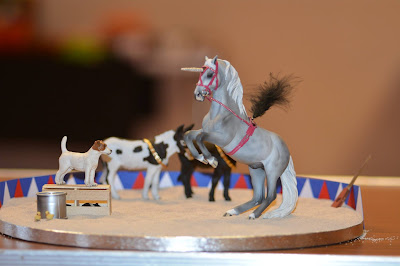 and came a modest second. 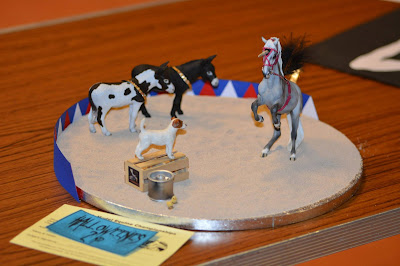 The success streak didn’t last, as the next class was one I hadn’t been best prepared for. I didn’t see the winner of the class, until it appeared in the Performance championships later.

I continued to persevere towards my goal to enter all seven performance classes, with what I had hoped to be seven polished entries. This was my English Ridden effort. The description read: The pony club games are taking place indoors today, since it’s raining outside! 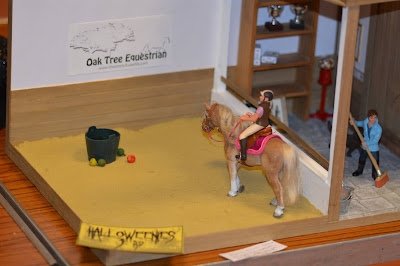 The winner of the class was a simple but efficient dressage entry. 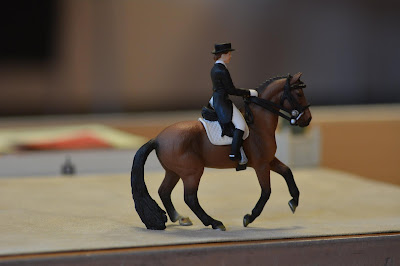 I wish I had been able to pay more attention to and photograph all entrants in the ‘Tack and Turnout’ class, if for no other reason than to ogle the cute little saddle sets I imagine were on display! However, again, I only managed a shot of my own entry… 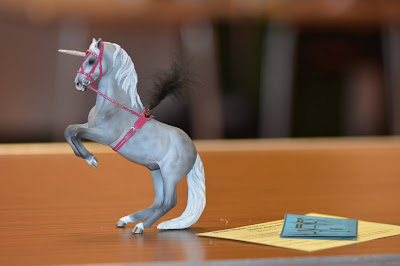 and the class winner. 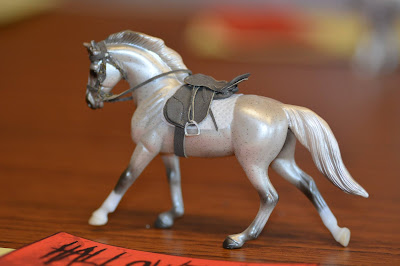 The fifth class had me excited. This was one I had prepared for. I had documentation, and ironically my inspiration had come from this very blog! The Western class was bound to have lots of gorgeous entries with lovely tack, which I just cannot brave yet. So I had to be as unique as I could. 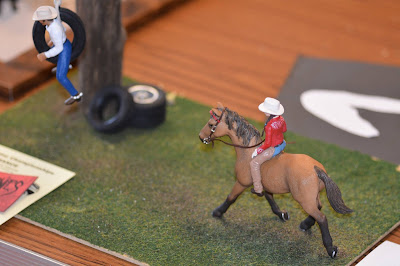 I took the class with my ‘Rescue Race’ entry, and was proud of this unusual venture. I still feel the chicks won it for me! 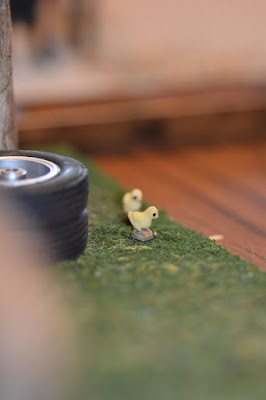 My beloved beach donkeys have taken the Scene class winner and champion title of performance at Halloweenies the past two years running, and I had every intention to make this year a third. Unfortunately, the details I had hoped to get into the scene were mostly unfinished or not started, due to personal circumstances in the lead up to the show.

There was meant to be a boat.

I pulled together a (fairly lacklustre) scene with some cute tack pieces and hoped for the best. It didn't place. 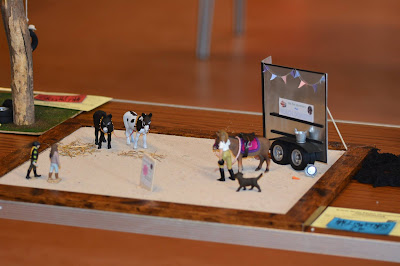 I had anticipated this, and so I took my beloved stable diorama with me also, in hopes of a realistic shot at winning that scene class. Alas, it was not meant to be. 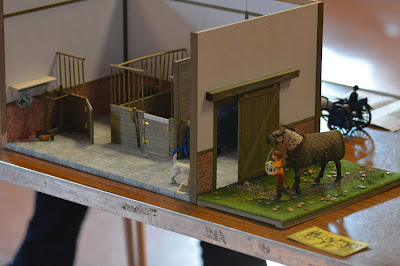 I might not have won, but the winning piece really was lovely! 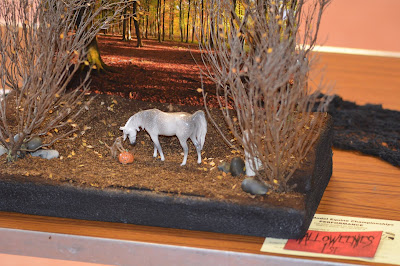 After setting up seven performance entries in six classes, and knowing very well that my ‘Other Performance’ entry was very much a last minute scramble, I was tired of waxy fingers and swearing at reins. I sat this one out. 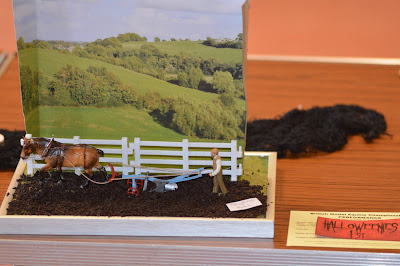 The performance winners returned for the championship, and although I had quite disappointed myself with just the one win, I will admit I was grateful to have only the one entry to set up! 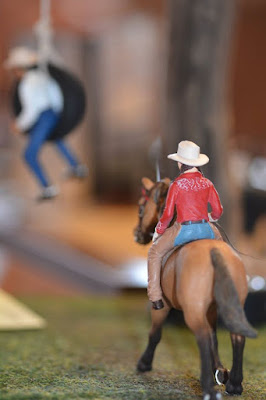 The Champion was Lynne Elvin's jumper. 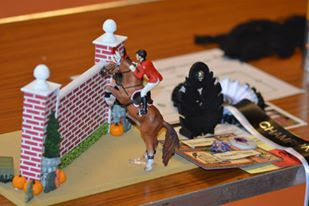 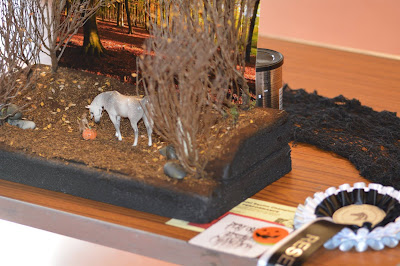 And Reserve to the Reserve was my Western entry. 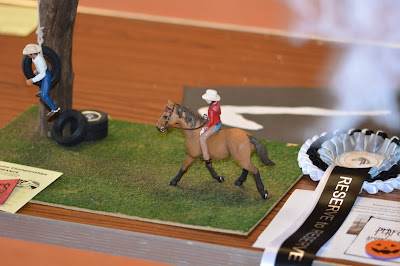 After shoving my dioramas and props quite uncaringly back on and under my table, I was able to persevere with the halter divisions. 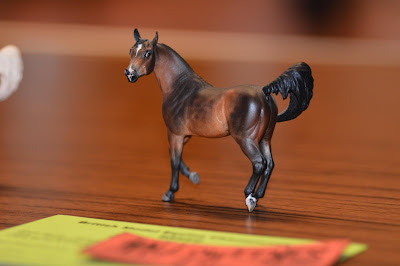 When it comes to minis, these aren’t my strong point, so I much preferred simply looking at and photographing everyone else's beauties! 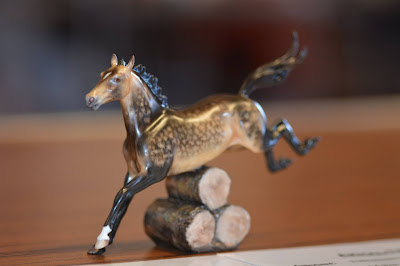 And it wouldn’t be fair not to take a photo of our gorgeous host! (She photobombed my pony pictures!) 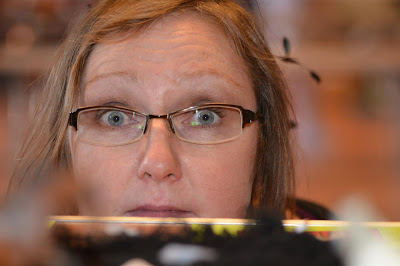 Thanks again, Curtis, and congratulations on your well deserved successes. I think all your entries--even the "lacklustre" beach scene--looked fabulous!
Posted by Braymere at 8:01 AM