Although I've enjoyed all of guest blogger, Lauren Mauldin's model horse showing posts, this is the one I've been waiting for.  I've often wondered what causes dedicated and enthusiastic hobbyists like Lauren to drop out of the hobby.  Now I know, and truthfully, all these reasons resonate with me.  I'm not planning on going anywhere, but if I do, my "leaving the hobby" post will probably read a lot like this...

Last week I told y'all all about my favorite aspect of model horse showing, performance classes.  After showing all the pictures of my miniature kingdom and how much I loved it, today I'll be touching on why I stopped showing and collecting as a hobby.

Most adventures that were met with such enthusiasm don't end abruptly, but I remember sitting in my house when we first moved to Texas after Breyerfest and staring at my shelves of models and props.  I briefly thought about checking the message boards, or looking online for a new live show coming up... but then I thought about my horse at the time.  I also thought about a new camera that I wanted but couldn't afford (the same Canon 60D I shoot with now)... and the model collection started going up for sale that weekend. 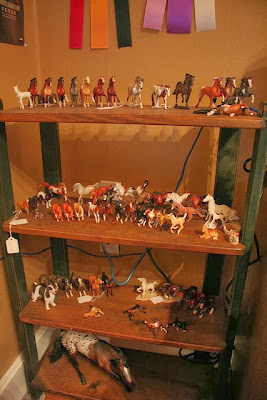 Of course, I didn't sell a collection I put tons of money, creativity and time into for the past several years on a whim - here were some of my reasons.

I believe this is a symptom of all collectors, but being in the model world you see a lot of people that are never satisfied with what they actually have.  There is so much buzz on the newest Breyer or artist resin.  Everyone has a want list.  There's a hobby habit called "collecting a conga" where people will try to get as many OF (factory finish) horses in a certain mold as possible with the goal being have every color ever made.

I had a main Cigar (Breyer Traditional race horse) conga, and found myself creating several mini ones.

There's nothing wrong with "collecting them all" or wanting new things, but I try to be a person that is content with my needs in life versus constantly chasing the wants.  I have a bit of an addictive personality and am not the best financial planner, so when I found myself buying models I wasn't even sure I liked at the end of the day... I was a little alarmed.  Basically, it got very tiring to be on this constant search for something that I couldn't quite put my finger on.  Not everyone in the hobby is like this, but there are some who don't seem to ever be satisfied and I was worried that was becoming me.

I touched on this on some previous posts, but you'd be shocked at how expensive these little buggars can be.  I did as much DIY of my props, tack and painting as I could but still ended up buying a lot of performance related props, tack and dolls. 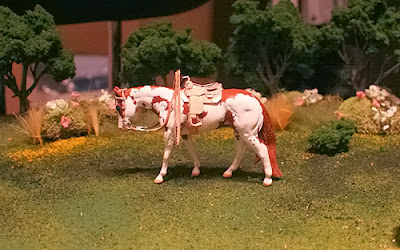 After showing locally for a year, I wanted to be able to "play with the big boys" and go to some of the major shows across the country.  At shows that level, my "budget friendly" performance wasn't really cutting it.  It isn't unusual for a CM/AR performance entry to have..


Now not every entry was certainly that expensive and I'm sure some were way, way more... but you get an idea of the cost of a highly competitive entry.  I should mention that some of the props that cost that much could be used for more than one set-up, but really it's not a cheap hobby.  When I looked at the kind of money it would take to be openly competitive, my wallet hurt a little. 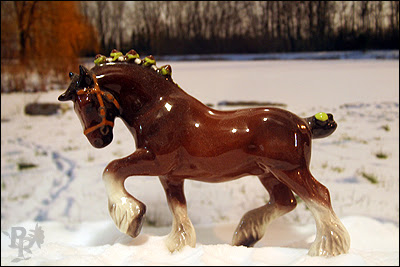 If I didn't want to fork over some major cash for national level props, tack and horses... I needed to learn to make them myself.  I was okay at making these things, but not great.  I can't begin to describe to you the amount of hours people like Jennifer Buxton put into their craft in order to make such fine works of art.  Me?  I'm just not that patient.  At the end of the day, I wasn't willing to put that much time into the hobby in order to become as good as I needed to be. 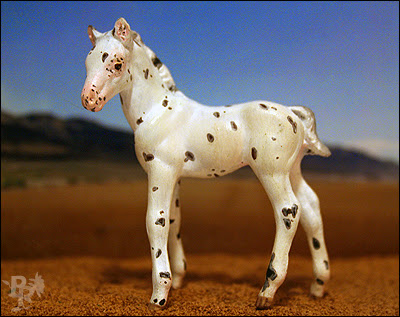 Like any hobby or sport, there are great people and then there are bad apples.  Most of the hobby people I met were great.  I mean super friendly, knowledgeable people that were kind and friendly to me when I needed it.  On the other hand, one example of really bad sportsmanship kind of scarred me to the point I will share it with you briefly. 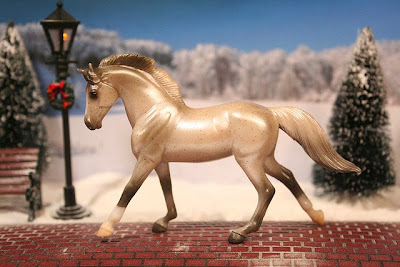 Once in Massachusetts I volunteered to judge performance at a model show.  When you judge, it's almost always 100% volunteer.  You don't get paid and you also don't get to show in the division you are judging (in this case, my favorite).  Still, it's a great way to give back to the hobby... that is until you have people who ruin it for you.  To make a long story short, there was a model in an awkward stance of gait and I made a call as to which gait it was going.  Looking back, it wasn't the right decision, but I left a feedback post-it-note on the entry with suggestions on how to fix for future classes.  It was quite obviously one of the priciest set-ups on the table, and the owner was not pleased at my decision.  For the rest of the day, her and her friend snickered at me and rolled their eyes at me and pretty much ruined my experience.  I was shocked.  These were not kids.

I wish I could say that this was the only time I saw people getting upset over plastic ponies, but it was not.  Stuff like that really takes the fun out of it for everyone, and when some high stake (expensive) prizes were on the line I caught myself getting upset and moody (though I sure hope I did not show this outwardly) about a model placing low at a show.  When I felt that way, I knew it was time to step back. 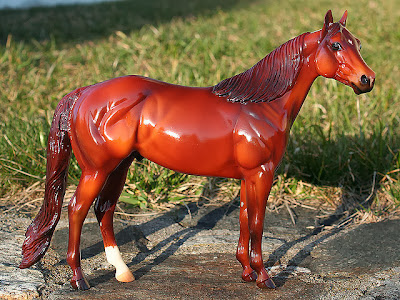 I remember a conversation I had with a few friends at a model show near Boston where the question came up in conversation, "Would you give up models in order to ride real horses?"  While they said they preferred the model world, my answer was an immediate yes. Real horses over models, always.  I guess at the end of the day, the models were mostly a filler for me to keep horses in my life during a time of no horses.

When I sold my collection, I was able to pay off my credit card and buy a nice camera... which I used to take pictures of my real horse.  I still enjoy looking at the new model horses that come out and I enjoy model horse blogs, but I don't have the compulsion/desire to collect them all like I used to.  I don't think I will necessarily be out of the hobby forever, but for now I'm still very happy with my decision to step out for a while and enjoy the smell and feel of my real life Breyer ;)

Also, don't forget about the giveaway of a little pack of Novice Live Show Quality or Photo Show Quality prizes. I'm drawing the winner in one week and I've found some more fun goodies to add including a beautiful stock horse medallion painted by Laura Skillern and another adorable SM custom! 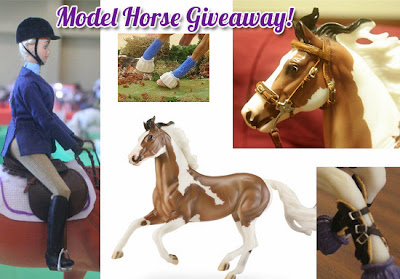 Use the widget below to enter for your chance to win these fabulous prizes (and maybe some other surprises)!
a Rafflecopter giveaway
Posted by Braymere at 9:02 AM