Yesterday's post got me wondering--exactly how many project ponies do I have?  With camera in the other, I set out to conduct an inventory.
It took a while but the results are in and it's not pretty.  Counting the new arrival, I have identified no less than fourteen problem ponies lurking on my shelves.

In truth, it isn't fair to label some of these problem ponies.  The only problem Roundapony has is that I'm afraid to paint him. 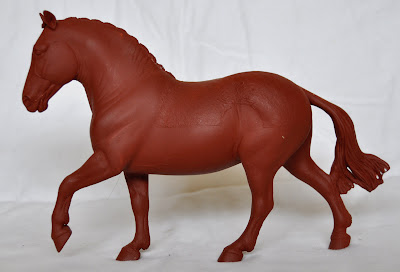 Cerridwen is another innocent.  She still needs a bit of prepwork, but otherwise this lovely girl is ready for paint. 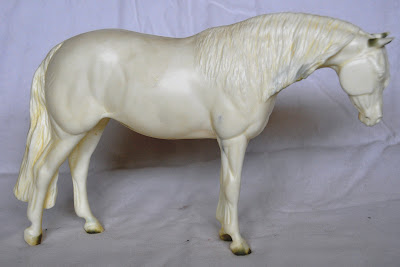 The unpainted Otto was supposed to leave after I bought Dagobert.  That was more than a year ago.  I have no idea why this one is still on my shelf. 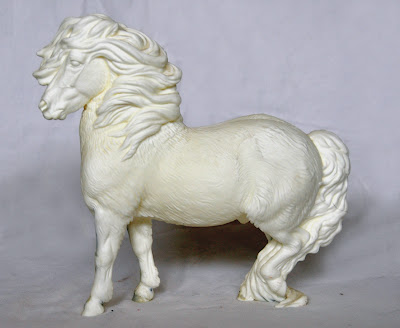 These two fall into the good intentions category.  Both remain relatively intact, but you know me--I have big plans. 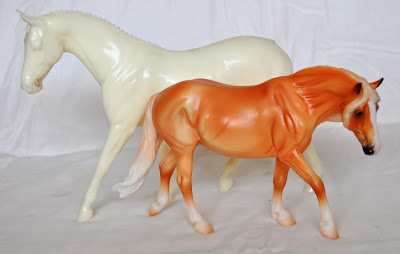 I bought this Bally Cor resin several years ago.  She was described as a traditional sized Connemara pony, but she's as big as most of my traditional scale horses.  I like my ponies pony sized, so I set out to make her something else.  I reset her head and neck and added feathers to her feet.  I think I was going for a Welsh Cob or Gypsy Cob or something along those lines.  I can't really remember.  It's been a long time.  I think I never really forgave her for being so large. 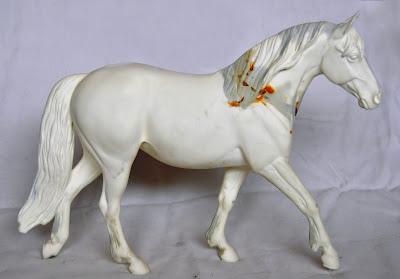 Little Experiment has been featured on my blog several times.  I've been working on him on and off for more than a year.  I'm not sure he'll ever be finished, but unlike Bally Cor, he looks a lot better now than he did when I bought him! 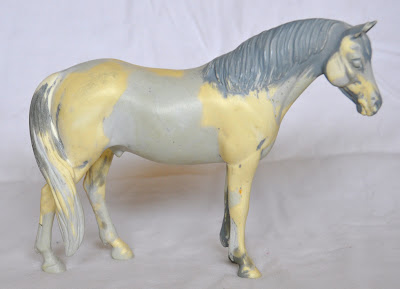 You would think I have enough unfinished project ponies of my own that I wouldn't need to buy someone else's, right?  Well...  not so much!  This BHR draft was started by Melanie Miller.  She removed the original mane and tail and began his transformation into a Norwegian Fjord.  I reduced the size of his feet and resculpted his face to look a bit more ponyish.  He could still use some help in that department, though.  Sigh. 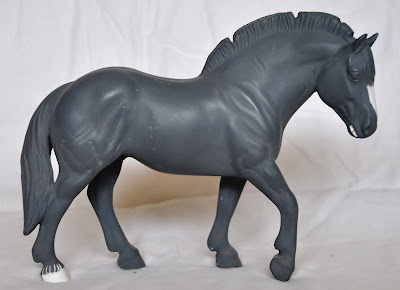 This is the China version of Karen Gerhardt's Streetwise resin.  He needs a new tail and a base, but otherwise he's in good shape.  Back when I thought he might get finished, I'd envisioned him as a leopard Appaloosa POA. 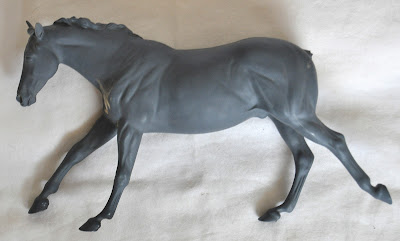 To be technical, I have three AA ponies that need paint, but the Dartmoor is hanging out with Tiffany in Illinois so he doesn't get counted! The Welsh Cob looks pretty rough, but mostly she just needs to be stripped and to get a peg in one foot.  I hope to eventually have her painted as a Trillium portrait.  The other one is probably the biggest problem pony of them all.  I bought him for $50 knowing that he had one broken leg.  Unfortunately, he arrived with two broken legs, broken ears and broken mane tips.  I fixed most of that, but then the leg broke again.  Last summer I bought Jane's Dunkirk Leeds, so my motivation to attempt another repair is pretty minimal.

Last and probably least are these two old customs.  The one on the left is a Classic Andalusian stallion.  I remade it into a hunter pony mare for a customizing contest on Model Horse Blab.  I think it goes without saying that I didn't win!  Ha!  Actually, she's not that bad.  She probably wasn't even the worst in the contest.  The other one is a gaming pony customized from the troping Quarter horse mare.  Way back when that mold was new, I got several orders for tack to fit it.  I bought one to use fitting, but I hated the way she looked on my shelf.  I decided to customize her into something I liked better, being sure to leave all the important head and body proportions the same.  This is what I came up with.  I actually think she's kind of cute!

So, there they are--the Problem Ponies of Braymere Custom Pony Sanctuary where there's always room for at least one more!
Posted by Braymere at 2:54 PM