This isn't the post I had intended to run today.
Then again nothing about today has gone according to plan.   Instead of spending the morning with Trillium in Watkins, I got to drive to the doctor's office and the ER and the pharmacy and...  Well, you get the idea!  Everyone is fine and all's well that ends well, but I am worn out and no longer feel like writing a serious piece about tack friendliness.
Fortunately, I have a back up plan.  Just this morning, reader Joanna Kindley sent a couple new entries to the Bargain Barn.
First up is this lovely original finish Brave Hart resin. 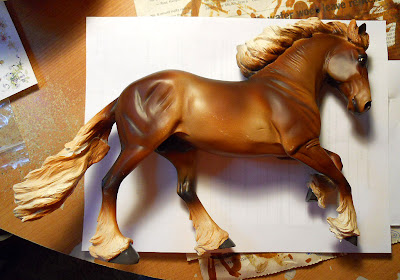 Jo writes:  I just recently started to buy resins.  I have 3 to date plus several I am paying on, but won't see for several months.  Anyway, I answered an ad on MH$P for a resin for $25.00.  It said his name was Braveheart and when I looked it up, and based on the price, I was convinced he was the SM sized resin.  I also guessed he had a rough paint job and was pretty much a mess.  He arrived last night, and I was blown away.  he turned out to be Brave Hart by Sheryl Leisure, and he has a gorgeous chestnut paint job.  Can you believe I got such a stunning resin for $25.00?  I am on top of the world. 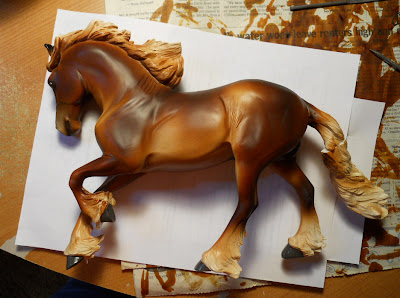 This little cutie is one of Jo's other resins.   Now I'm not an expert when it comes to minis, but something about this one looks kind of familiar... 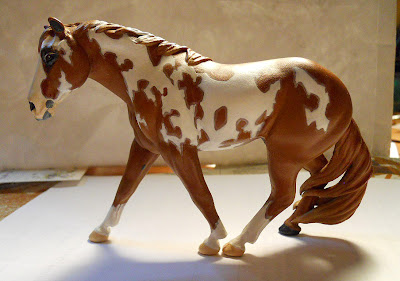 Here's why:  Oh, one of the other resins I just bought, is called Mighty Mouse and he was made by Tiffany Purdy before she was a Purdy, I think.  Evidently it was only a run of 10.  I will send you a pic of him too.  I know you and Tiffany are buddies.  I just love him, he such a neat little guy!!!!  He is in the LB scale. 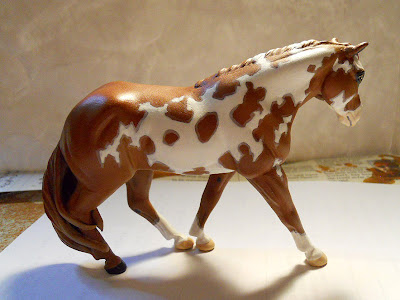 Thank you so much, Jo, for sharing your pretty resins with me.  I actually have a chestnut Brave Hart resin, but I did not get him for twenty five dollars.  And that little paint...  he's Purdy darn cute!