I am a thief

Back in 1982, my best friend Sarah decided she wanted to buy some model horse tack.  She sent a WANTED ad to Just About Horses magazine and began waiting. 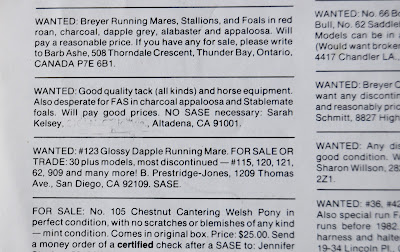 Everything moved a lot slower in those pre-internet days.  Just About Horses was only published four times a year, so first there was the long wait to see her ad in print.  Then, after what seemed like an eternity, the sales lists began to arrive.  We pored over each and every one of them, trying to figure out the best to spend her money.  Eventually she bought a pair of splint boots from a tackmaker in Colorado.  By the time they arrived, nearly half a year had passed.
Fortunately, the boots were worth the wait.  They were made with real leather and featured the tiniest little buckles I had ever seen.  It didn't matter that we could barely get them on and off our models.  They were perfect in their imperfection.
I didn't steal the boots.
I did, however, keep the photo that had accompanied their maker's saleslist. 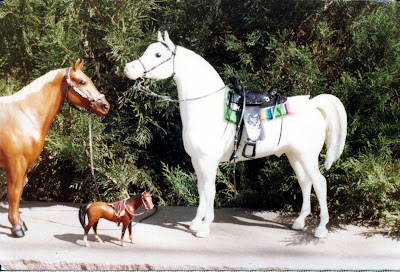 As noted on the back, this photo was not meant to be a giveaway.  Sarah was supposed to return it when she placed her order. 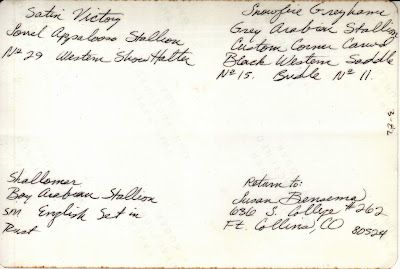 I'm not sure how it ended up in my possession, but I have had it with me for some thirty years.
Susan, I hope you can forgive my thievery.  I could return the photo now, but honestly, I'm pretty attached.  Even after all these years, I find it inspirational!
Posted by Braymere at 11:33 AM

Labels: hobby nostalgia, my hobby life, Tack by other tackmakers