by Christie Partee
photos by Jennifer Buxton
Equipment
Model horse tack has come a LONG way since the days of us having one western and one English saddle, and using these saddles for every class in the division! Now, I can tell you that when I show one horse in a typical western division, I usually change tack 3-4 times (gaming saddle, cutting/reining saddle, roping saddle, rail class saddle)! Maybe I am just excessively fond of tack? But the model horse hobby has followed the real horse world, and we do have specialized saddles for every discipline.
A good roping saddle can be summarized in two words: HEAVY DUTY. These saddles are built on a heavy rawhide and wood tree, and they are very sturdy. They cover a lot of the horse’s back, unlike a gaming saddle, and they are not built to enhance the horse’s motion like a cutting/reining saddle. These saddles are built to hold a fighting calf/steer by the saddle horn, and to not move an inch on the horse’s back. You do not usually see a lot of silver on a roping saddle, such as silver plates on the corners, etc. but occasionally you will see some conchos or a cantle plate. 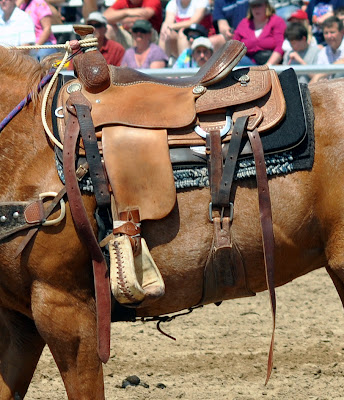 They are often roughout leather, but some are completely tooled. This is purely the cowboy’s preference. Some like the extra “grip” that the roughout provides (especially in team roping), but other cowboys like to go a little fancier with a fully tooled saddle. I admire NFR-qualifier Stran Smith’s lovely roping saddle, which is fully tooled and covered with silver! 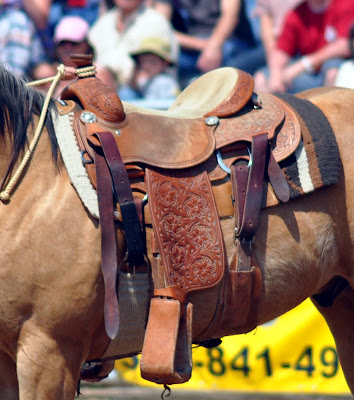 The girth on most roping saddles is a traditional mohair string cinch. These are used because they hold the saddle in place, and do not slip like the modern neoprene cinches. Although I love the neoprene cinches for trail riding and rail classes because they do allow the horse’s sweat to act as a lubricant, this is NOT what you want in roping. 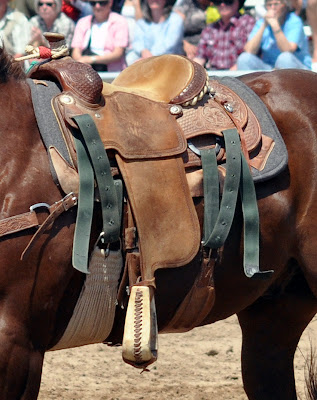 ALL tie-down roping saddles will ALWAYS be double-rigged, and the rear cinch on a tie-down roper’s saddle will always be pulled snug against the horse’s belly. The rear cinch is extremely important because it keeps the saddle from popping up on the horse’s back when the calf is pulling on the horn, which would hurt the horse’s back. (And you don’t want your $40k roping horse to be sidelined with a sore back, right?) The rear cinches are many different types and vary by personal preference; Jennifer’s photos show mohair string, hospital fleece, and plain leather. 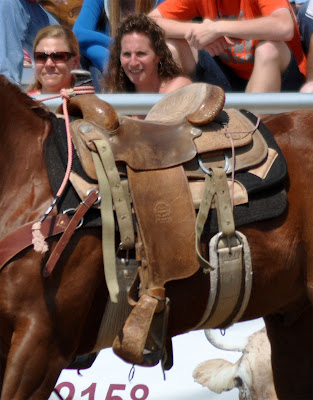 Saddle pads are again the roper’s preference, and they almost always use more than one to help keep their horses’ backs cushioned. Usually one of the pads is a thick felt pad with wear leathers under the rigging straps, and the other one will be a Mexican blanket, but that does vary. One thing you do NOT see is the fancy blanket pads that are used in the Western Pleasure show ring classes. These do not hold up to the heavy work in roping, and they also do not cushion the horse’s back enough for roping. 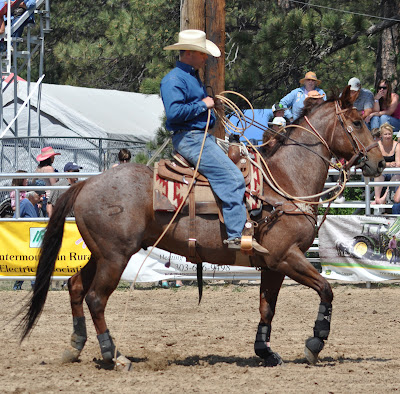 Most tie-down ropers use a breastcollar although Jenn does have pictures of one horse who isn’t wearing one. 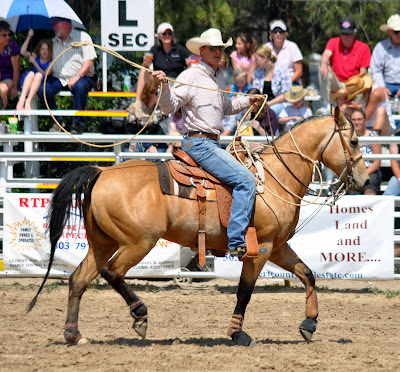 Again, it is the rider’s preference, but most of them use them. The type of breastcollar varies, but they will always be made of durable leather. The ones that are made of colored mohair string, with a matching cinch, really haven’t been seen since the 1980s, and even then they were only popular in the gaming and trail riding disciplines. The breastcollar will always be connected to the girth ring, and NOT to the small D-rings set into the saddle skirts. This is for two reasons. First, the d-rings are fairly small, and are set into the skirt of the saddle, so they are easy to rip out when too much weight is put on them. The girth rings are much more substantial, and they hold a lot more weight. Second, the d-rings are usually set quite high on the saddle, and up closer to the horse’s withers, which isn’t the right angle to hold the breastcollar down where it needs to be for roping: across the horse’s chest. 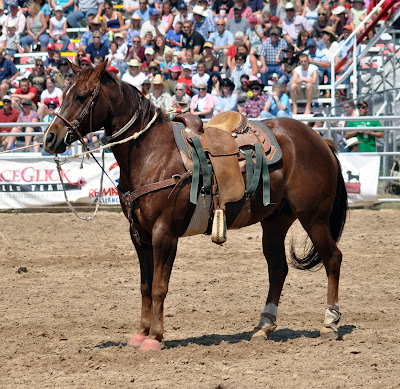 One of the horse’s in Jenn’s photos has a 2-point breastcollar. While these are not completely out of place in tie-down roping, they are much more commonly seen in team and steer roping where the horse will be doing a harder turn and more pulling. 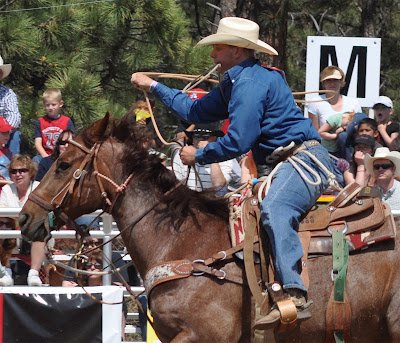 Accessories
Cowboys never want to take the chance that their expensive roping horse could be hurt, so leg protection is a must on a roping horse! The actual type of protection used varies by both rider and horse, but the ones most commonly seen are splint boots on the front... 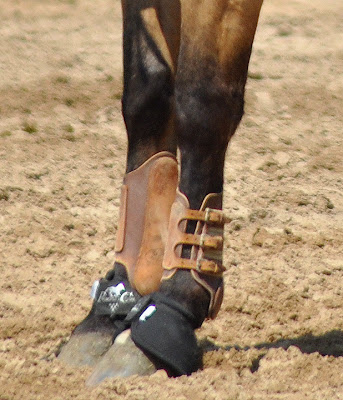 and skid boots on the rear. 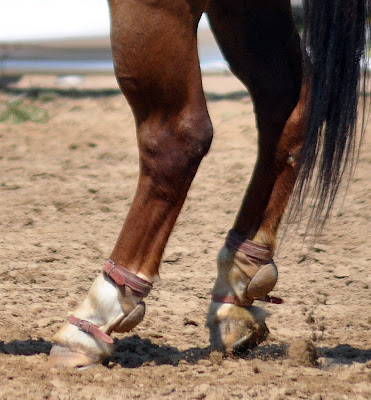 The boots can be either the traditional leather... 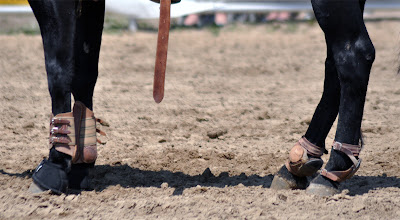 or the modern sports medicine/neoprene. 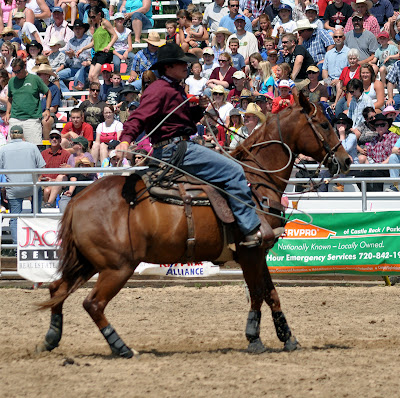 Some riders use bell boots, particularly if their horse is prone to stepping on himself while in the box or while stopping. 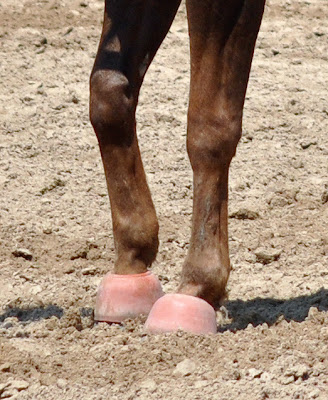 Almost all tie-down roping horses use a tie down. This is not because they are prone to throwing their heads, but rather because it gives them an additional balance point to brace against for that hard stop when the roper catches the calf. Most roping tie downs are made of a wide, flat leather strap, and you will also see ones made from a rope. The tie-down goes under their bridle headstall, or is integrated into the headstall as a noseband. You will occasionally see a roper, even at the top levels, who doesn’t use a tie-down, but this is really not common. Fred Whitfield, multi-year NFR qualifier, and World Champ tie-down roper, has had several horses that did not use a tie down. Most cowboys do not want to take the chance that anything will go wrong with their run, so they use a tie-down! 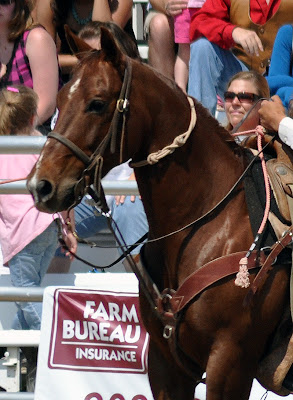 The bridle and bit are again rider’s preference. The headstall can be of any type (one ear, browband, two ear, etc.), but it usually made of leather. Most ropers use an actual shanked curb bit rather than a mechanical hackamore, but you will occasionally see a mechanical hackamore used. The bridle reins are ALWAYS a single roping rein. Remember, the rider has to dismount and run down the rope while the horse backs up, so you want the reins to be on the horse’s back/withers. To use split reins would be dangerous because the horse could step on a trailing rein and injure its mouth. Romal reins are not seen in roping because the tail of the romal would get in the way of holding the rope. The material of the reins is totally rider’s preference. Jennifer's pictures show one made of braided cotton, much like a lead rope, and others made of leather. 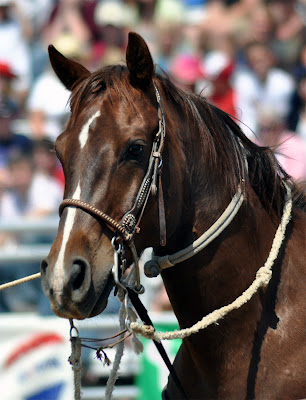 One thing you will NOT see in the real world roping competition is a bosal hackamore! Remember: a bosal hackamore is a TRAINING device for a YOUNG horse under 5 years old. If you are roping off a horse, he should be a “finished” bridle horse and should be long past wearing a bosal! Also, riding with a bosal is supposed to be done with two hands, which would be totally impossible while holding and throwing a rope!
The neck rope is quite simply a piece of rope or leather that fastens loosely (with a buckle or small knot) around the crest of the horse's neck and holds the rope in a straight line after it is thrown. 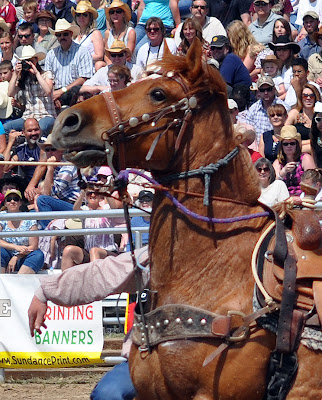 The neck rope is used ONLY in tie-down roping, NEVER in team or steer roping where the heavier steers could break the horse's neck! Some ropers also use a "nose loop" that comes off the tie down behind the bridle headstall and continues holding the rope in a straight line. Anything the cowboy can do to make sure the run goes as well and as quickly as possible, he will do! 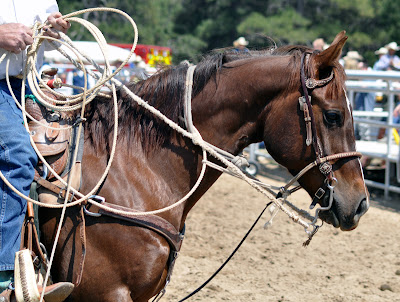 Most professional tie down ropers also use a piece of rope called a jerk line. This is a long piece of thin rope that goes from the shank of the bit, through the neck rope, to the rider's belt, where it is looped under the belt. You can clearly see this in one of Jennifer's pictures. When the rider steps off the horse to run down the rope to the calf, the jerk line uncoils from under his belt ... 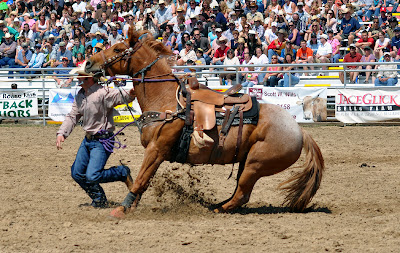 and pulls back on the horse's bit to remind him to back up. 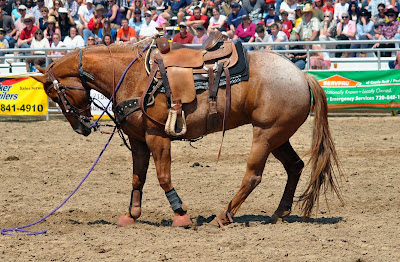 At the end of the run, it will be laying on the ground or dangling over the thrown rope. 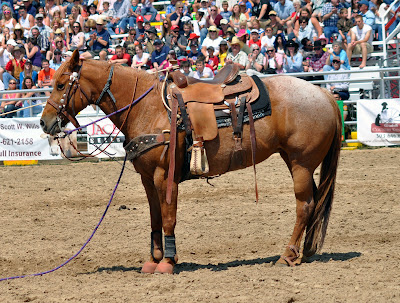 As I've said before, roping horses are smart and know their job very well, but no cowboy wants to take a chance of something bad happening, so the jerk line is added security! Keep in mind that jerk lines are illegal in breed show roping competitions.
So, hopefully now everyone understands the horse, equipment, rider attire and calf used in tie-down roping. Next article, I will examine a tie-down roping step-by-step run from start to finish!
Posted by Braymere at 9:01 AM