Because Teresa has a full time job and I do not, she's been having most of the NAN raffle items shipped to me.  This has been a real treat.  After all, who doesn't like getting packages from some of the hobby's best artists?

Today the mailman brought a box from Melanie Miller.  Mel is on my short list of artists whose work I would love to own but cannot afford.  I didn't remember seeing her name on the list of raffle donors, but it never occurred to me that this was anything but an raffle item.

I took the box inside and opened it carefully, fully expecting to find one a beautifully painted mini or one of Mel's lovely medallians...

I did not expect to find this! 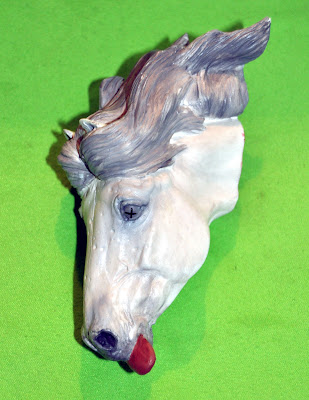 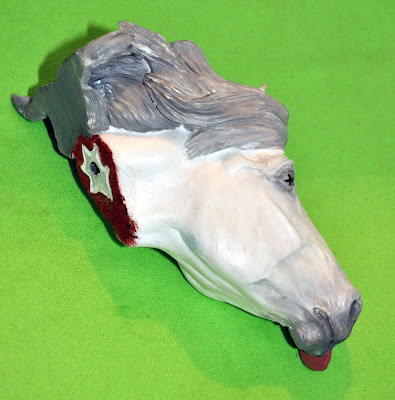 Seriously--What the hell? No one in their right mind is going to buy raffle tickets for this!! 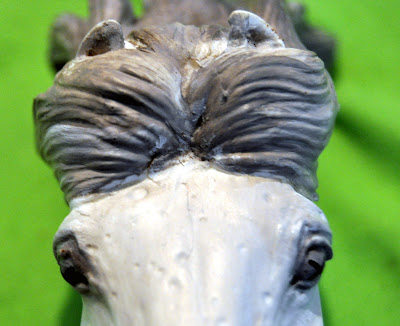 Several minutes passed before it dawned on me that this probably had nothing to do with the raffle.  It was far more likely this was connected to Erin Corbett's Breyerfest order.  I put down the scary head and fired off a couple emails.
A few minutes later, my suspicions were confirmed.  Rather than sending me the list of measurements I'd asked for, Erin and Mel decided it would be better to make a mold of the model's head and send me a copy.  Obviously, they also determined it would be much funnier not to let me know about this in advance.  It's too bad they weren't here to see my reaction when the head arrived.  They probably would have laughed themselves silly! Ok, I have to admit--that was pretty funny!  And you never know, I might just find uses for that head beyond Erin's Breyerfest order.  After all, there is a hobby precedent for performance showing a bodyless head...
Posted by Braymere at 1:47 PM