The one piece of equipment that I haven’t yet explained is the rope itself. While the old-time cowboys used a rope made from braided leather or rawhide,a modern roper’s rope is made from nylon, polyester or another synthetic material. There are many different types of ropes, and they can be many different colors, from pink, to green, to natural. All ropes have a small loop at one end that has a rawhide Honda, or “burner” on the end of it. Feeding the other end through this small loop is how the actual throwing loop is built. Calf roping ropes are 28 feet long, and the end of the rope is tied hard and fast around the roper’s saddle horn. (This is unlike in Team Roping, where the roper must “dally” the rope after making his catch.) If you would like to see more about different types or ropes, I highly recommend Smith Brothers’ website. 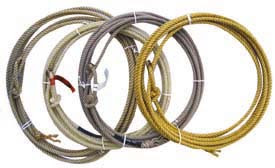 The Run
So now that you understand the equipment, the rider, the calf and the horse, let’s look at a typical roping run and I will give an explanation of each step as it happens. Unfortunately, Jennifer’s photos don’t quite start at the beginning of the run, so let me explain a little bit first.
The roping boxes are always at the opposite end of the rodeo arena from the bucking chutes. There are two boxes, with a chute in between them. The box on the right (as you are facing the boxes from the other end of the arena) is the main box. This one is the one where the roper will set up in Tie Down Roping, where the header sets up in Team Roping, and where the bulldogger sets up in Steer Wrestling. The box on the left is where the hazer sets up in Steer Wrestling, and the heeler in Team Roping. In tie-down roping, this box will most likely be empty. 99% of all tie-down ropers will make their run from the right side of the calf. They will throw their loop with their right hand and dismount from the right.
Across the front of the right box is a very important piece of equipment that consists of a 28-foot lightweight rope and a piece of string: the barrier. The barrier is designed to stretch across the right side of the box and give the calf or steer a ‘head start” in all events that start from the box. In a perfect run, the calf jumps out of the chute, reaches the end of the barrier rope, the rope releases and the roper’s horse jumps out of the box after the calf. If the roper’s horse jumps out of the box too quickly and breaks the piece of string at the end of the barrier, the roper gets a 10-second penalty added to his time. In tie-down roping, 10 seconds is an absolute eternity! So, it is extremely important that the horse leave the box on time and keep the barrier intact!

To give the horse every possible inch of room possible behind the barrier, the roper will back the horse into the far left corner of the back of the box. There is usually a big, vinyl-covered pad on this back wall. It is not unusual at big rodeos for there to be several cowboys standing in the box and watching.  The better roping horses stand quietly in the box, but a lesser roping horse (or even a good one that is a little nervous) may be a little jumpy in the box. The roper will have his rope in his hand, and the piggin’ string (used to tie the calf’s feet once it is on the ground) in his mouth. The whole time, the roper is watching the calf in the chute to see if its head is pointed straight down the arena. Once he is happy with the way the calf is standing, he will nod his head, the chute doors will open, and the calf will come flying out of the chute! The race is on!
Now Jennifer’s pictures begin to tell the story. Unfortunately I can already tell you that there are a few problems with the run. First, the roper and his horse are several strides out of the box, and he is still swinging his rope. This is not a good thing. Most PRCA tie-down ropers catch on their second or third swing, so this roper is still swinging and the clock is running. Secondly, it looks like the calf has run sideways out of the box and is heading towards the stands. Again, anything that eats up time is not a good thing. So, in this first photo, the roper and his horse are chasing the calf, and the roper is swinging his rope. 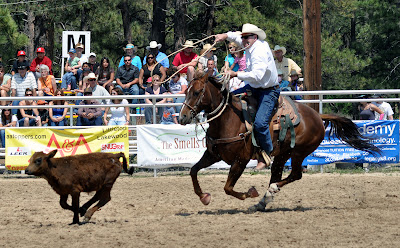 In the second photo, we see the roper has decided to go ahead and throw the loop. You will notice that the horse’s head has turned as he is following the calf. Again, this is not a good thing. The roper wants the calf to run straight. 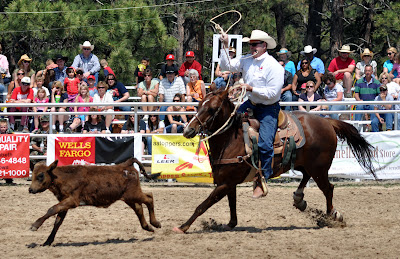 In the third photo, the loop has settled on the calf’s neck, and the horse has straightened out. At this point, most of the pro ropers would jump off, and run to the calf, but this roper is still on the horse. 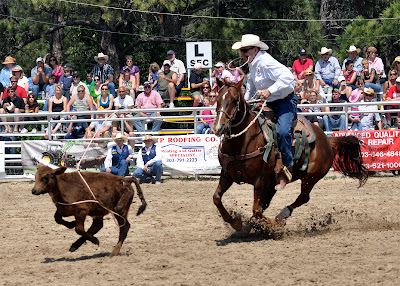 In the next photo, the roper has pulled the slack out of his rope, and the loop is tight on the calf’s neck. The calf feels the loop on his neck and is about to stop running. The roper is still on his horse… 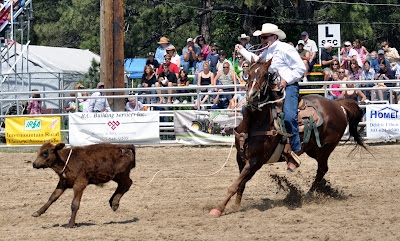 In the fifth photo, the roper has finally gotten off his horse. Oddly, he is not using a jerk line but his horse is doing its job and is stopping quickly. 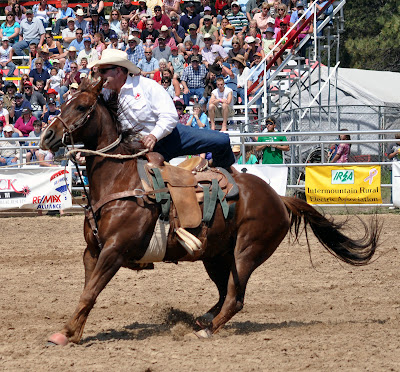 In the sixth photo, our roper is running down the rope towards the calf. The horse is still doing his job keeping the rope taut. Notice how he is balancing on the tie down in both this photo and the previous one. 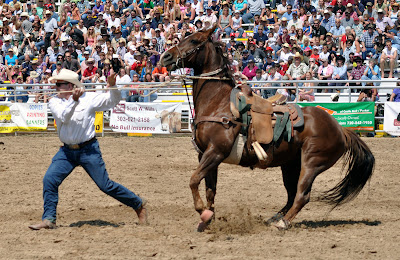 Uh oh. Another bit of bad luck for our roper. When he gets to the end of the rope, the calf is already on the ground. PRCA rules state that the roper cannot tie the calf on the ground; he must get the calf to its feet, flank it and then proceed with the tie. So, in this photo... 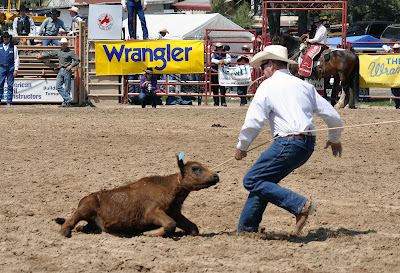 and the next one, the roper gets the calf to its feet. 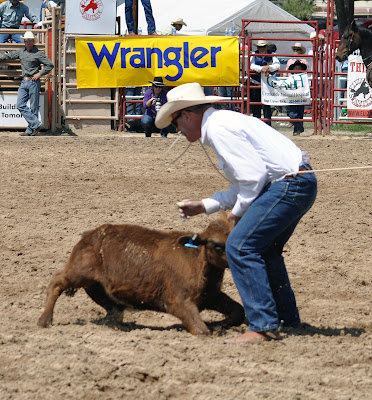 Now, the roper can flank the calf, which he does. Remember, that calf weighs between 220 and 280 lbs. 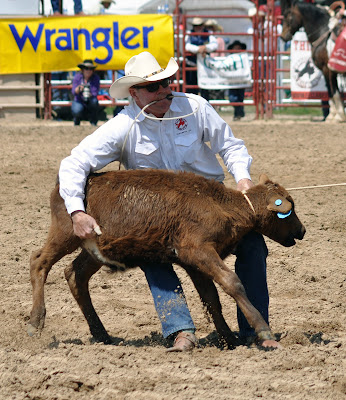 Meanwhile, the horse is standing calmly, swishing his tail and watching the roper. That is his job and he is doing it well. 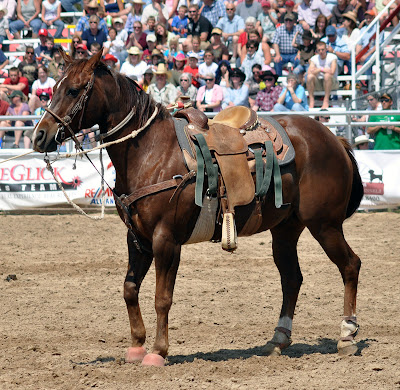 Once the calf has been flanked and is down on the ground, the roper must tie its feet using the pigging string. This pigging string has a small loop in one end, and that loop is placed around one of the four legs. 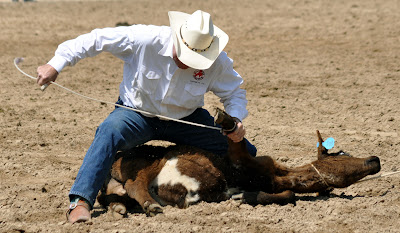 Then the roper grabs the nearest three legs,“stacks” them together... 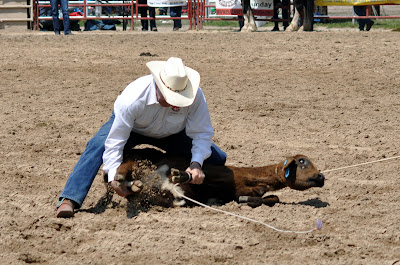 and ties them by wrapping the rope around them twice and tying a quick half hitch knot. This is known as “two wraps and a hooey” by ropers. The roper usually kneels on the calf while tying the legs to keep the calf still, and also to prevent it from getting up and running away! 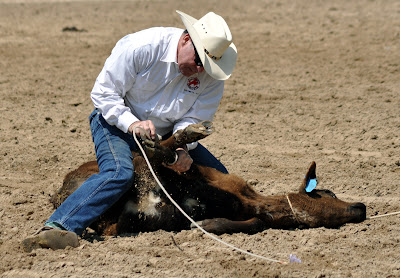 At the end of the run, the roper throws his hands in the air to show the judge that he is done, and the clock stops. 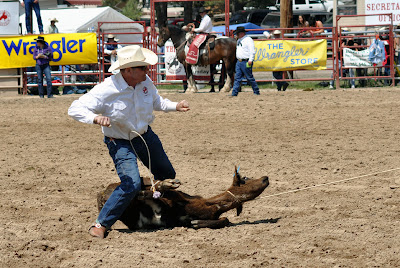 In the next photo, we see our roper back at his horse preparing to remount. Even though the clock has stopped, the run is not yet complete. The rider must remount, walk the horse forward to release the slack in the rope, and wait for 6 seconds to see if the calf stays tied. This can be the most agonizing part of the run! If the calf does manage to kick free, the roper is given a “no time” and is disqualified. Many times, pro ropers will only take two wraps with the pigging string in order to save a fraction of a second, so they will almost run back to the horse and remount quickly so the calf doesn’t have as much time to try to kick free. 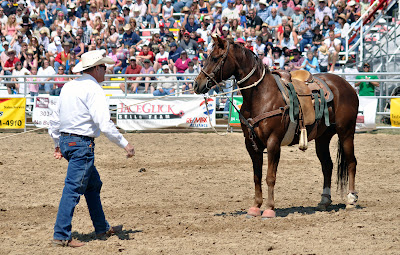 In this photo, we see the calf trying to get up, but thankfully, the calf stays tied, and our roper’s run is finalized.
Now, how quickly did all of this take place? I would estimate that with the points I have shown, this run probably took 10-12 seconds. Unfortunately for our roper, that’s not a very good time. The world record for tie-down roping 5.7 seconds posted by Lee Phillips in 1978 at Assiniboia, Saskatchewan. Amazingly, Lee didn’t even leave the box in this run! The second-fastest run was 6.3 seconds posted by Ricky Canton at Strathmore, Alberta in 2005. As you can see, tie-down roping goes really, really quickly!
So, where can you learn more about tie-down roping? Obviously watching the event in person is the best way to learn. Obviously, not everyone can watch PRCA quality ropers on a regular basis. Even watching amateur ropers is still a good way to familiarize yourself with the event. But if you live in an area with few rodeos, then there are definitely ways to watch roping on TV. The National Finals Rodeo takes place every year in early December in Las Vegas, NV, and is telecast on ESPN. Joe Beaver (first cowboy to earn $1 million roping, and multi-world champion) usually does the roping commentary for the NFR, and he really gives excellent insight! Throughout the year, there will be other national rodeos on TV, too. Although their commentary may not be as good as Joe Beaver, there is still a lot to be learned from watching roping over and over again. And if you’re ever in Fort Worth, Texas, give me a shout and we’ll find some roping to watch!
Thank you again, Christie!  I know I'm not the only one who has hugely enjoyed this series!!
Posted by Braymere at 10:23 AM