As is often the case, there wasn't an official dress code for horses competing at the Arapahoe Hunt's 2011 Point to Point.  In fact, there was no mention of tack anywhere in the prize list.
Of course, even when there aren't specific rules, there's almost always some obvious trends.  Most of the horses belonging to hunt members were dressed like this.  In particular, note the saddle with knee rolls, breastplate and bridle with flat brow and nosebands. 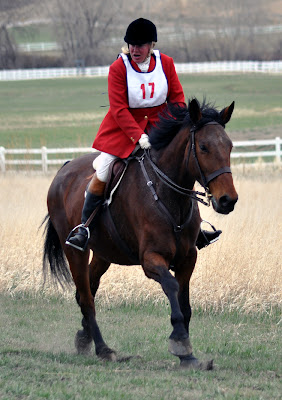 Because the Point to Point was open to the public, there were also a lot of show horses and event horses in attendance.  I can't be certain, but I'm willing to bet this guy came from one of those groups. 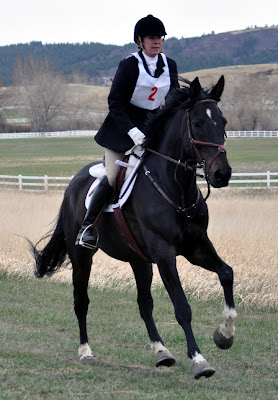 I was really pleased to see some old style saddles with suede padded flaps.  After all, I learned to ride in a saddle like this! 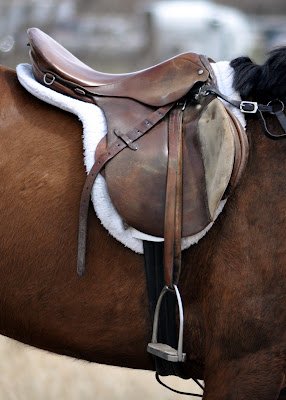 This one even has a cord girth--I haven't seen one of those in a long time! 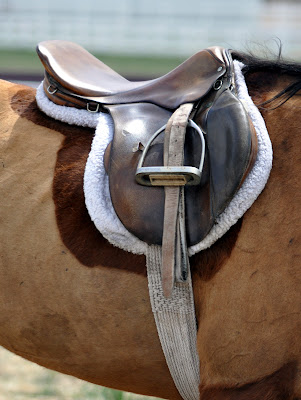 Of course, there were some modern type saddles, too.  This one is an all purpose style... 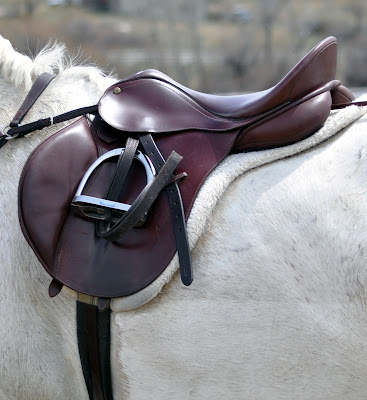 and this would look right at home at any hunter show! 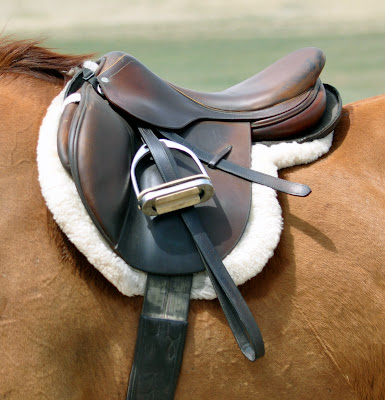 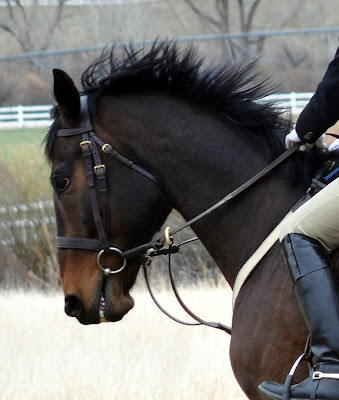 but there were more than a couple standing martingales. 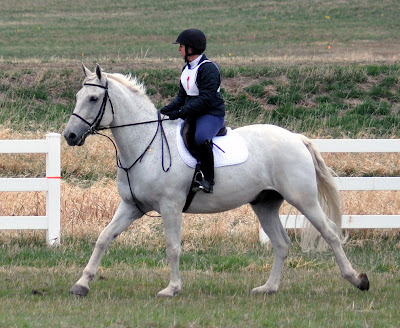 Most of the horses competed with bare legs, but some--like this Swedish Warmblood--wore boots all the way around. 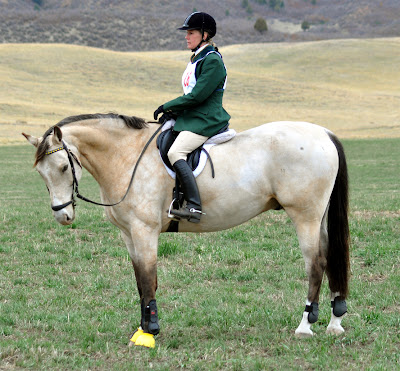 Onto bridles!  Here's a look at the typical hunt bridle. 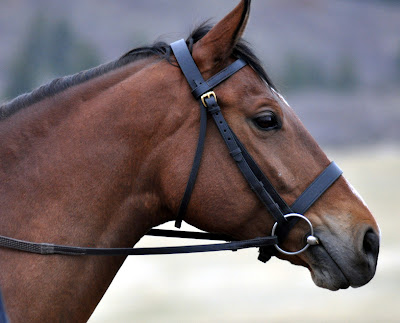 And again.  This one has a pelham bit.  There were a lot of pelhams at the Point to Point. 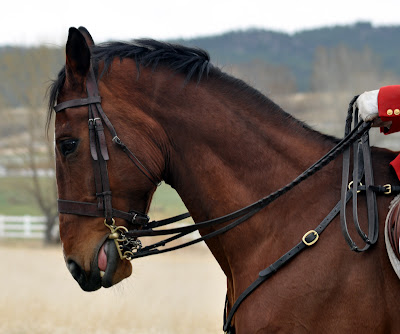 Of course, not everyone was sporting that flat browband, flat noseband, gold toned hardware look!  There a lot of "normal" bridles there, too. 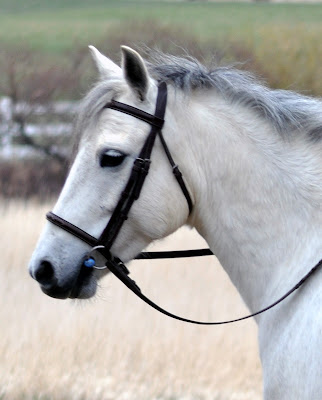 In addition to snaffles and pelhams, there were also a large number of horses wearing kimberwickes. 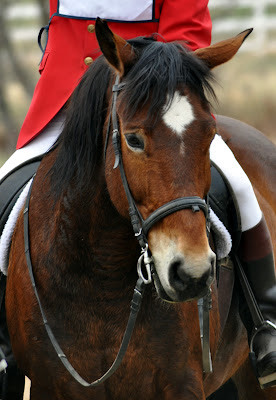 Bit converters on a kimberwicke?  I'm not sure I see the point... 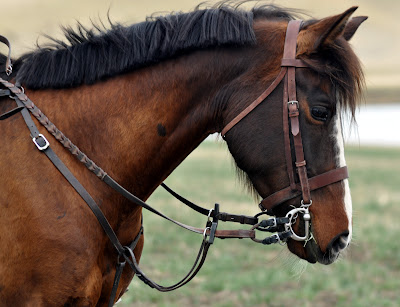 Only a few horses fell outside the snaffle/pelham/kimberwicke spectrum.  Those included this grey with his three ring elevator bit, 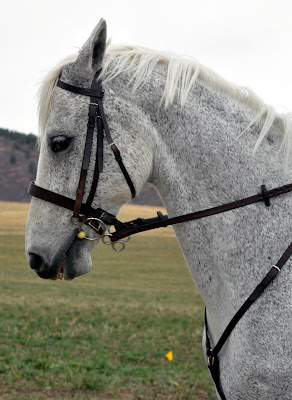 a palomino pinto with a hackamore, 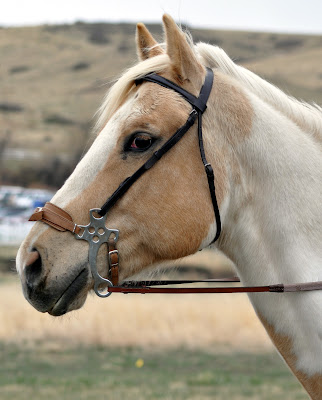 and this chestnut with his combination hackamore bit. 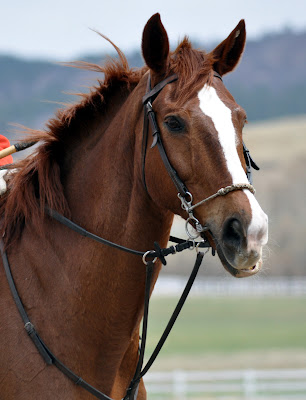 While plain cavesons (either flat or raised) were the most popular noseband choice, there were several horses with figure eight nosebands or flash attachments. 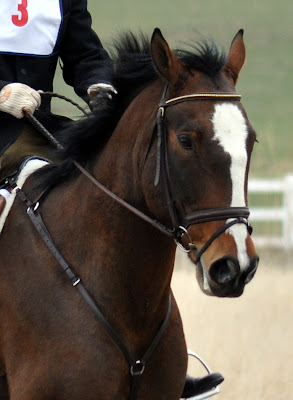 There were even a couple horses without any nosebands at all. 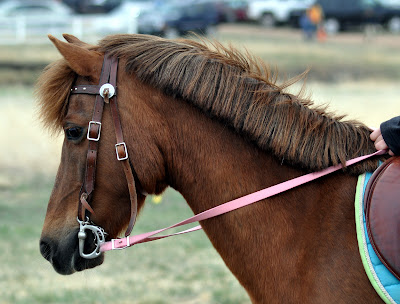 And then there was this guy...  I can't be certain, but that sure looks like a regular caveson put on upside down! 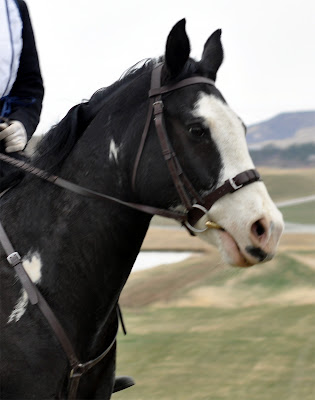 I'm almost done with the Point to Point photos now.  There will be just one more post on this topic and that one is still several days away!
Posted by Braymere at 3:39 PM