Ghosts of projects past

Two things I love are bargains and projects.  When you combine the two, it's almost impossible for me to resist.
That said, it's no surprise that I'm sorely tempted each and every time Kirsteen Haley lists a "you finish it" saddle on Model Horse $ales Pages.  Like Erin and Shannon, Kirsteen is one of the hobby's top Western saddle makers.  Her carving skills are undeniable, and it's a wonder that I've only succumbed to temptation twice.
Unfortunately, I'm a lot better at starting project than I am at finishing them.  Neither of those saddles have changed much since I bought them--at least not until today. 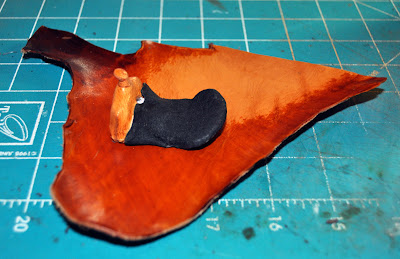 I wish I had thought to take a picture of the saddle pieces when I started.  Although beautifully tooled, the dye job left a lot to be desired.  It was a weird blotchy orange shade.  After a few attempts at fixing it, I decided it would be easier to dye everything dark brown.  I also abandoned the lumpy, handmade tree in favor of a customized Rio Rondo version. 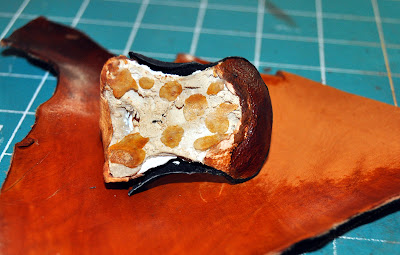 Several hours later, I have this to show for my efforts. 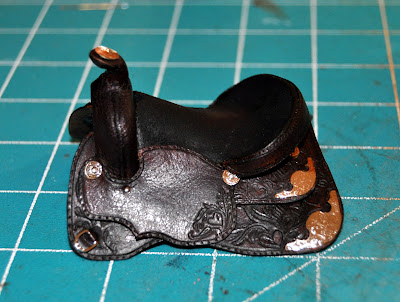 It's not finished, but at least it looks like a saddle! 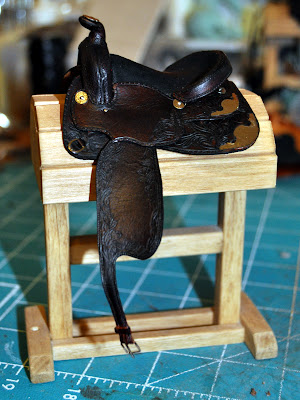 I've ordered some silver plated stirrups from The World of Model Horse Collecting so further progress is on hold until they arrive.  Still, I'm feeling pretty confident that this particular project is finally coming to fruition.  Hurray!  One down, one hundred ninety nine to go!
Posted by Braymere at 6:15 PM