Rocky Mountain Rendezvous is just eight days away and I am slowly but surely preparing my entries for the performance division. One of my many projects has been adapting my old endurance set to fit my mule, Emma. She needed a longer crupper, a shorter breastplate and an entirely new bridle. I finished the tack earlier today and then had another dress-up session, this time with my Jane Schneider endurance doll. 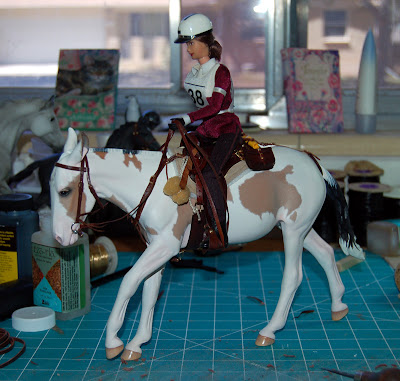 Although I was generally pleased with the way everything looked, I couldn't shake the feeling that something was missing. It wasn't bad, just kind of... boring.

Most people who show their models in Endurance Riding use a diorama but I don't have time (or inclination) to build something like that. I needed another alternative, so I spent some time googling pictures of real endurance horses. That's when it occurred to me that I could quickly and easily adapt a prop I already had to be a perfect Endurance Riding finish line.

I built this shower curtain trail prop in 2007. 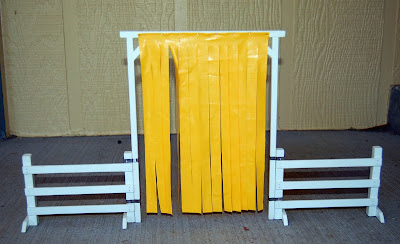 Like all my homemade props, it disassembles for easy transportation and storage. 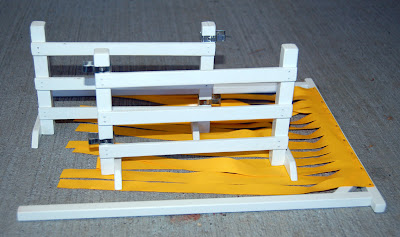 The "new" prop pairs those old fence pieces with an entirely new arch. 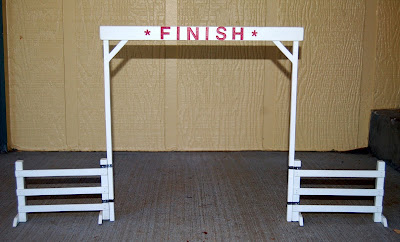 And just like that, Emma's Endurance Riding entry has become a lot more interesting. Instead of quietly loping across the table, she's now a fierce competitor heading for the finish line! 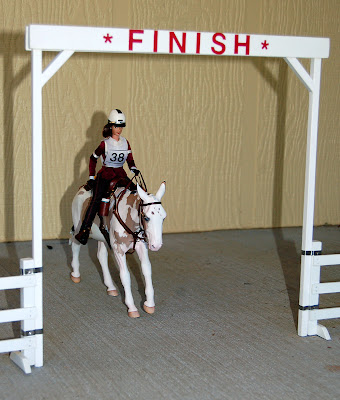 When I actually set this on the show table there will probably be an event official with a notebook and a radio standing by the finish line. There may even be a small crowd of onlookers cheering Emma on. It may not win the class, but at least it won't be boring!
Posted by Braymere at 1:43 PM