As it turned out, Teresa and I were the only people showing performance at the Rocky Mountain Rendezvous live show. This might lead you to believe that we enjoyed a leisurely stroll through the classlist. Nothing could be further from the truth. Instead, this became an exercise in speed tacking. There were seventeen classes in the division and I competed in all but one of them. In twelve of those classes, I showed two models. Somehow, we managed to finish the division before lunch time. It was tack one, tack the other, put both on the table, take them off the table and start all over. I barely had time to breathe let alone think!
Harness was first and White Trash Girl was the only entrant. Not surprisingly, she won the blue! 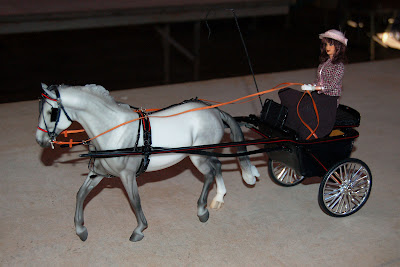 I skipped the Arabian/Native American Costume class so Parade was next. I really liked the way Trashy's Street Parade entry turned out... 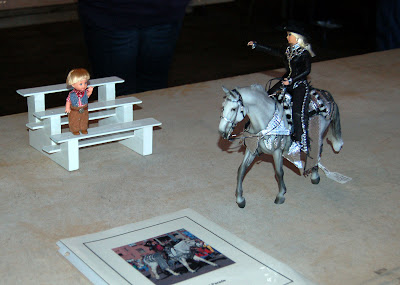 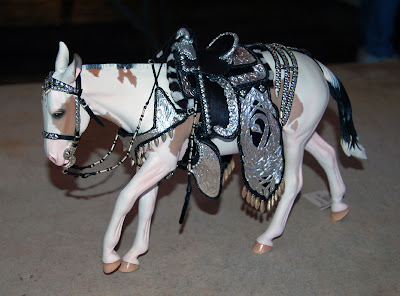 Trashy earned another second place with this Other Performance entry. 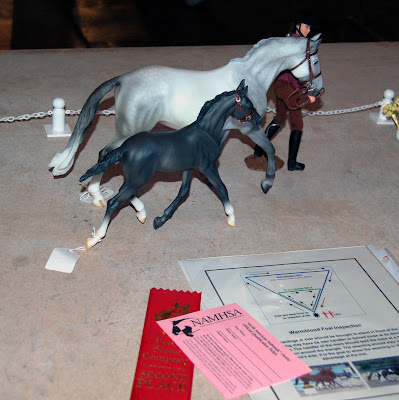 Emma won the Other Performance class with her Endurance entry. 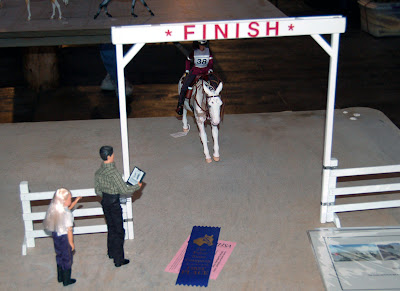 Two blues were good enough to earn Emma the title of Other Performance Reserve Champion. 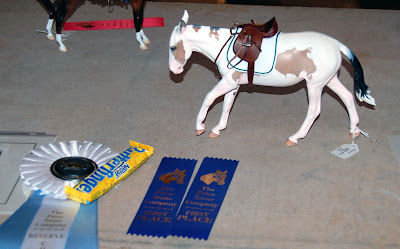 Trashy won the Scene class with this school horse set-up and went on to be named Other Performance Champion. 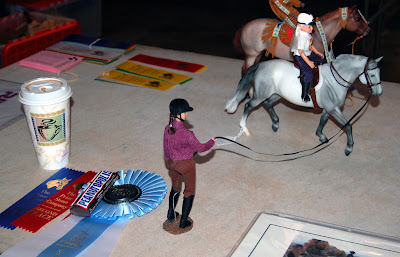 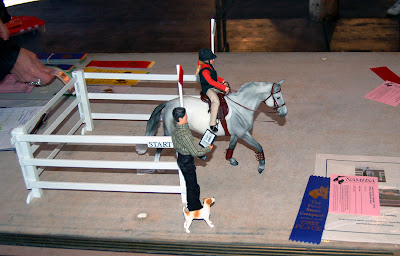 Poor Emma was plagued with boot issues. The show hall was cold and nothing wanted to stick. Bits fell out of mouths, reins fell out of hands and the closures on Emma's boots wouldn't stay closed. Oh well. Live and learn. Next year I will bring only buckle boots to RMR. 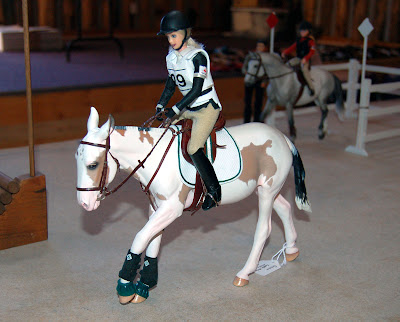 The next class was Hunter/Jumper, and once again Trashy claimed the top spot. 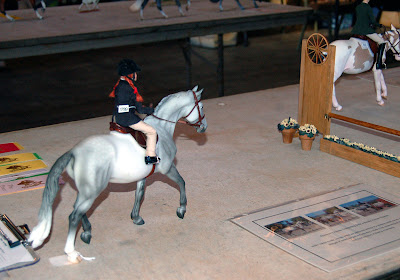 Emma was third out of three, but don't feel sorry for her. 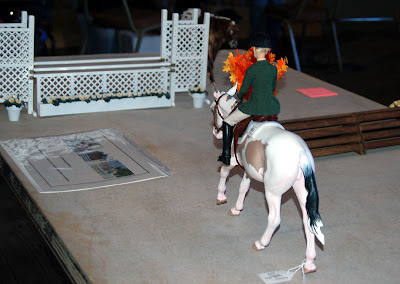 She came back strong to win three of the next four classes including the Other English... 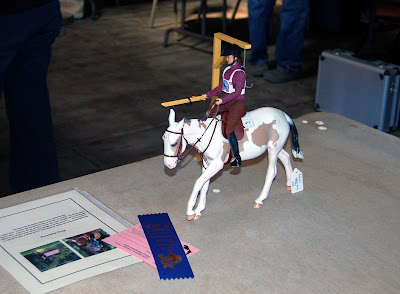 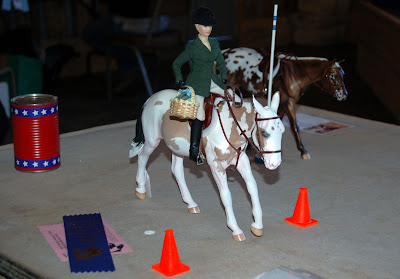 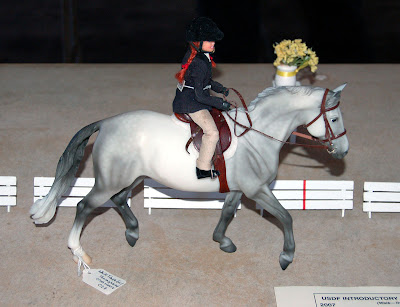 And Emma was the class winner. 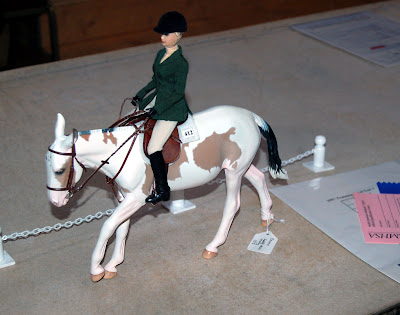 Trashy and her ribbons on the callback table. It's a pretty nice haul, but not quite nice enough! 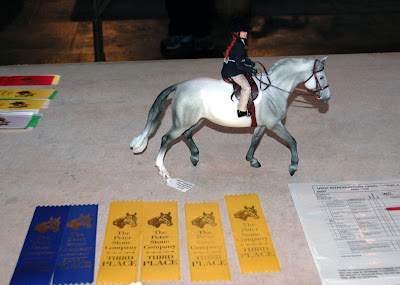 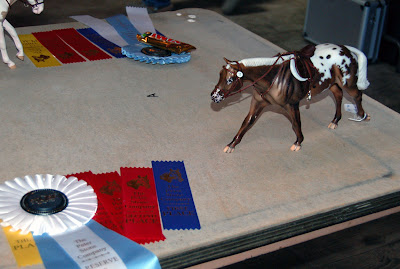 and Emma was the English Champion. 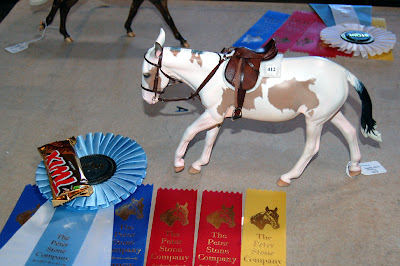 I was really tired by the time the Western division rolled around, and I all but stopped taking pictures. You can see both my trail entries here. I'm not positive, but I think Emma's pole entry placed second and Trashy's cowboy curtain was third. 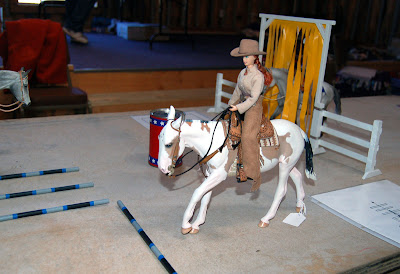 Trashy tried, but it just wasn't her day as far as Western performance goes. Fortunately, that one red ribbon was all she needed. She's now qualified to show in all three performance divisions at NAN 2011. 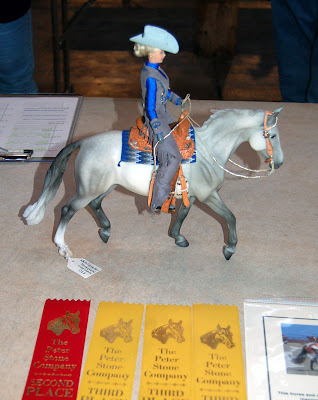 Emma, on the other hand, is a performance machine. This mold looks great under saddle and is so easy to set up in a variety of events. If you're looking for an all around performance contender, you can't go wrong with a Jasmine resin. Emma won another rosette in the Western division and was named Overall Performance Champion. 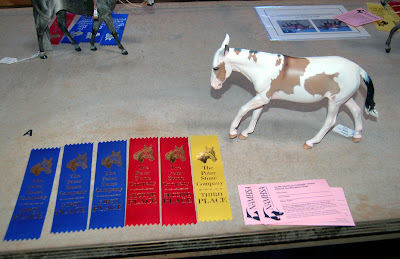 Although I look a bit dazed and confused in the picture, I was really happy to win a glossy trophy model. 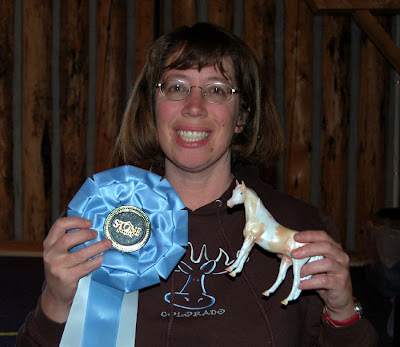