I read a lot of horse related blogs and one of my favorites is Tacky Tack of the Day. Fellow model horse hobbyist, Jessica McCune is the author, and I am constantly amazed by the sheer awfulness of some of the things she features there. Who knew you could buy an all pink English saddle or horse boot covers with fringe or a Western saddle with a zebra patterned seat? Today's Tacky Tack entry was all words, so I'm I thought I'd post a couple "tacky" pictures of my own for anyone who might be going through withdrawals.

There is absolutely nothing wrong with this nice Stubben saddle. Its brown color and plain flap are both unusual features in a dressage type saddle, but you can tell at a glance that it's a well made piece of tack. However, it's almost hard to see anything but that shocking pink pad and those equally bright stirrups! 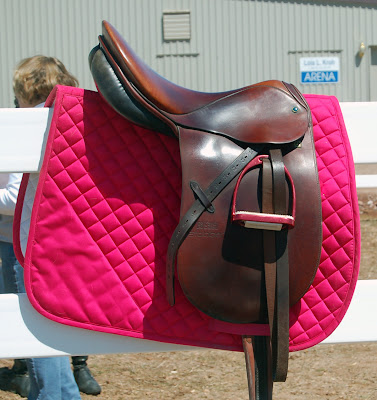 Of course if you're going to put that much pink around the saddle, you must be sure to balance it out with a pink tail bow and sparkly body paint. 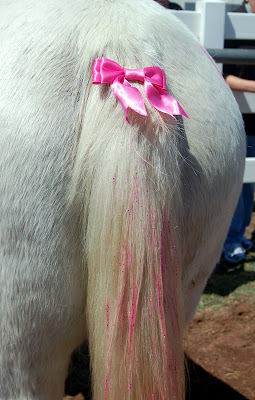 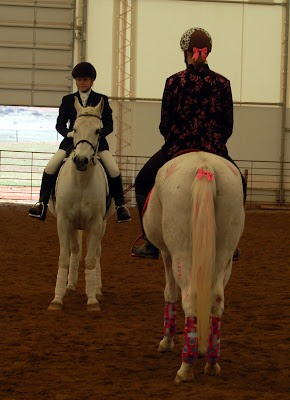 This explosion of pink was part of a comical skit performed yesterday at the Equine-aganza by sisters Alyssa and Whitney Hayes. They rode Trisha's brother and sister Arabs to the song "I Can Do Anything You Can Do Better," and their act was all about sibling rivalry. Naturally, this did not end well. The grand finale was an "Around the World" contest. Hmmmm... That's not something you usually see during a dressage pas de deux! 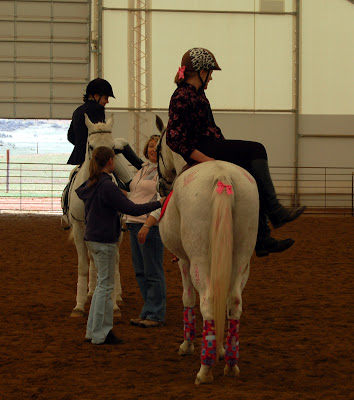 Having shown you the unconventional (i.e. pink) half of this duo, I feel compelled to post this picture of the "good twin." Amie Phoenix may be twenty six years old, but you wouldn't know it by looking at him. What a lovely, classic picture he makes in his good show tack! 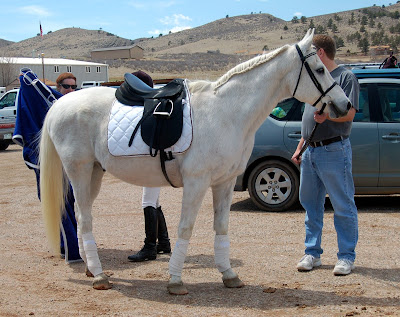 There's a link to the Tacky Tack blog on my Recommended Reading list on the right side of your screen. Be sure to check it out--I guarantee you will be amazed by some of the things people have lurking in their tack rooms!
Posted by Braymere at 1:37 PM