Today is my oldest son's ninth birthday. It hardly seems possible, but my little boy isn't so little anymore. He no longer wants me to kiss him or hold his hand, he doesn't believe in Santa Claus or the Easter Bunny and he's prone to rolling his eyes at all my jokes, even the funny ones. His number one birthday wish was for an MP3 player, and when he received one this morning, he told me it was "tight". There's no denying it--Ryan is growing up.

Thankfully, however, traces of his younger self remain. One example of this is his enduring interest in bedtime stories. I always hoped my children would inherit my love of books, and toward that end I've spent untold hours reading them books calculated to hold their interest--stories about trains, dinosaurs, robots and planets. Even now when both boys are more than capable of reading to themselves, they still want me to read to them every night.

Mostly I like this bedtime ritual, but there are some nights when I am tired and crabby, and I just want the kids to go straight to bed. This happened recently. I tried to convince the boys that they could read to themselves, but Ryan wasn't buying it. He absolutely insisted I read him a book.

"Fine," I said. "If you want a book, then you're going to get a horse book." I marched downstairs and returned with one of my own childhood favorites, Irene Brady's Doodlebug. 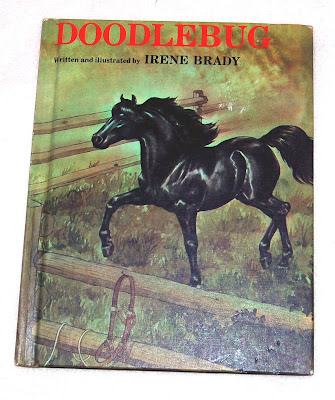 Predictably, Ryan rolled his eyes at the sight of it. I ignored him and started reading. Within a few pages, I forgot I was crabby. I hadn't read Doodlebug in years and I was delighted to discover that it was as good as I remembered. My kids were equally enthralled. They listened quietly to the entire book and even wanted to discuss it after. 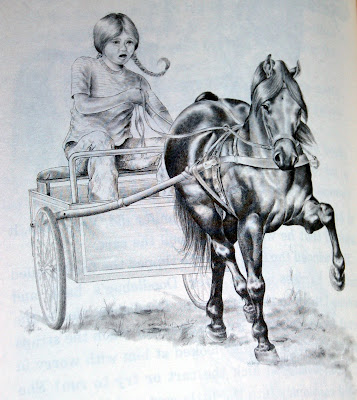 Of course, Ryan will not actually admit that he liked my horse book. He is way too cool for that, and he continues to roll his eyes every time I suggest we choose a book from my bookcase rather than his. Still, he has listened attentively to every horsey selection and has begun to express an inerest in riding with me. I can't believe I didn't think of this sooner! 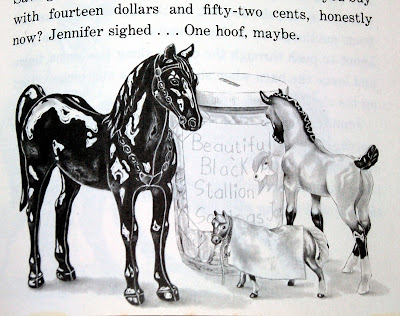 I don't know how long it will be until Ryan decides he's too old for bedtime stories. I suspect that day is coming soon, but I'm glad it's not here yet--I still have a whole shelf full of horse books to read to him!
Posted by Braymere at 1:40 PM