I have made a grand total of one Arabian costume. It turned out fine and I kind of enjoyed making it, but I have no immediate plans to make another. Still, I'm not ruling anything out, so I was delighted to get some good, close-up reference pictures of Trisha's imported Syrian costume at the Equine-aganza last weekend. This is a lovely costume made in a traditional style with modern materials. It is shown here on Trisha's twenty six year old Arabian gelding, Phoenix. 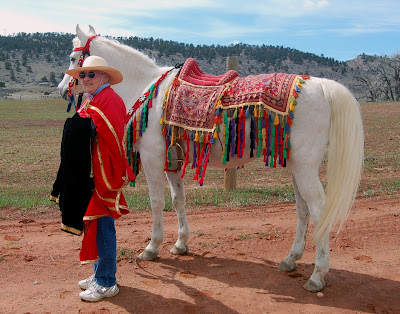 Here's a better look at the bridle. Although you can't see it here, the bit attaches to the headstall via a leather strap and buckle. Phoenix has never had a lot of go in him, so this loose ring snaffle is all the bit he needs. 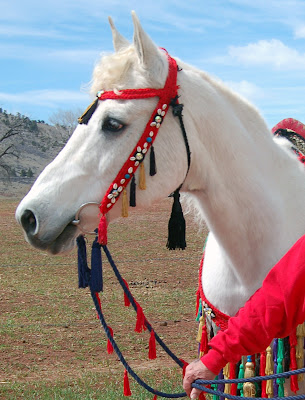 Close up of the browband decoration. The tassels here and throughout the entire costume are made of a synthetic material. 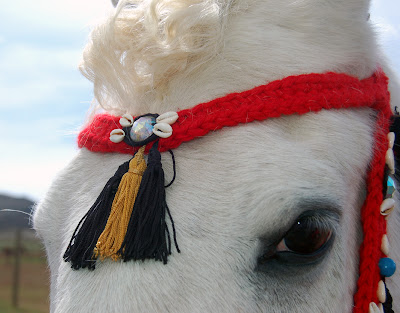 The bridle and breastcollar are decorated with cowrie shell and crystal medallions. The breastcollar fits very low on Phoenix's chest and has a center strap that goes between his legs and attaches to the girth. 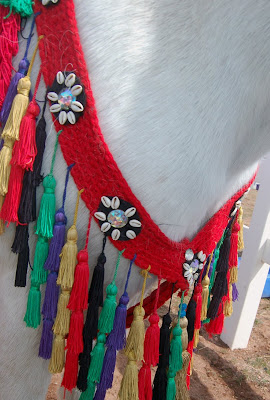 A better look at the medallions and tassels. 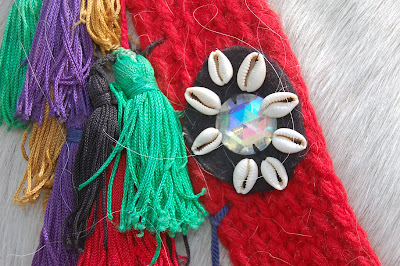 The breastcollar is tied onto the rings on the front of the saddle. 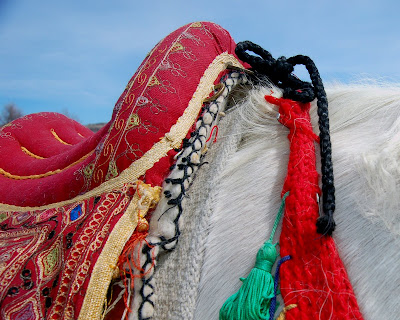 Here's a good look at the entire body part of the costume. Note how much bigger the back panel is than either of the side panels. The stirrups are regular English irons. 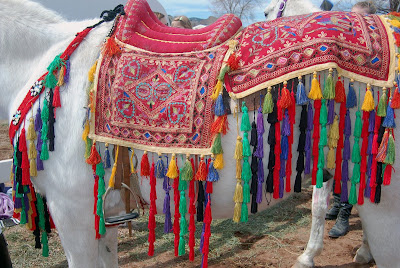 The saddle is higher in front than in back. Despite the padding, Trisha says it is not comfy! 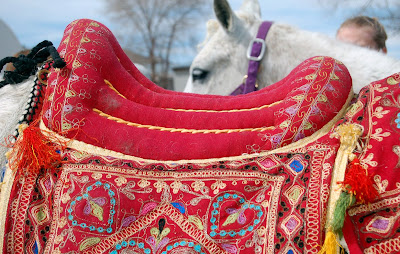 Detail of the embroidered side panel. Most hobby costume makers use the little Turkish rugs and runners for the panels, but there are a few people who actually stitch their own. I would love to learn how to do that. It makes for a much more authentic look. 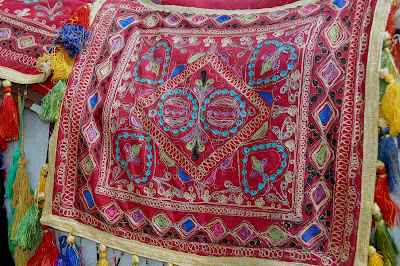 This picture shows Trish cinching up the saddle. The panel and stirrup are flipped up over the seat, exposing a rigging that looks very much like that of a Western saddle. Trish was happy to point out that the latigo is not original. In fact, it is made from an old seat belt! Oh well, whatever works, right? 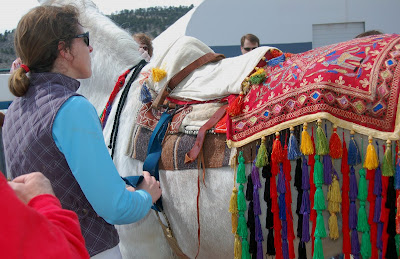 As more and more hobbyists are using dolls in the showring, I think it's important to include at least one picture of someone actually sitting in the tack. It's not enough to make tack that fits your model, it's got to fit those pesky dolls, too! 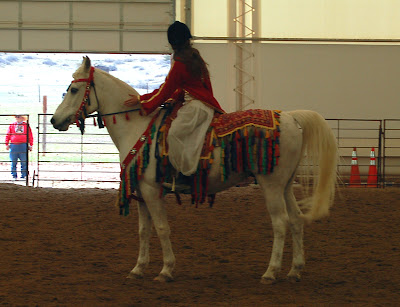 I will upload pictures of some "Hollywood" style Arab costumes over the weekend. Prepare yourself for big tassels and lots of glitter!
Posted by Braymere at 8:55 AM