Yesterday's saddle needs a bridle, so Newsworthy is still jumping across my workspace. To be honest, I enjoy seeing him there and I'm in no hurry to have him rejoin the rest of the herd in the basement. He reminds me of all the wise little white ponies you see at hunter shows safely packing their children around the ring.

Today's post is about one of those little white ponies. Unfortunately, I can no longer remember Little C's registered name. By the time I met him he was over forty years old and well past the point of needing anything but a barn name. Little C's story was a common one. He'd been a fancy show pony in his youth and middle age. Eventually he was retired from the showring and became a school horse. When he was too old for that, he was given to my bosses as a pet for their three year old son. 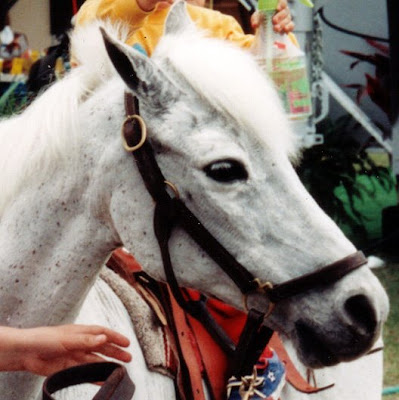 Forty is really old for a pony. Little C's health was mostly quite good with one major exception--he had almost no teeth. Because of this, he unable to eat normal horse food and lived on a soupy mixture of soaked hay pellets. Despite everyone's best efforts, it was extremely hard to keep weight on him. He was bright, alert and interested just very, very skinny. 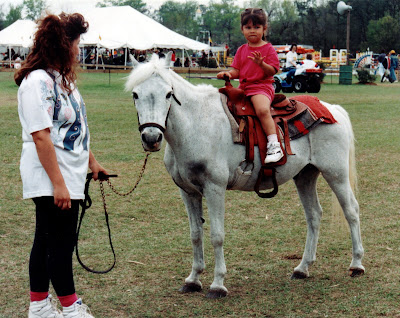 Like so much of the horse show world, my bosses and I spent most of each winter in Florida, vending and showing on the Ocala HITS circuit. In 1994 Little C came with us. Most afternoons he'd be saddled up and go for a little walk around the showgrounds, usually with one or two small children on board. 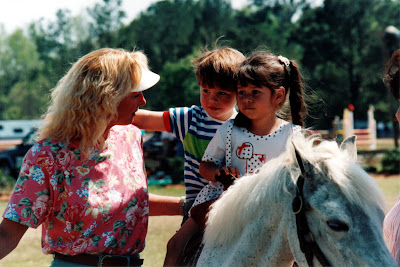 Little C got a lot of attention on these walks. People would come up and pet him and ask how old he was. He seemed to remind everyone of a beloved old pony from their own past. Every now and then someone would even remember him from his showing days! Little C may not have stepped foot into the showring, but he was still one of the stars of the 1994 HITS circuit. 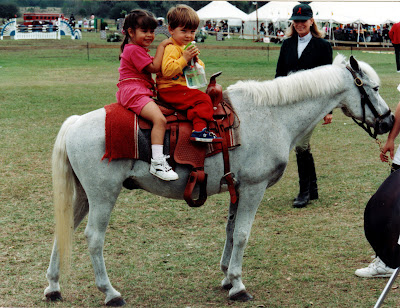 Please note, I hesitated to post these pictures because I really don't want to see them turn up on Fugly Horse of the Day! Yes, the pony is skinny, his saddle isn't fitted particularly well and the kids aren't wearing helmets. I understand all that. Still, I honestly believe Little C enjoyed his last show circuit so if you do feel the need to forward these pictures to Cathy, please send her a link to the entire post so that the pictures can be viewed in context!
Posted by Braymere at 7:41 AM