Remember when I said that participating in these photo challenges was like live show performance showing at home? I wasn't talking about tacking up models or using a lot of complicated props. Instead I was referring to the act of telling a complete and specific story with model horses.

For example, today's prompt for the May Shelter & Share Photo Challenge was "Pony parade." I selected three cantering ponies and arranged them in size order on my table. 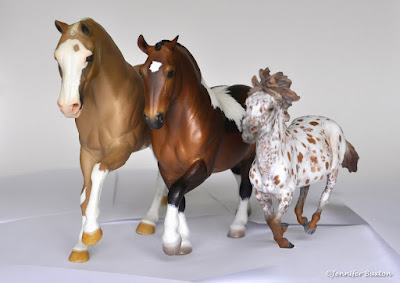 It was a literal parade of ponies. 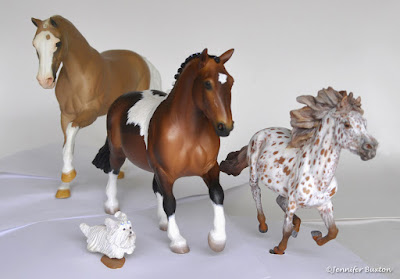 It was also kind of underwhelming. This is a classic example of a "correct with no degree of difficulty" entry. It's fine. It meets the requirements of the prompt, but it's not memorable. 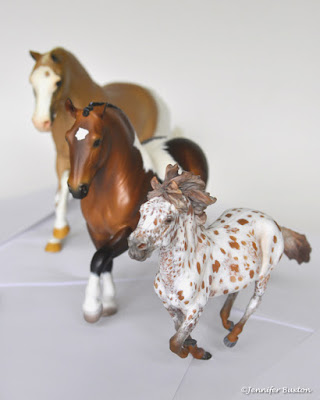 I rearranged the ponies several times. I added and subtracted a dog. None of it made a lot of difference. Clearly, I needed to start over. I ditched two of the ponies and added a doll. This was better, but it was still missing something. 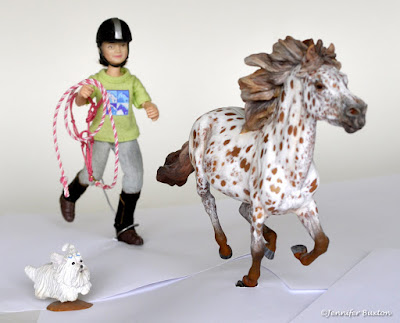 So it was back to the drawing board one more time. I searched my studio for the missing ingredient. I came up with a few possibilities, none of them terribly exciting. Then my stomach grumbled, reminding me that I'd worked past my usual lunch time. Just like that, the whole thing came together. 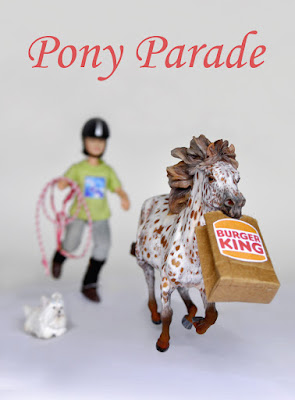 A lot of performance showers get stuck in the "correct but no degree of difficulty" stage. This used to be good enough to win, and still is at some shows. However, it's not nearly enough at big, national level shows like the Jennifer Show or BreyerFest Open. If you want to be competitive at that level, you need to be willing to abandon your old, safe entries. It doesn't matter if you won a NAN Champion with that exact set-up in 2008. Performance showing has grown in leaps and bounds since then. If you're no longer placing as well as you'd like to, don't just keep rearranging the pieces. I know it's harder, but sometimes you need to start over.
Posted by Braymere at 4:01 PM