I was chatting with Christie Richardson yesterday, and she brought up online judging clinics. I immediately sent her three Hunter Under Saddle pictures I'd taken years ago for a post I'd never written.

Almost right away, people started jumping in and critiquing the photos. Nearly everyone placed the class correctly, but they did so entirely on the basis of tack and turnout. There was almost no mention of the horses themselves.

This is a significant disconnect from the way I approach judging. With the possible exception of some costume classes, a performance class should be judged on the horse and its performance first. I don't even look at the tack or props until I've asked - and answered - these three questions: Does this horse look like he belongs in this class? Is he doing what he's supposed to be doing? Is he doing it well?

To ignore these questions is to assume that all the horses are equally suited for the depicted event, and there are no differences in the quality of their performance. In a class filled with nothing but True Norths, this might be the case. However, most classes contain a variety of molds, and they do not start out equal. Some are always going to be better than others.

In this case, all three of the horses are types you would expect to see in a hunter under saddle class. Each is standing a little off square with its necks level or slightly above level. Despite that, there are differences in their performance. Here's how I would break down this class in regards to horse suitability and performance. 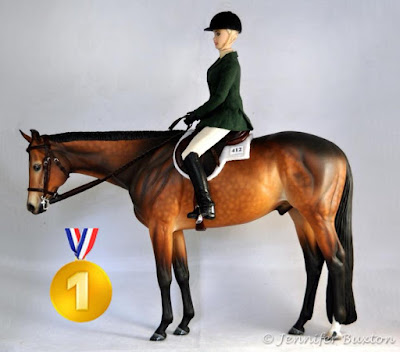 This big guy is clearly showing in an AQHA Hunter Under Saddle class, and his headset is appropriate for that division: long and low with the head just in front of the vertical. One of his ears is cocked back liked he's listening to his rider. He looks focused, attentive and ready to respond to his rider's aids. 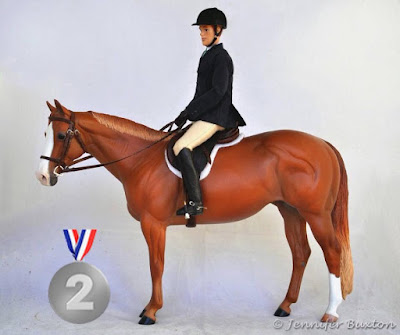 The chestnut mare is standing nicely with her head in a natural, relaxed position. She has a very pleasant look about her, but she is not as attentive or ready as the gelding. Her performance is fine, but not exceptional. 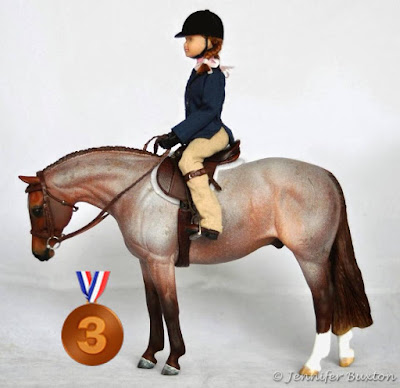 I really like this pony, but he is not as performance suitable as the bigger horses. He's leaning forward, and his weight is centered over his forehand instead of being equally supported by all four legs. His neck is arched, but not in an "on the bit" kind of way. None of this is surprising. The sculpture from which this resin was created is not of a ridden pony, but a pony that is stretching forward to take a treat from a child's hand. Seen in that light, everything works. Under saddle, he's a bit of a challenge.

After I've evaluated the horses, I move on to tack and props (including dolls). At this stage, I'm focusing on fit and function. Quality factors in because it affects both of these things. However, I'm not specifically looking at how pretty - or trendy - the tack is.

Here's how I would analyze this class in regards to tack and props.

Once again, the bay horse is first. All three of the horses in this class are wearing legal and appropriate tack, but this one's tack fits the best. In a perfect world, I would like to see a little more length of rein, but this horse's neck is really long. Allowances have to be made. The doll's equitation is fine. On my scorecard, everything gets positive scores. 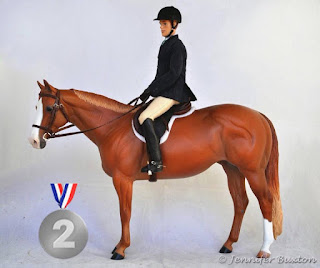 There are some bridle issues here. The browband is a little small for the model and that has pulled the buckles on the cheekpiece dangerously close to the eye. Additionally, the noseband is a scootch low. None of is terrible, but it all could be better. I'd probably give this a zero. It meets the requirements, but does nothing more. The saddle is fine, the reins are loose, but not terribly so. A lot of the Facebook commenters took issue with the doll, but I think he's fine, too. Yes, his heels could be lower, and I'd definitely like to see his entire leg pushed more firmly against the saddle. However, I'm realistic about doll equitation, particularly in classes where the equitation isn't judged. He's sitting up correctly, the knee angle is right and his lower leg is positioned nicely alongside the girth. Of course it could be better, but really, this is fine. 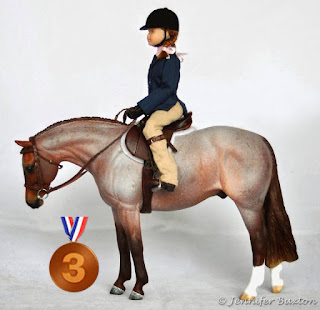 What's not fine is the placement of the pony's saddle. It is much too far forward. This is going to get a negative score. The bridle fit is within minimum requirements. All the straps are touching the pony's head, and the bit is in the right place. Still, it's messy. This is a very old bridle, and it's made from stiffer lace than I use now. You can feel that stiffness in this picture. It just doesn't drape as nicely on the model's head as the other two. The reins have the same problem. They're stiff and messy and not draping properly. The doll is sitting well enough, but the saddle flaps are too long for her very short thighs. Other than saddle placement, nothing in this entry is terrible, but none of it is great either. This one clearly goes to the bottom of the pack.

If this was an actual show, I'd put the ribbons down and call it good. The placings are very clear, and I wouldn't have to consider the next level of evaluation. That's kind of a shame, because as far as I'm concerned, that next level is where things get exciting.

But this post is long enough. I'll save the fun stuff for later.
Posted by Braymere at 2:39 PM