The making of Takeshi

Kylee Parks is one of the most supremely talented artists working in the model horse hobby today, but it makes more than talent to make something as wonderful as the magnificent Takeshi. It takes a lot of time and a whole lot of work. In this guest post, Kylee gives us a glimpse into what it takes to create an Equikoi. 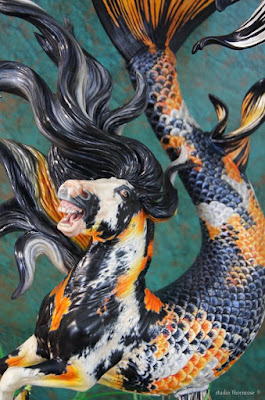 The Making of Takeshi

Takeshi started life as a Desatado Breyer. I cut him in half and built an armature for his fish body with mesh, expanding foam, soda glue and then a layer of apoxie on top. 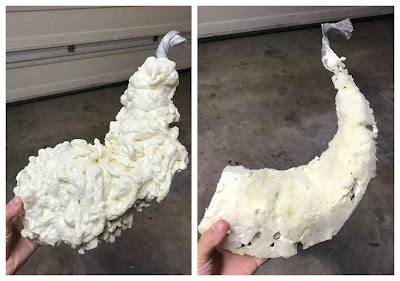 I bent sheet metal around a dowel and attached it the back half of the tail/abdomen to create the slot for his fin/tail to be inserted. 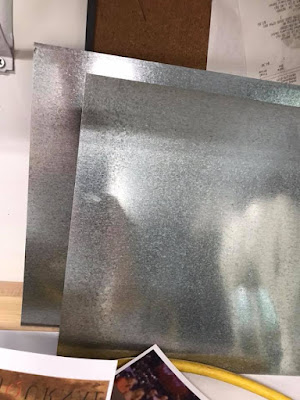 I also ended up completely reworking the front limbs and cut them, reshaped and extended each one from the joint. 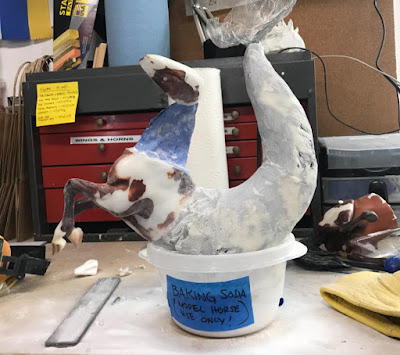 The tail was really challenging. Using my initial design as a guide, I cut the sheet metal and welded, screwed and shaped it to my liking. Three high tensile strength 18g music wires were welded down the removable insert which attaches the tail to the body. I could not have done this with help from my wonderful daddy. No matter ridiculous my ideas sounded, he always said, “Okay, I think we can do that.” It took many many, many hours of work and hard labor, but we did do it. And since it was time spent with my dad, it was endless fun! 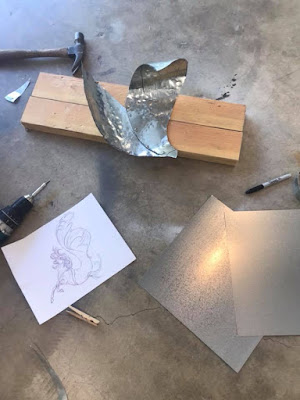 I etched the sheet metal on the fin/tail for “tooth” and poured a layer of resin over it. Then I dremeled it before beginning my final layer of apoxie. 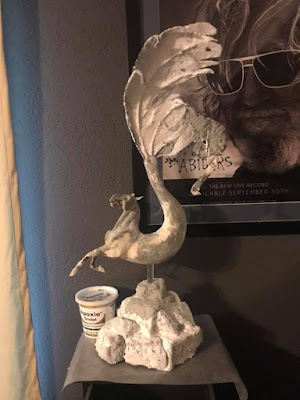 In this picture, I had just added the wires for his mane. 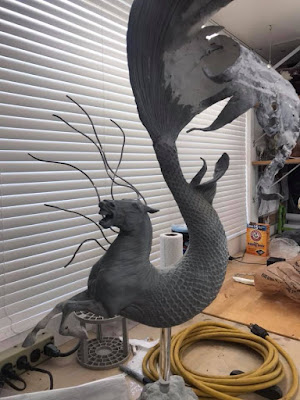 The wires were covered with armature wire  and soda glue. The mane is almost ready for the first layer of apoxie. 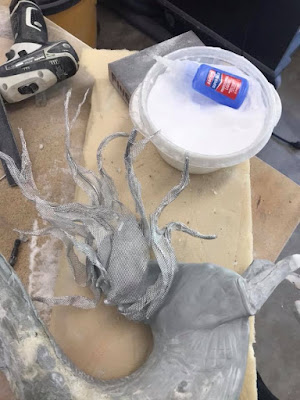 One layer shaped and dremelled. 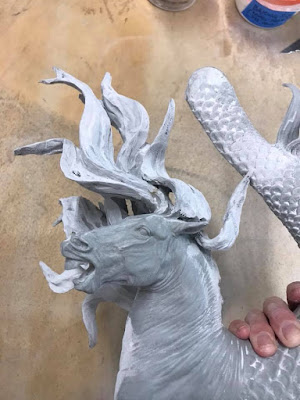 He's looking good here, but there was still a lot of work left to do. 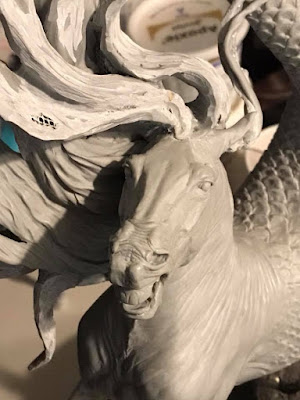 Because I worked in several different layers , I added food coloring to the Magic-Sculpt so I knew where I had put clay and where it still needed to be worked. 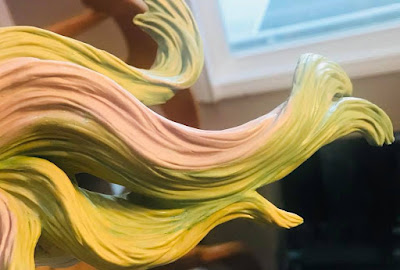 These are the tools I used to create the scales. 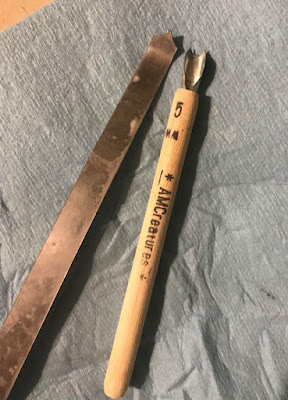 And here he is in his acrylics basecoat. 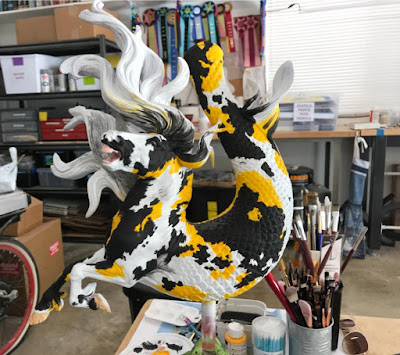 The ventral fins attach with magnets for safe travel and storage. 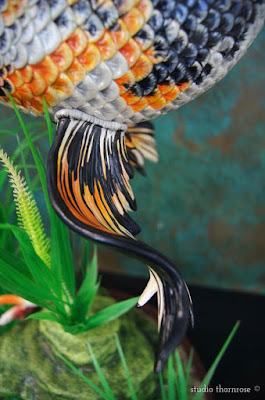 Since he was such a labor of love, I painted seven hearts  into his pattern. Can you find em all? 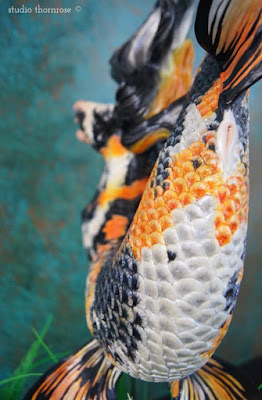 The base was made from boogie board foam cut into pieces and glued together. 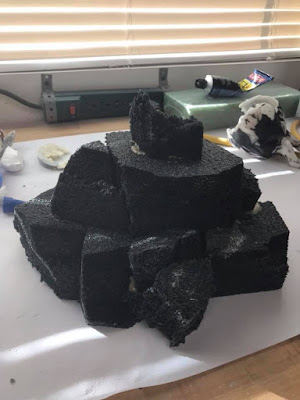 I poured a layer resin of resin on it and did some dremeling to give me a hard surface with “tooth” for my apoxie work. 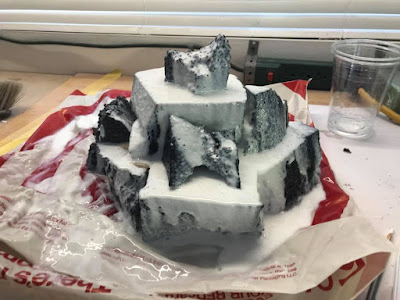 The wooden base had to be wide and sturdy to be able to support Takeshi's massive structure. My best friend, minion and base-maker made this beast for me on his CNC machine. 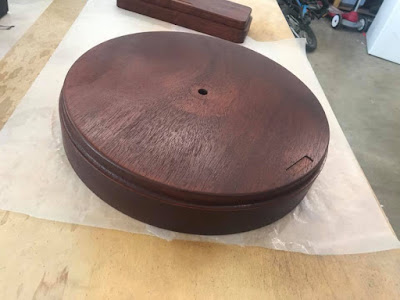 Here's the base after the final layer of apoxie... 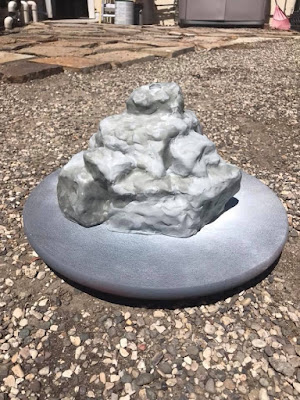 and here it is all finished up! 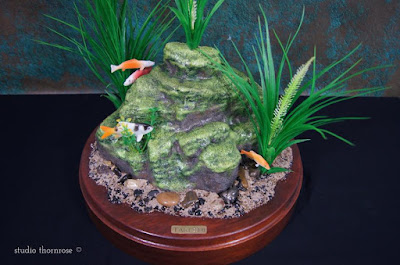 Takeshi's body weighs in at six pounds. His tail/fin is four pounds, and his base is fourteen pounds. When fully assembled, he stands thirty eight inches tall. 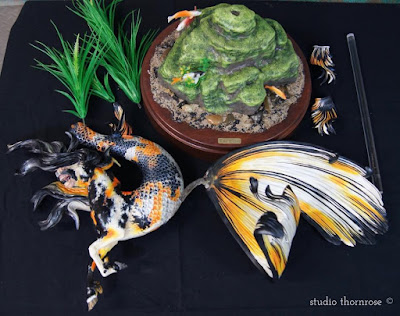 From start to finish, it took me nearly ten months to create Takeshi. Nearly every part of him had to be redone because I had no idea what I was doing. There were so many failures, but I knew I only needed to get it right once. Thank you to all my friends and family for the encouragement and support. I could not have done it without you!
Posted by Braymere at 3:35 PM