I have lots of old photos. Some are in albums, more are in boxes. It's not terribly organized, but there is a method to my madness. I can almost always find whatever photo I'm looking for. Along the way, I usually find others, too. Today's Throwback Thursday post is a lot of the horsey "others" from the 1970's and 1980's.

As best as I can determine, this is the first photo of me with a horse. It was taken in 1974. 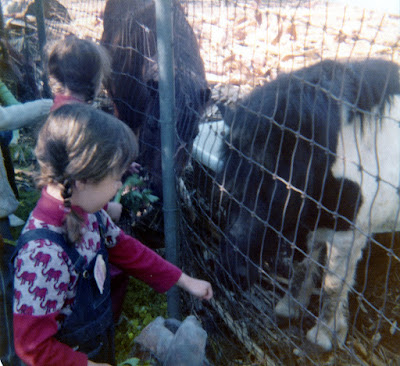 Two years later, my family vacationed on Catalina Island off the California Coast. The highlight of the trip was a visit to El Rancho Escondido, an Arabian breeding farm. 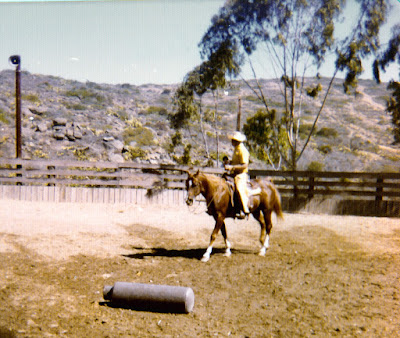 We met a foal who had been born on July 4, 1976. He was referred to as "the Bicentennial Colt." I thought he was the best and most perfect foal ever. 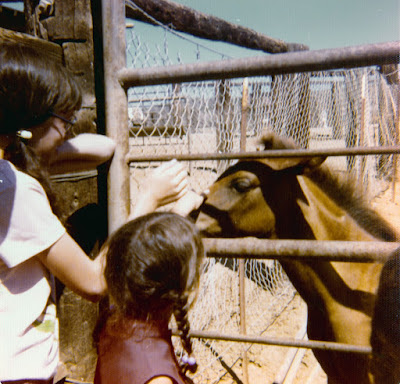 Of course, now I can no longer remember which one he was! 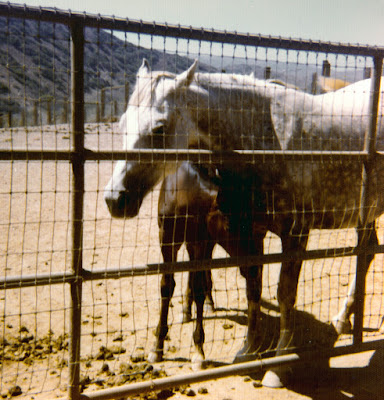 The next three pictures were taken at Eaton Canyon Riding Club in the early 1980's. The first is of Mariah, an off the track Thoroughbred who belonged to my riding instructor, Ann Armstrong. I loved this horse. Ann let me ride her one time, just at a walk. I was so happy. 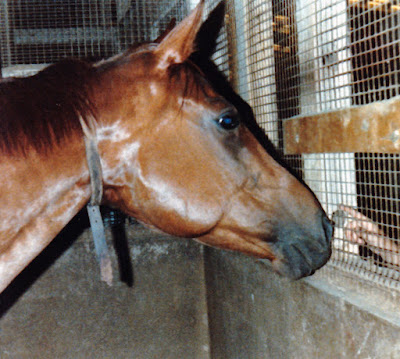 This is Annie and her lease horse, Oliver. Nearly all my riding friends leased Oliver at one time or another. I always hoped I'd get a chance at him, but that never happened. 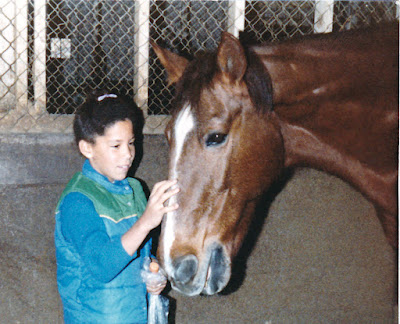 I didn't get to lease this one either, but I did take care of her for a couple weeks. Her name was Beautiful Masterpiece, but she was called Lady. She was a Saddlebred. 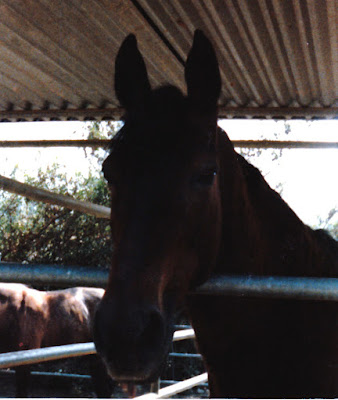 In the fall of 1983, I began riding at Siason Stables in Duarte, California. Although I often refer to this as "the barn with no adults," there were, in fact, a few adults when we arrived. One of them owned this Appaloosa. She'd had a bad accident a few years previously and could no longer ride. Instead, she was training Beau to pull a cart. 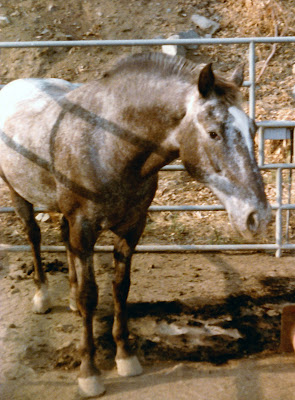 This is my friend Sarah with a pony named Bananas. He and his dam, Chiquita, shared the Siason pony pasture with "my" camp horses. 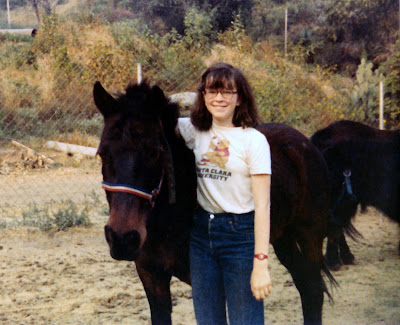 Speaking of camp horses... Whiskers was one of the best. This big Appaloosa was unremarkable to ride, but he had so much personality. One of my fondest camp memories involves Whiskers standing with all four feet on top of a picnic table! 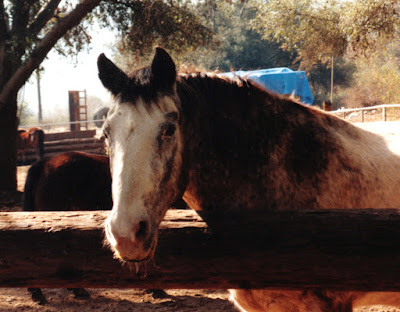 This mare, Sundance, belonged to one of my camp co-worker's sister. She was stabled in their backyard in suburban Los Angeles County. I took care of her a few times when the family went on vacation. 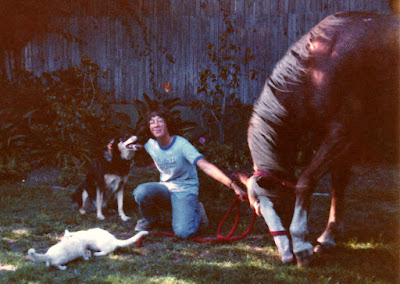 That should have been a lot of fun, but there really wasn't any where to ride. Mostly, Sarah and I took turns walking her up and down the street. 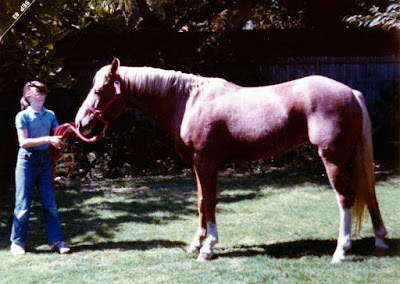 Before Liliana, my cousin, Jeanne, was the only other horse lover in my family. Unfortunately, Jeanne lives in New Hampshire and I've never met her. That hasn't stopped me from hanging on to this picture of her horse, Herschel, that she sent me sometime in the mid 1980's. 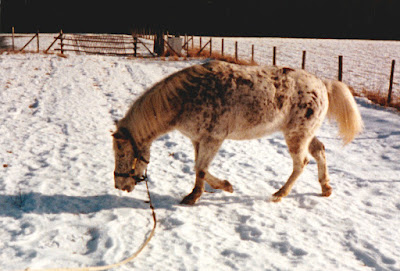 In 1987, I graduated from high school and moved to Fort Collins, Colorado to attend Colorado State University. My first year there was almost entirely horseless, except for that one time in the spring when my dorm floor decided to go on a group trail ride. 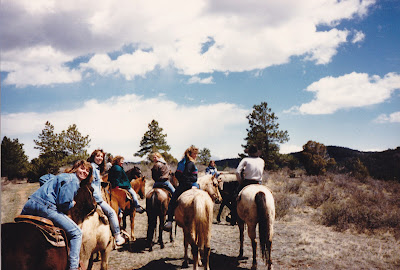 I was really excited and arrived at the stable earlier than everyone else. Instead of making me wait, the staff let me saddle up and take Dundee for a short solo ride. That was a wonderful and unexpected surprise. 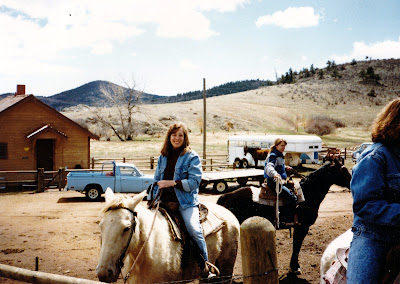 I returned to California for the summer of 1988 and worked as a file clerk at a savings and loan. That was exceedingly boring, but I did get to ride a lot. Most of my horse time was devoted to Chipper and Elliott... 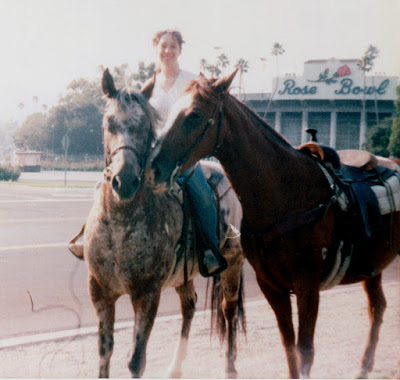 but I also took care of Rainsong for a couple weeks. 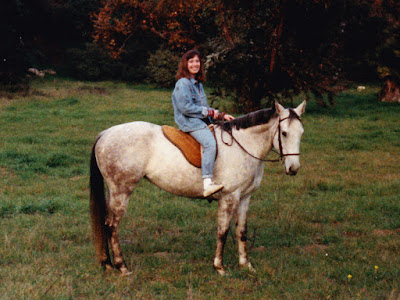 I was really excited about this because Rain was boarded at a nice barn. Unfortunately, as with Sundance, reality did not match expectations. Rain was lame almost the entire time I had her. Probably the only time I actually sat on her was to pose for these photos. 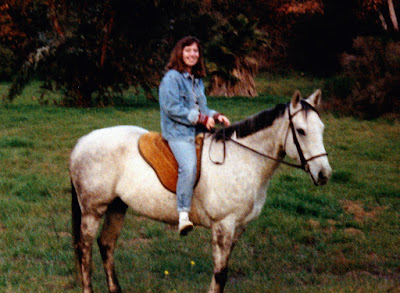 There's still a lot of old horse photos to share, but I'll leave the rest for another time. Thanks for joining me on this walk down memory lane!